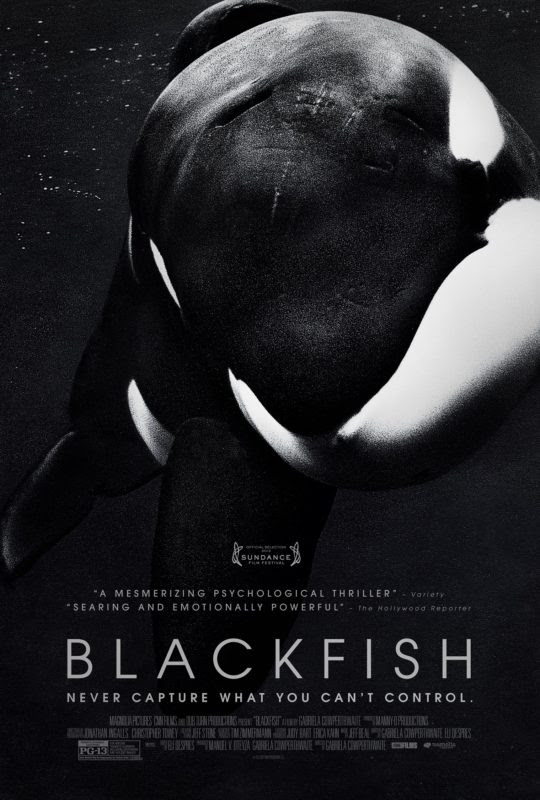 While watching the outtakes for the videos in Holiday leftovers from DNews and Tipsy Bartender, I found an unexpected sustainability moment in Outtakes Nutella Fireball Christmas.


Yes, Inna wished for zoos to be shut down and the animals released.  I can sympathize with her, although I can make a case for the value of zoos as both institutions of both education and conservation.*  What I found even more noteworthy was the Tipsy Bartender's recommendation of "Blackfish," the documentary that expands on the topic of The ethics of orcas as entertainment.  Here's the official trailer for the film.

BLACKFISH tells the story of Tilikum, a notoriously aggressive orca that killed three people while in captivity. Director Gabriela Cowperthwaite uses shocking footage and emotional interviews to present a convincing case against keeping these wild animals for human entertainment.

CNN is one of distributors of the movie and here is their segment promoting the film: "Blackfish" looks at whales in captivity.

The documentary "Blackfish" examines the treatment and well-being of killer whales in captivity.

I recommended this film to my environmental science students yesterday for extra credit.  I also warned them that this will be an uphill battle, as Americans love their entertainment and don't want it messed with.  As my friend Nebris has described my observations about the topic, I have written repeatedly that "Americans will take all manner of social, economic and political abuse, but will rise up with righteous fury when you disturb their Entertainment."  I told my students that, too.

*That written, I told my students that I thought it was a good idea that the Detroit Zoo gave up its elephants.  Unlike most other animals, elephants live shorter lives in captivity than in the wild, so it made no conservation sense to keep them.  Yes, people miss them, but there are animals that can be just as entertaining and educational and will actually benefit from being kept.

Also, one of my resolutions last year was to became a member of the zoo.  I didn't follow through.  I've rolled that over to one of this year's promises.  Here's to keeping it.
Posted by Pinku-Sensei at 8:28 PM