Blast from the past: Sarah Palin's Naughty Monkey Shoes 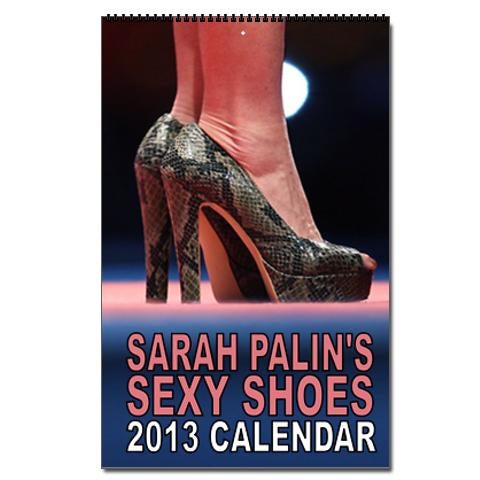 After posting Blast from the past: Joan Rivers vs. Sarah Palin, I remembered that I had another entry in the Daily Kos archives about Governor Palin, Palin's Naughty Monkey Shoes, which was also posted to my LiveJournal.  Since I'm in an "I can't be all DOOM all the time" mood and I can't resist another trip to the well, here it is.

As I was reading one of Vanity Fair's two recent articles on Sarah Palin, quite a few things struck me, both serious and silly.  I'm saving the serious ones for another post.  This entry is for the silly ones.


The first silly item that struck me was this blurb about her shoes.


An Amazon.com store called the North Star Group, maintained by a Palin blogger, "sells Governor Palin’s books, and numerous products she has referenced or is known to use," such as the red Naughty Monkey Double Dare pumps she often wears.

"[R]ed Naughty Monkey Double Dare pumps"--my first reaction was "those are 'fuck me' shoes!"  Just to confirm my impression of her footwear, I did a Google Image search for 'naughty monkey double dare' and found the following image on the first page of results. Yes, one of the first images retrieved by Google is one of Palin herself wearing red Naughty Monkey Double Dare pumps.  Not only does sex sell, sex sells Palin--and now Palin's supporters are selling sex to each other.

You can see where this entry is heading, as if the icon wasn't enough of a hint.  Before I continue there, allow me this diversion.

The very next sentence amused the anime fan in me.


As a side project to Conservatives4Palin, Joseph Russo in 2009 contributed to a separate pro-Palin blog called Fist of the North Star. The blog shares its name with a Japanese manga series set in a post-apocalyptic world devastated by nuclear war, in which a faithful remnant work to save their Heavenly Empress, who has been imprisoned by the corrupt Imperial Army.

Conservatives4Palin is a gold mine of political wank, but that's a subject for another post.  Time to get back on the path (I was once a national park ranger and a tour guide--it shows) and continue to the destination.

What was I talking about?  Ah, yes, shoes.


The shopping sprees continued through late October and were not, as previously claimed, mainly undertaken to clothe the family for the unexpected emergency of the Republican National Convention, in St. Paul. The number and range of items purchased for the entire Palin family—more than 400 in total—is mind-boggling. For Sarah, the campaign bought about 30 pairs of shoes,

I've compared Palin to Evita Peron before.  Maybe I should add comparisons to Imelda Marcos to my repertoire. roughly $3,000 worth of underwear (including many Spanx girdles), a pair of Bose headphones costing more than $300, and even her incidentals and toiletries. Charging a campaign for underwear would appear to be unprecedented.

I wonder if Palin bought any "power panties?" Now that the Vanity Fair article has appeared, I wouldn't be surprised if North Star Group started selling those, too.  Seriously, Palin would make a good spokesperson for Spanx, but she'd have to get in line behind Jessica Alba and Eva Longoria, both of whom show up on the first page of the Google Image search for Spanx. Vanity Fair isn't done with Palin's underwear, and neither am I.


One friend of the Palins’ remembers an argument between Sarah and Todd: "They took all the canned goods out of the pantry, then proceeded to throw them at each other. By the time they got done, the stainless-steel fridge looked like it had got shot up with a shotgun. Todd said, ‘I don’t know why I even waste my time trying to get nice things for you if you’re just going to ruin them.’ " This friend adds, "As soon as she enters her property and the door closes, even the insects in that house cringe. She has a horrible temper, but she has gotten away with it because she is a pretty woman." (The friend elaborated on this last point: "Once, while Sarah was preparing for a city-council meeting, she said, ‘I’m gonna put on one of my push-up bras so I can get what I want tonight.’ That’s how she rolls.")

Yes, I told you up top that this was a post about silly things, and it started off that way, but it sure isn't ending that way, is it?  This is really a post about how Sarah Palin uses her sex appeal for power, which reminds me of something I posted six years ago.

From 2000-2008, I was a regular participant on The Fourth Turning Forums.  A lot of politics were discussed there, and one particular topic kept coming up during 2002-2004--Hillary Clinton running for President in 2004.  The people who kept making that prediction were conservatives, not liberals.  The liberals all knew that Madame Clinton wasn't going to run in 2004 and had plenty of reasons why she wouldn't.  The conservatives on the site refused to listen.  At first, I thought they were expressing a "don't throw me into the briar patch" wish--they'd have loved to run against her, as they knew (and still know) what to expect and how to attack her.  Then, I realized something else--they were in lust with her.  I decided to call them out on it.

"I think you guys are predicting that Clinton is going to run because you have a hard-on for her.  Admit it, you want to jump her bones."

I thought telling them that would shut them up.  It did.  They had to wait until 2007 to start up again for 2008, when Madame Clinton did run.

Nowadays, there is a lot of speculation from both the left and right that Palin will run for president in 2012.  Unlike 2002-2004, I don't hear a lot of voices from Palin's side of the aisle saying that she's not running; most of the skeptical voices are coming from the left.  However, there are progressives who think she will run.  Some of them are very openly hoping for a "don't throw me into the briar patch" situation, as they think Obama would trounce Palin.  Others, however, don't seem to fit that pattern, and seem openly fearful.  I suspect that they also have a hard-on for Palin, just as the conservatives had for Clinton in 2002-2004.  Maybe if you all reading this find yourselves or other progressives obsessing over Palin running, you might ask yourself or the other progressive if they find Palin attractive, and see what happens.

So, what are the differences between Clinton six years ago and Palin now?  First, I think the liberals are more willing to admit the sexual attraction they have for Palin--I know I am--than the conservatives had for Clinton.  Second, Clinton actively discouraged people from speculating on her candidacy; she kept saying that she would not run in 2004, and she meant it.  Palin, on the other hand, is doing nothing to discourage speculation.  Finally, I don't recall Clinton playing up her sex appeal to enhance her power.  As you can read, Palin does it over and over again.

Like my previous "Blast from the past" entry, the Daily Kos version has lots of comments.  Click on the link and read them for yourself; they're worth it.

This may or may not serve as my Sunday entertainment entry.  However, I do think I have one more blast from the past to share: Anonymous 1, Oregon Tea Party 0.  Stay tuned.
Posted by Pinku-Sensei at 12:00 AM