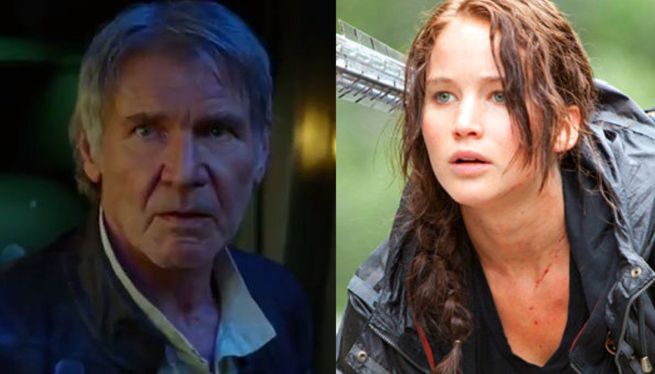 Since this blog has been all Star Wars all the time since Thursday, it should come as no surprise that the Entertainment Sunday entry is about "Star Wars: The Force Awakens."  Wochit Entertainment kicks off the coverage with 'Star Wars' Global Sales Hit $250 Million.

LOS ANGELES — "Star Wars: The Force Awakens" pulled in an estimated $250 million at worldwide box offices through Friday. The seventh "Star Wars" movie was also on track to finish its opening weekend with record U.S. and Canadian sales, the Walt Disney Co. said on Saturday. The film is projected to sell close to $220 million worth to tickets in the United States and Canada through Sunday, beating the record $208.8 million for "Jurassic World" in June, Disney said. Critics have hailed it as a fan-friendly return to form for the franchise; the American Film Institute listed it among its top 10 films of the year.

Reuters reported that the movie brought in $120.5 million from U.S. screens on Friday alone.  Not only was that enough to knock "Hunger Games: Mockingjay Part 2" out of the top spot at U.S. theaters, but advance sales broke the record set by "The Hunger Games" according to Comicbook.com.  The odds may have been in Katniss Everdeen's favor for four weeks on top, but The Force wasn't with her.

All that was just opening day.  Follow over the jump for the latest, along with a drink to celebrate the film's commercial success.

“Star Wars: The Force Awakens” micronized box office records this weekend, racking up a monumental $238 million opening and justifying the Walt Disney Company’s $4 billion purchase of Lucasfilm.
...
“This is a record that will stand for a long time,” said Jeff Bock, an analyst with Exhibitor Relations. “This gives us an idea of how much a movie can make on a particular weekend.”

Director J.J. Abrams’ nostalgic take on the series of space operas George Lucas created four decades ago was a hit with critics and fans, earning strong reviews and an A CinemaScore. Its opening soared past the previous high-water mark of $208.8 million established last summer by “Jurassic World.” It more than doubles “The Hobbit: An Unexpected Journey’s” December record debut of $84.6 million.

Globally, “Star Wars: The Force Awakens” scored the second-biggest opening in history, earning $517 million worldwide, behind only “Jurassic World’s” $525 million bow. Unlike “Jurassic World,” the seventh film in the “Star Wars” franchise did not have the benefit of showing in China on its inaugural weekend. It opens there on Jan. 9.

The second place film was "Alvin and the Chipmunks: The Road Chip" with $14.4 million, which was angling for a younger audience than "The Force Awakens."  "Sisters" came in third with $13.4 million, followed by “The Hunger Games: Mockingjay – Part 2” and “Creed,” for fourth at $5.6 million and fifth at $5.1 million, respectively.

I'd normally post a review or two, but my wife and I are planning on seeing the film on Tuesday, so no spoilers today.  Instead, I'm repeating what I did for "Jurassic World" and posting a drink from Tipsy Bartender to celebrate the box office records: Star Wars Cocktails: The Jedi vs The Sith and The Darkside of The Force!

Bottoms up and may The Force be with you!