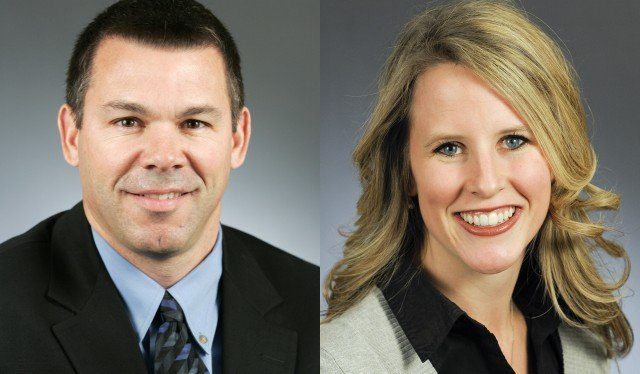 It's not just Michigan's Todd Courser and Cindy Gamrat acting like "dinghy lovebirds."  Minnesota has its own part of hot-to-trot state legislators, Tim Kelly and Tara Mack.  TomoNews US reports in Minnesota lawmakers caught 'making out' in car park say they were exchanging documents.

A couple of Minnesota lawmakers are scrambling for cover after news they were busted for allegedly making out in a car park late last month recently leaked out.

Lawmakers Tim Kelly and Tara Mack who are both married, but not to each other, vehemently deny the accusation, contained in a public nuisance citation from a park ranger.

The citation stems from an incident that took place at around 4.30pm on August 25 in a Lebanon Hills Regional Park parking lot in Eagan.

Dakota County Parks Ranger Jordan Moses said he approached two vehicles that were illegally parked, where he found the male occupant of the vehicle, Kelly, 'was making out with female in car. When I approached the female's pants were unzipped and pulled down.'

What's with Republican lawmakers in states beginning with MI?

At least one Michigan legislator is taking no chances of being caught up in this mess, as MLive reports.


Michigan state Rep. Tim Kelly, R-Saginaw Township, took to Facebook to clear up any confusion: "Apparently there is a State Rep in Minnesota making the news named Tim Kelly who's philandering with another elected official, much like MI's own Courser/Gamrat fiasco. THIS IS NOT ME!!!!"

Thanks for clearing that up.

For what it's worth, the snarky Taiwanese animators have not yet put together a video about Courser and Gamrat.  I've asked if they could.  I'm sure the results would be hilarious, but I'm content to wait.

Speaking of waiting, please stay tuned for the regular Sunday entertainment entry.
Posted by Pinku-Sensei at 12:00 AM