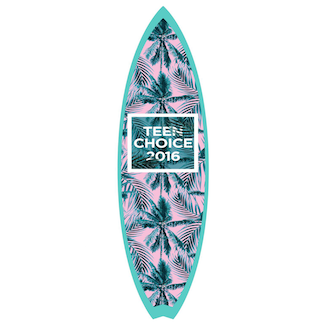 
That's it for the nominees in the main movie categories.  I'll return by next Sunday with the rest, which are a little sillier.  Stay tuned!

It's next Sunday, so it's time to follow through with the rest of the movie nominees from Wikipedia.

I'll start off with the last of the categories with nominees from "Star Wars: The Force Awakens."

Every single nominee is from a speculative fiction film, so any one of them would be OK with me.  As for which one will win, I still think it will be a "Star Wars" sweep or close to it, so I'm expecting it will be Adam Driver.  He can put the surfboard next to the shelf where he keeps his 2016 Saturn Award for Best Supporting Actor.

Yes, Ryan Reynolds had a good hissy fit, but nothing like Kylo Ren's.

I expect Driver will win this award, too.  Two surfboards for Darth Tantrum! Follow over the jump for two categories that recognize the heroes, including one in which I don't think a "Star Wars" sweep is deserved, along with the rest of the nominees.

Now for the heroes.

Ridley and Boyega are far from the best pairing in the movie.  Daisy Ridley has better chemistry with BB-8 and Harrison Ford than with John Boyega, and he has better chemistry with Oscar Issac.  None of them hold a candle to Ford and Carrie Fisher, but that's a grown person's perspective.  I'm sure the teens are going "ew, gross!"  As for who I think deserves this award, it's probaly Shalene Woodley and Theo James, but the surfboard will probably go to Jennifer Lawrence and Josh Hutcherson.

I have higher hopes for Boyega and Ridley in the next category.

Both of them deserve it, but only one can win.  I expect it will go to Ridley.  After all, she's really the protagonist.  As for who could beat either of them, I'd pick Gal Gadot as Wonder Woman.  For why, see the next category.

I thought she was with you.

Now for a category that explains my picks for Chemistry.

Personally, I'd go for either Henry Cavill and Amy Adams or Chris Helmsworth and Jessica Chastain, but I'm not the target audience for the show.  I think they should go for Woodley and James, but they'll probably vote for Lawrence and Hutcherson.

Those are the movies just past.  What about the present?

Out of this lot, I'd pick "Finding Dory."  It's got the highest box office of the bunch.  That's one prediction.  The other isn't about these awards, but the Razzies.  Four of these movies are sequels or remakes and at least two of them will be nominated for "Worst Remake/Ripoff or Sequel."  My money is on "Ghostbusters" and "Independence Day: Resurgence."  "Ghostbusters" will be undeserved as the work of misogynists stuffing the ballot box, while "Independence Day" will deserve the dishonor.

Based on box office, I'd say Dwayne Johnson.  Chris Helmsworth might sneak by, but that movie isn't about him.

I'd vote for either Ellen DeGeneres or Melissa McCarthy, but I wouldn't put it past this electorate to give the surfboard to Blake Lively.

Now for the future.

The film I'm most anticipating is "Rogue One."  Next is "Star Trek Beyond."  With this electorate, I expect it will be "Suicide Squad."  Still, all but "Jason Bourne" are speculative fiction films, so I expect this one will be a win for the genre no matter what.

Out of these fields, the most talented actors are both in "Jason Bourne."  That's not whose going to win.  I bet it will be a pair from "Suicide Squad."  Also, a western?  I'm surprised anyone has thought of making one this century!

Enjoy the awards.  I'll be back at midnight with posts for a new month.
Posted by Pinku-Sensei at 8:00 PM