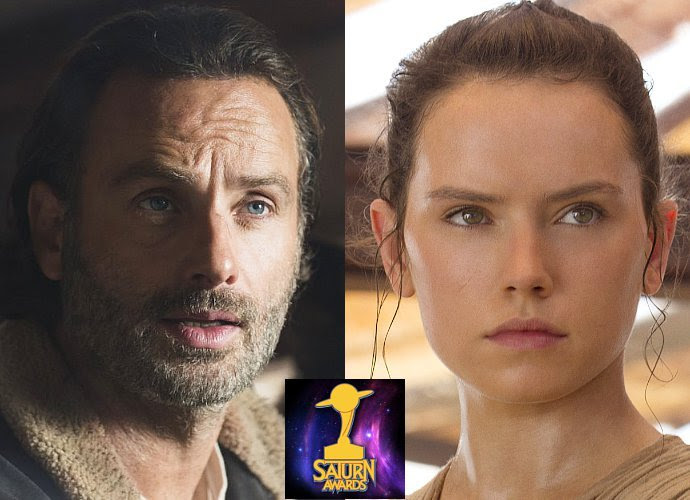 Last Wednesday the Academy of Science Fiction, Fantasy, and Horror Films gave out the Saturn Awards, which I wrote about during May.  Variety has the story in ‘The Force Awakens’ Rings Up Eight Saturn Awards

I suspected there would be a "Star Wars" sweep and it almost happened as the film earned eight awards.  It only missed Actress in a Leading Role (as I had been hoping, that went to Charlize Theron for "Mad Max: Fury Road"), Actress in a Supporting Role (it went to Jessica Chastain for "Crimson Peak"--see my comments below), and director (Ridley Scott got it for "The Martian').  A lot of those weren't my choices, but they were what I expected the electorate for these awards to pick, so I was not surprised by any of them.

It deserved all of these, even supporting actress, although just barely.  Alicia Vikander may be a better actress overall and "Ex Machina" would not have worked without her subtle performance, but the Saturn voters are not about subtle.  Chastain was much more flamboyant in her role as Lady Lucille Sharpe and that appealed to the Saturn electorate.  The only surprise was that "Crimson Peak" didn't win Best Costuming; that went to "Avengers: Age of Ultron."  Superheroes beat a period piece.

That wasn't quite a sweep for "The Walking Dead."  Bruce Campbell won for Actor in a leading role ("Ash Vs. Evil Dead") and William Shatner for Guest Star ("Haven").  I'll let Campbell describe the Saturn Awards electorate.

Bruce Campbell summed up the vibe of the Saturn Awards — and the emotions of the audience — from the podium: “All the A movies are B movies now,” said Campbell. “If you dress up like a bat, and fly around a city called Gotham, that’s a B movie. If you’re bitten by a radioactive spider, that’s not only a B movie, that’s a cheesy ’50s B movie. So thank you, B movies, for leading the way so A movies finally understand what entertainment is.”

If chins could kill, Campbell would be dangerous.

I'm not done with the television season just ended.  The Emmy Awards will be announced July 14.  Stay tuned.
Posted by Pinku-Sensei at 11:01 AM