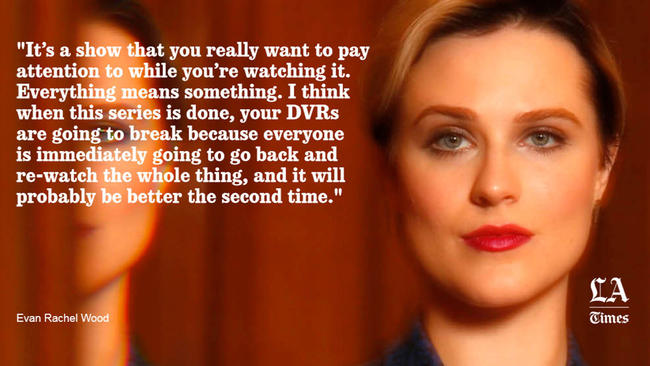 I'll return to reality shortly, but I'm still in an "I can't be all DOOM all the time" mood, so I'm going to mention what I think is the best science fiction show on TV right now, "Westworld."  It really deserves a more thorough entry than this, which I promise I'll get to, but for today I'll just let Evan Rachel Woods describe her experience as Dolores Abernathy, one of the "Hosts" of "Westworld."  From Late Night with Seth Meyers, Evan Rachel Wood Calls Westworld the Acting Olympics.

Westworld star Evan chats with Seth about the challenges of playing a robot and the cast's favorite plot theories.

Not only was that hilarious, it made me appreciate her performance even more.  She really does an excellent job.

As for the show, it's not the usual post-apocalyptic fare that I cover here, although this could become one, as the themes of The Singularity and associated robot revolt are written into the source material, but it's utterly engrossing, even if it's slow getting to the main plot.  My reaction to the first three episodes was "that was awesome, but I don't know if it went anywhere."  Just the same, I expect it will be a big winner at next year's Emmy Awards, if for no other reason than the next season of "Game of Thrones" won't air until Fall 2017, so it won't be eligible for awards this season.

I'll end with a reading recommendation, 'Westworld' stars explain how the series confronts contemporary issues of human nature and the fembot from the L.A. Times.  It's where I got the image and quote of Evan Rachel Woods above.  There are more from the rest of the cast, along with more analysis of the show.

With that, reality tomorrow, I promise!
Posted by Pinku-Sensei at 12:00 AM