Space photographs as art and other space and astronomy news 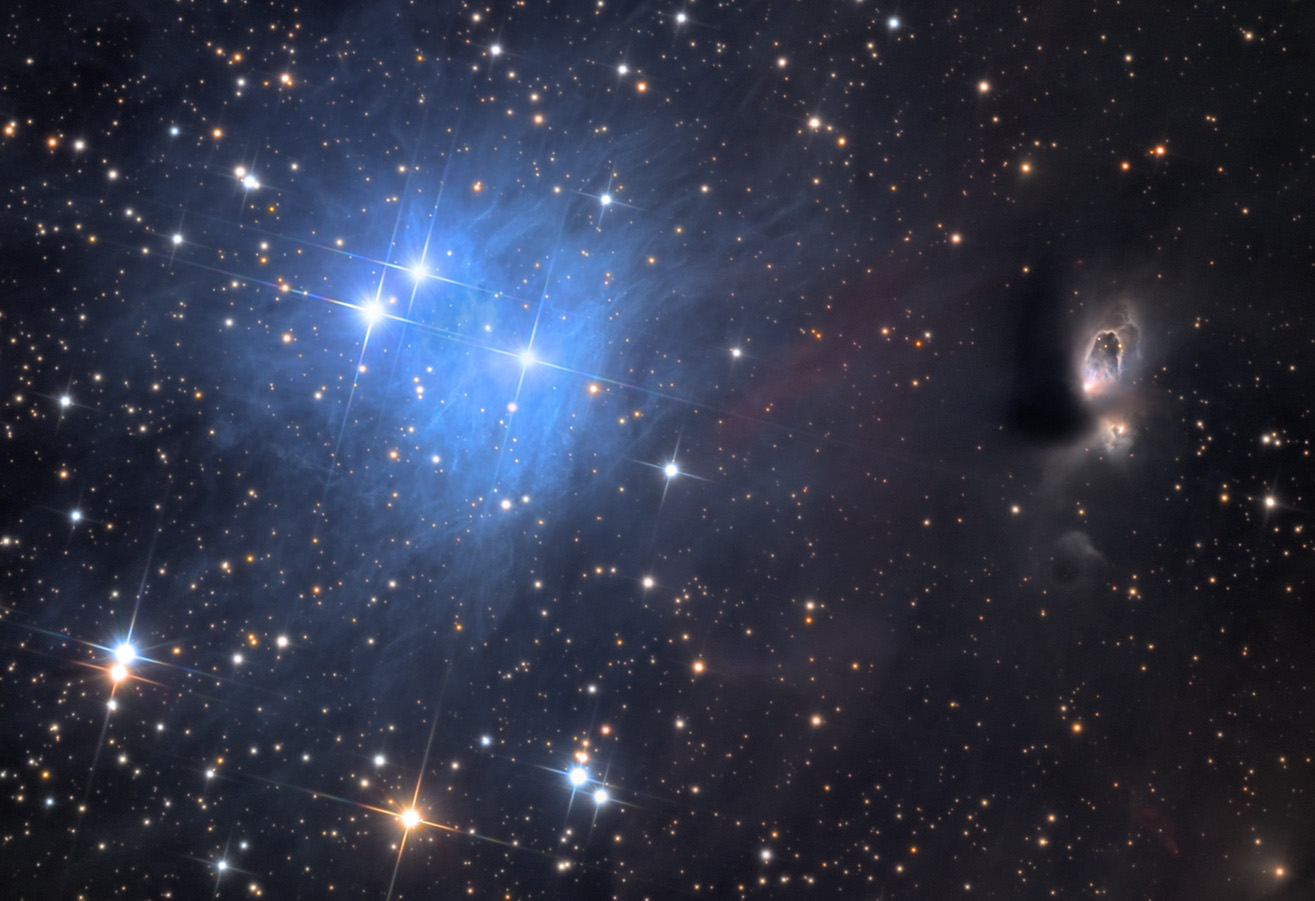 University of Arizona: Adam Block and the Cosmic Canvas
Adam Block, astrophotographer and astronomy educator with the UA's Mt. Lemmon SkyCenter, has been selected to receive the Advanced Imaging Conference Hubble Award to honor his work in "bringing the cosmos to the people."
By Daniel Stolte, University Communications
October 29, 2012


Adam Block, astrophotographer and astronomy educator with the University of Arizona's Mt. Lemmon SkyCenter, has been selected to receive the Advanced Imaging Conference Hubble Award to honor his work in "bringing the cosmos to the people." Block received the award at the annual Advanced Imaging Conference held Oct. 26-28 in San Jose, Calif.
...
NASA regularly features his images on its "Astronomy Picture of the Day" website, such as this image of Reflection Nebula vdB1 (used as the illustration above--P.S.). Hundreds of Block's photos have appeared in magazines such as National Geographic, Scientific American, Astronomy, Sky & Telescope, Arizona Highways, Coelum, Astronomie and The Practical Astronomer. Space.com has featured a score of his images as its image of the day.

"Adam's pictures draw people in and facilitate their thinking about science," said Alan Strauss, director of the Mount Lemmon SkyCenter. "One of the things that distinguishes our outreach efforts from similar public programs is that Adam's photographs are used so widely. The images are beautiful, and they awaken a curiosity and an appreciation of science in general, and astronomy specifically."


To patrons of fine art, space might seem like a foreign frontier but the monOrchid art gallery in downtown Phoenix will bring the two together when it hosts dozens of images taken from NASA’s Lunar Reconnaissance Orbiter Camera (LROC).

The Lunar Reconnaissance Orbiter (LRO) is a NASA mission that is a precursor to the return of humans to the Moon. LROC, which is one of seven instruments aboard the orbiter, is run from the Tempe campus by principal investigator Mark Robinson.

This unusual exhibit will feature LROC images of the Moon depicting impact craters, ancient lava flows and the Apollo landing site where astronauts first stepped onto the lunar surface. The exhibit will premiere Nov. 2, during the First Friday art walk in downtown Phoenix, and remain open from 5 to 10 p.m. every Friday in November. MonOrchid is located at 214 E. Roosevelt St., in downtown Phoenix.

“The Moon is a really beautiful place,” said Robinson, creator of the exhibit. “These are like Ansel Adams images of the Moon.”

The SpaceX Dragon capsule that splashed down Sunday in the Pacific off Mexico's Baja California coast is back on dry land. Its recovery ship returned the spacecraft to San Pedro, California, laden with more than 3-quarters of a ton of cargo from the International Space Station, much of it related to science experiments conducted in space to benefit us here on Earth. Also, successful spacewalk; Endeavour's new digs; Atlantis' final move; KSC's future; Curiosity report; and more!

DarkSyde on Daily Kos has more in This week in science: Sandy.

Now, the rest of the news, from the outer reaches of the Solar System to inside our own cells.


Dedicated only six months ago as the nation’s largest instrument of its kind devoted to public outreach and citizen science, the 32-inch Schulman Telescope at the Mt. Lemmon SkyCenter has shown that it can do more than offer awe-inspiring glimpses into the universe to those who travel up the mountain to participate in a public program about objects in the night sky.

Taking advantage of the telescope’s ability to be operated remotely via the Internet, Tomas Vorobjov, an amateur astronomer in Slovakia, discovered a previously unknown comet hurtling along its orbit around Jupiter.


Like a Hollywood starlet constantly retouching her make-up, the giant asteroid Vesta is constantly stirring its outermost layer and presenting a young face. Data from NASA's Dawn mission show that a common form of weathering, which occurs on many airless bodies in the inner solar system like the Moon, does not age Vesta’s outermost layer.

Carbon-rich asteroids have also been splattering dark material on Vesta's surface over a long span of its history. The results are described in two papers reported on Nov. 1 in the journal Nature.


PASADENA, Calif. -- Initial experiments completed by NASA's Mars rover Curiosity have shown the mineralogy of Martian soil to be similar to that of weathered basaltic soils of volcanic origin in Hawaii. Investigators with Curiosity's Chemistry and Mineralogy (CheMin) experiment, including Indiana University Bloomington geologist David Bish, discussed the results Tuesday.

"Much of Mars is covered with dust, and we had an incomplete understanding of its mineralogy," said Bish, CheMin co-investigator and the Haydn Murray Chair of Applied Clay Mineralogy in the Department of Geological Sciences in the College of Arts and Sciences. "We now know it is mineralogically similar to basaltic material, with significant amounts of feldspar, pyroxene and olivine, which was not unexpected."

The identification of minerals in rocks and soil is crucial for the Curiosity mission's goal to assess past environmental conditions. Each mineral records the conditions under which it formed, while the chemical composition of a rock provides only ambiguous mineralogical information.


BLOOMINGTON, Ind. -- As the evening sky darkens during November, Mars will appear 10 degrees high in the southwest an hour after sunset for viewers around 40 degrees north latitude. The red-orange planet will show little detail in a telescope, and it will set an hour later.
...
The annual Leonid meteor shower will peak before dawn Nov. 17. The moon will set earlier in the evening, so in a dark sky, up to 20 meteors per hour may be visible. To see the most meteors, get away from city lights. The shower's radiant, the point from which the meteors appear to come, will be in the constellation Leo the Lion. The bright star Regulus is part of Leo and can serve as a marker for the radiant. The farther sickle-shaped Leo climbs above the eastern horizon, the more meteors there will be all over the sky. The Leonid meteors are caused by streams of dust particles from Comet Tempel Tuttle.
...
The first total eclipse of the sun in more than two years will happen Nov. 13-14. The sun's shadow will skim northern Australia and then cross the South Pacific and the International Date Line.

University of Arizona: Classroom on the Mountaintop
UA doctoral student Pacifica Sommers' project has opened doors for elementary and middle school students to become acquainted with the sky islands and the sky itself, paving the way to developing multi-day natural science and astronomy immersion programs at the UA's Mt. Lemmon SkyCenter.
By Shelley Littin, University Communications
October 31, 2012


The stars blaze out of a sky darker than ever can be seen from central Tucson atop the 9,157-foot-high summit of Mt. Lemmon in the Catalina Mountains northeast of the city. The wind blows colder through the pine trees, the air is thinner and free of the smells of fast food and car exhaust, and apart from the wind, nights are almost silent.

Originally a U.S. Air Force outpost equipped with high-power long-range radar sets, the site atop Mt. Lemmon played an important role as part of about 200 radar stations along U.S. coastlines and borders, scanning the skies for potential enemy bombers and missiles during the Cold War.

Since 1970, the Mt. Lemmon Field Station has served a gentler purpose: University of Arizona astronomers and national and international research teams have turned its six telescopes to searching the skies.

Operating under permit from the U.S. Forest Service, the UA Steward Observatory launched the Mt. Lemmon SkyCenter in 2008, aiming to utilize the facility's astronomical observing equipment and extraordinary location atop a sky island for public outreach and education purposes.

I'm going to miss using stories from the University of Arizona and Arizona State University in future Overnight News Digests. I'll wean myself away this week, as I'll use stories from public research universities in the competitive states that came through either for Obama or for Democratic U.S. Senate candidates. Sorry to write that Arizona wasn't one of them. After that, I'll have to rely on more conventional sources, like the one I used for the final story.


RALEIGH, N.C. — Physicists racing to detect the mysterious substance known as dark matter are thinking outside the box by looking inside the cell. A new proposal for tracking dark matter particles relies on strands of DNA.

All the ordinary stuff in the universe, from the atoms in people to the hot plasma in stars, makes up only about 5 percent of the universe’s mass and energy. Nearly one-quarter of the universe is composed of dark matter. (The rest is an even more puzzling entity known as dark energy.) Though several experiments claim to have detected dark matter, the results don’t agree and aren’t definitive.

Katherine Freese, a theoretical physicist at the University of Michigan in Ann Arbor, proposed October 28 at the New Horizons in Science meeting that a new kind of DNA-based detector could not only spot a leading candidate for dark matter, called WIMPs, but could also determine incoming particles’ direction of flight.

That's it for last week's news. Time to collect this week's.
Posted by Pinku-Sensei at 12:01 AM