Mutate now and avoid the rush 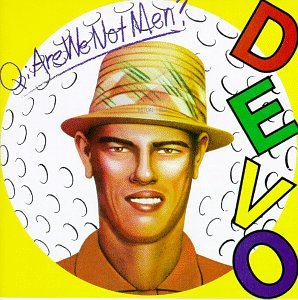 I decided to open my response to tonight's The Burden of Denial at The Archdruid Report with a little levity--with a point.


Greer: Readers of classic science fiction may find all this weirdly reminiscent of a scene from some edgily updated version of H.G. Wells’ The Island of Doctor Moreau: “Not to doubt Progress: that is the Law. Are we not Men?”

Me: We are Devo!  Sorry, couldn't resist.  Just the same, my smart-aleck outburst serves a purpose, which is to point out that the idea that the U.S. had reached a zenith in the 1960s and has be in decline (de-evolving) ever since has been around since the late 1970s, even the response to it at the time was "mutate now and avoid the rush," which was meant as a joke, instead of "collapse now and avoid the rush," which our host means seriously.

It turns out that the resemblance in Devo's call and response in "Jocko Homo" to the passage from H.G. Wells was not a coincidence; it was a deliberate tribute, as a review of the song on All Music points out.


This twisted new wave classic was Devo’s first single and quickly became an anthem for the group’s fans. The lyrics hinge upon the group’s humorous theory that mankind is devolving instead of evolving, a theme that is stated plainly on the rousing "Are we not men/We are Devo!" chorus ( note: this question was lifted from the classic novel The Island of Dr. Moreau). Elsewhere, the lyrics take potshots at ‘civilized’ society with lines like "Monkey men all/In business suit/Teachers and critics/All dance the poot" before going into a reworking of Charles Darwin’s evolution theories that closes with the statement "God made man/But a monkey supplied the glue." It’s a heady array of ideas for just one song but "Jocko Homo" works like a charm thanks to a tight melody that packs plenty of punch into its slender frame by interspersing its hypnotic rising-and-falling verse melody with an exciting call-and-response chorus. Devo’s original recording of "Jocko Homo" combined garage-rock guitar with primitive synthesizer burbles over a stomping midtempo beat to create a deliciously lo-fi backing for their de-evolution lesson. It was released by the group on their own Booji Boy label and became an underground favorite with the growing new-wave moment. The group later re-recorded it in a slicker, faster version for their Warner debut Q: Are We Not Men A: We Are Devo. Both are energetic and witty, but most hardcore Devo fans prefer the rougher original. "Jocko Homo" also became a permanent part of Devo’s live repertoire and was occasionally reworked, the most notable alternate version being the mock-solemn acoustic version that appears on the live album Now It Can Be Told.

I've been a fan of Devo for 35 years,* and I had no idea that the lyrics included a reference to H.G. Wells novel of vivisection and animal uplift gone wrong.  Thanks to Greer for inspiring me to find that out.

On that note, pun intended, here's the original video of Jocko Homo.


*That makes it even more amazing that I've never mentioned the band here before.  I guess the occasion never presented itself until now.  That's twice now that Greer has given me one of those.
Posted by Pinku-Sensei at 12:00 AM