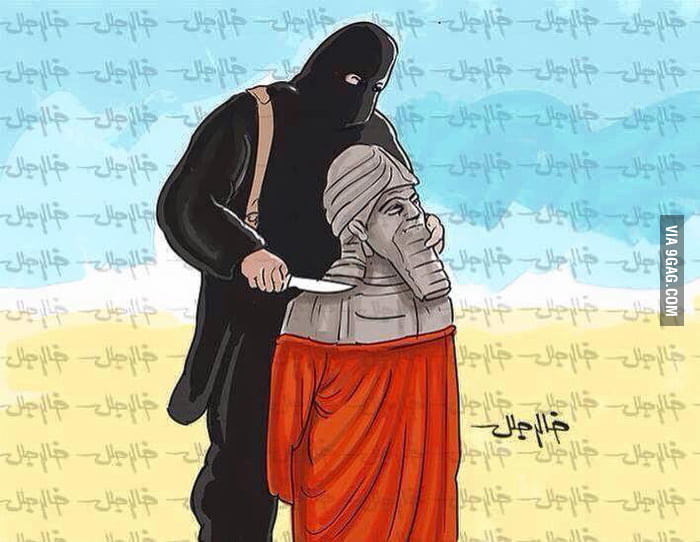 I concluded Holidays for the fourth year of Crazy Eddie's Motie News with another program note.


I plan two more entries in this series, the next about movements I really detest and the last about winners from the back catalog.  Stay tuned.

Leading off tonight's retrospective about detestable reactionary movements is last year's 14th most read entry, What the Sith Jihad wants includes science crime scenes with 443 page views.  It earned its readership through promotion at first Greer's then Kunstler's blogs.  I shared the link at The Archdruid Report on June 25, 2014, the same day I posted it at my blog.


As for an "age of charismatic warlords," you're right; the U.S. isn't there yet, although I doubt it's a coincidence that one of our cultural icons is a tormented fictional mobster named after the high female voice in a choir, one that the real Governor of New Jersey is [nick]named after. On the other hand, one can look at two states in collapse, Iraq and Syria, and see what an organized band of would be 21st Century feudal warlords is doing over there.

I opened my comment a little differently at Clusterfuck Nation.


“ISIS is behaving in a psychopathic manner.”

No kidding, and they’re following the same playbook that the Taliban did in Afghanistan and Ansar Dine in Mali.

Even though I started the two comments differently I ended both the same way.


They seem to be intent on starting a Dark Age on fast forward by destroying the cultural artifacts of rival traditions, among their other violent acts...Yes, I call ISIS "The Sith Jihad." That's because I was twitting another blogger, Elaine Meinel Supkis, who thought they looked like Jedi. I told her that they looked more like Sith. My readers liked the comparison, so the name stuck.

Readers at both sites liked the Sith reference.  Here are the ones I got in the comments to Greer's post.


@Nathaniel Ott wrote: "@ Pinku-Sensei if it's alright with you I am totally stealing 'The Sith Jihad' for conversation with my fellow Star Wars nerd buddy who I'm sure is going to get drunk with the darkside and go absolutely bonkers over the term!"

Be my guest. It's a meme and memes are meant to be spread through imitation.

Thank you. If it weren't for Elaine Meinel Supkis providing the inspiration, I probably wouldn't have thought of it.

At Kunstler's blog, the quote I responded to and included attracted the attention.


Seawolf77: I disagree. They are wholly calculating. They are goading America and the West to come back in; in fact they are begging. To tell you the truth I am surprised they haven’t found some babies in incubators and … well you get the picture.

Me: The two claims, that ISIS AKA the Sith Jihad is psychopathic and that it is acting in a calculated manner, are not mutually exclusive. Psychopaths can be quite calculating. As for the American response, give it time.

The Sith Jihad has continued with their science and culture crime scenes, but I only managed to post once more about them, wishing May Pazuzu curse the Sith Jihad.  As for the U.S. response, that took only a couple of months, with the fear premium returning as U.S. bombed the Sith Jihad in August.

Follow over the jump for other entry about detestable reactionary movements that made last year's top 20.

Completing the recap of the 20 most read entries from the previous blogging year is Recycled comments about the men's rights movement posted on June 6, 2014.  It garnered 425 page views to end the year in 15th place.  I got a lot of page views from promoting that entry on social media, especially in groups that had interacted with the Men's Rights Activists online and disliked them as a result.  It took me a while to get around to sharing it on Kunstler's and Greer's blogs.  I first mentioned the entry about three weeks later at Clusterfuck Nation.


In “Coasting Toward Zero,” our host stated that “We surely don’t know what to do about relations between men and women.” That was the week after an unstable person under the influence of the Men’s Rights Movement killed a bunch of his fellow students at UC Santa Barbara. I first encountered the Men’s Rights Movement online, and I thought they were a sick joke, so I played one on them. At the end of my experience, I concluded they were disturbed enough and organized enough to be almost dangerous, like the Sovereign Citizens Movement. After the past year, I’ve decided both have graduated to becoming minor yet real threats.

Janos Skorenzy AKA Vlad, who never met a regressive cause he didn't like, responded aggressively.

I replied by throwing the vampire into the sun.


Impaler, did you even bother to click on the link? If you had, I you’d find I was actually hiding a favor for the MRA people online inside the trick I was playing. I was proposing giving them a safe space to discuss their ideas. They didn’t want it. Instead, they’d rather be in an environment where they could be as big a bunch of jerks as they wanted despite the risk of ridicule and attack. In the process, they exposed themselves as a bunch of organized loonies. That’s what I didn’t like about them, not any of the positions you listed. Next time, attack what I actually write, not some strawman you construct.

I never have cared much for Vlad, who is in appropriate company with the subjects of this retrospective.

A full month passed before I shared the link at The Archdruid Report.


I was involved in a group online that not only debunked UFOs but also other weird ideas as well as making fun of stupid net tricks. In fact, that's the group where I first used the Pinku-Sensei identity. As one of the debunkers, I can give an explanation for why we would dig in. Even though your explanation is a perfectly naturalistic one that has been supported by the evidence, it would kill the debunkers to admit that the saucerheads, as we called them, were right about anything, especially a government coverup. We got called "paid government disinformation agents" regularly, which both annoyed us and amused us, as we were doing it mostly for the LULZ. We could always count on a hilarious spittle-filled reaction from the saucerheads when we teased them. That was our reward.

Fortunately, the UFO enthusiasts were a harmless bunch, if very loopy. The men's rights movement, which a commenter on your "Fate of Civil Religions" post called an anti-religion to feminism, were a different matter. They were both nutty and organized enough to be dangerous, something I recognized eight years ago.

If anything, the Men's Rights Advocates (MRAs) and their ilk have gotten worse since then, although they are not in the same league as the Sith Jihad.

That completes this look back at the 20 most read entries of the past blogging year.  Stay tuned for the final installment about posts from the back catalog that made big moves on the leaderboard last year after a celebration of Earth Day.