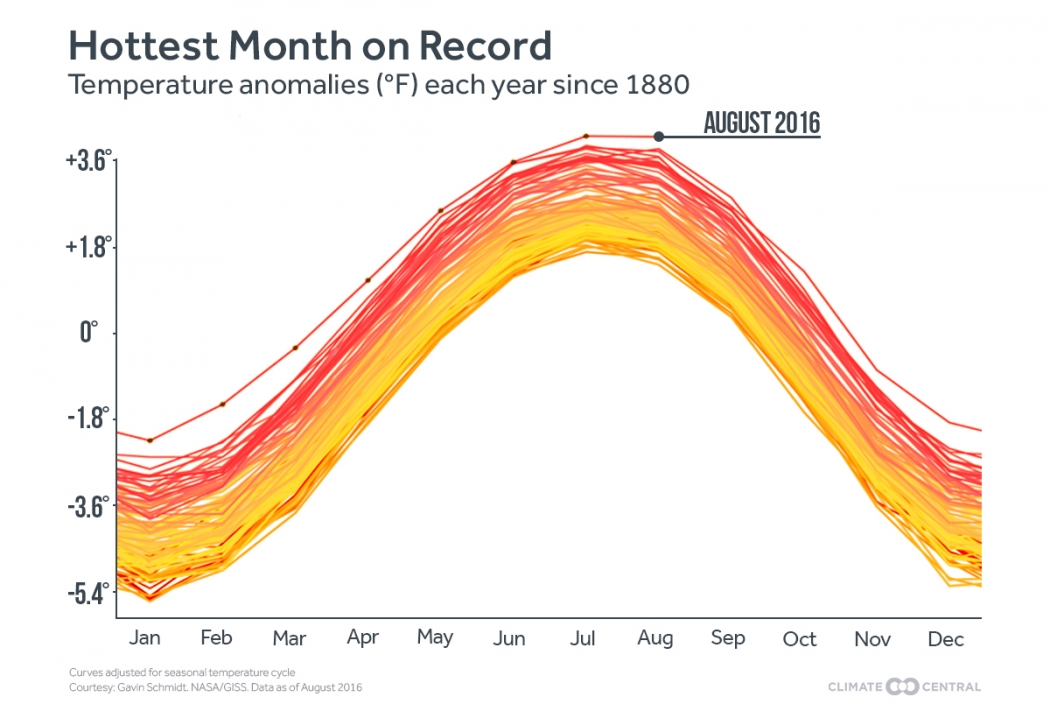 The past 11 consecutive months have set record temperatures.

The unprecedented streak of record-hot months that the world has experienced over more than a year just tacked on one more month: Data released Tuesday by the National Oceanic and Atmospheric Administration showed last month was easily the hottest August on record.

That makes 16 straight record-hot months, unparalleled in NOAA’s 137 years of record-keeping. The previous record streak was only 10 months, set in 1944. NASA’s data, released earlier, also said August was record hot, not to mention tying for the hottest month the planet has ever recorded.

As for the bigger picture...

Though there are still several months left in the year, it is a virtual certainty that 2016 will be the hottest year on record, and by a significant margin. While global temperatures can fluctuate from year to year, 2016 is serving as something of an exclamation point for the long-term trend of warming driven by the buildup of heat-trapping gases in the atmosphere.

Welcome to the 400 PPM world, as Scientific American reported.

In the centuries to come, history books will likely look back on September 2016 as a major milestone for the world’s climate. At a time when atmospheric carbon dioxide is usually at its minimum, the monthly value failed to drop below 400 parts per million.

That all but ensures that 2016 will be the year that carbon dioxide officially passed the symbolic 400 ppm mark, never to return below it in our lifetimes, according to scientists.

Right after the Paris Agreement on Climate being signed on Earth Day, the planet's temperature may blow past the 1.5 degrees Celsius threshold, meaning it was too late.  Yes, this is still a doomer blog.
Posted by Pinku-Sensei at 9:25 AM