Stop the limbo, get back on the rollercoaster

My price observation in Corner station challenges competitors to limbo then chickens out noted the following.

Monday...it was asking...$3.04.  The two-year low for the entire neighborhood, not just the corner station.  The next day, it raised its price to $3.35.  So much for asking the rest of the stations in the area "how low can you go?"

Just the same, prices are locally higher than all averages except the statewide one.  Gasbuddy.com shows the metro Detroit average as $3.22 and still rising.  The national average is up only slightly to $3.20.  The Michigan average is at $3.28, which is still lower than the corner station.  When the local prices stop rising, I fully expect the neighborhood stations to return to their usual pattern of being a dime lower than the metro area average.  That may not end up as low as $3.15, as Oil-price.net shows that crude prices are up today, with Brent rising $1.31 (1.22%) to $107.12 and WTI up $0.84 (0.89%)to $93.88.  Too bad Brent sets gas prices, not WTI.

As for what's causing the rise, Reuters blames Libya supply outages.  Follow over the jump for their explanation.


Oil futures on both sides of the Atlantic rose more than $1 per barrel on Wednesday as support from Libyan supply outages offset forecasts for increases in U.S. stockpiles.

Libyan exports remain disrupted by strikes and protests, and the head of Italian oil company Eni SpA said the situation was getting worse.

"The market has turned its focus on more protests in Libya and production not coming back online, and that's surfacing in short covering in WTI," said Gene McGillian, analyst with Tradition Energy in Stamford, Connecticut.

There's also some churn in the market as investors are buying oil futures.

Uncertainty about how soon the U.S. Federal Reserve will begin to scale back its monetary stimulus also prompted traders who were short U.S. oil to buy contracts and cover positions.

The U.S. stock market doesn't seem to be affected by the uncertainty, as Dow, S&P end at record highs on Macy's, Yellen.

The Dow and the S&P 500 ended at record highs on Wednesday as strong results from Macy's (M.N) lifted consumer discretionary shares and investors bought stocks in anticipation of remarks by Janet Yellen, who is likely to become the first woman to lead the Federal Reserve.

U.S. stock index futures rose to session highs after the bell following the release of Yellen's introductory remarks, ahead of her confirmation hearing on Thursday to succeed Fed Chairman Ben Bernanke. Yellen, who is the Fed's vice chair, will appear before the Senate Banking Committee.
...
The Dow Jones industrial average .DJI rose 70.96 points, or 0.45 percent, to end at 15,821.63, a record close. The Dow also hit an all-time intraday high of 15,822.98. The Standard & Poor's 500 Index .SPX gained 14.31 points, or 0.81 percent, to finish at 1,782.00, which was both a record closing high and an all-time intraday high.

I'm still looking for stocks to peak and then decline, but I've been doing that for most of the year.  However, I'm not alone, as Naked Capitalism thinks we're in a stock bubble.

A new era has dawned: there is now a consensus that this is a stock market bubble. We’re back where we were during the last bubble, or the one before it, though the jury is still out if this is February 2000 or October 1999 or sometime in 2007. How do I know it’s not just some intrepid souls on the bleeding edge who are claiming this, but a consensus?

Bubble data keep piling up relentlessly. IPOs so far this year amounted to $51 billion, the highest for the period since bubble-bust year 2000, the Wall Street Journal reported. Of them, 62% were for companies that have been losing money, the highest rate on record. Follow-on offerings by companies that already had their IPO but dumped more stock on the market amounted to $155 billion, the highest in Dealogic’s book, going back to 1995. And throughout, the DOW and the S&P 500 have been jumping from one new high to the next.

It’s even crazier in the land of bonds, where issuers are dreading the arrival of higher interest rates – which have already arrived. And they’re pushing everything possible out the door while prices are still high. So far this year, $911 billion in bonds were issued, also a Dealogic record. Emerging-market bond issuance hit $802 billion, a notch below their all-time record last year, but emerging-market bonds went into tailspin during the summer taper-talk, which slowed things down temporarily.

These ominous clouds have been billowing up on the horizon for a while, but nothing is a bubble until enough people say it’s a bubble. And today, shortly before 10 a.m. Pacific Time, it officially became one.

I heard it on the last place where you normally hear this kind of thing, on KQED Public Radio in San Francisco, on Forum, a local show. Host Michael Krasny was chatting with New York Times writer Nick Bilton about Twitter as part of Bilton’s book tour. This isn’t exactly Max Keiser’s whiplash-inducing Keiser Report. This is soft-spoken public radio.

Twitter's and Pinterest's IPOs look a lot like Pets.com's to some observers.  The difference is that I think both services still have the capability to become profitable.  Whether they will before the market reaches its cyclical high is another question, one I can't answer.  Too bad.  I actually have enough money to invest.

In the meantime, here's to the Twitter bird avoiding the fate of the Pets.com sockpuppet. 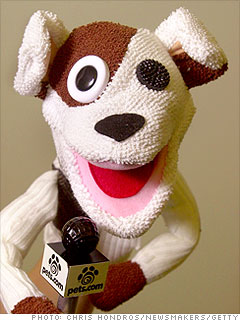