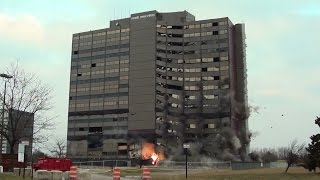 Last Sunday, the college where I teach imploded an old office building on a property it acquired.  I could have gotten up early and watched it in person, but I decided to sleep in and hope that the demolition would be such good television that I could watch it on YouTube.  I was not disappointed.  There were quite a few videos of the event.  The best one so far is the following from Controlled Demolition, Inc., the company that set the explosives, which shows the implosion from multiple angles.  It also includes the sounds of the countdown and the spectators cheering.

The next best was shot from a drone that overflew the building during and after the implosion.  In my opinion, it does the best job of showing the aftermath.

The implosion and aftermath of the North Park Plaza skyscraper in Southfield, MI USA. Filmed via DJI Phantom 2 Quadcopter.

The North Park Plaza was a 42 year old 17 story office tower which had been vacant for several years. It was purchased by Oakland Community College (OCC), which is currently planning future uses for the soon to be vacant land.

That pile of rubble was what greeted me as I drove into work the next day.  I'm still getting used to the building being gone.

It turns out that OCC is not the only college that will demolish a former commercial property it now owns.  Follow over the jump for news from the other side of the state.

Michigan State University Board of Trustees has authorized the demolition of the former Grand Rapids Press building located in downtown Grand Rapids, Michigan, on property the university acquired in 2012.

The building to be razed is on a site of approximately 4.3 acres, positioned immediately west of the Michigan State University College of Human Medicine’s Secchia Center.

“Demolition allows MSU to build a facility that best achieves the goals inherent in biomedical research that requires high tech laboratories and allows for the site to have maximum flexibly for future development,” said Vennie Gore, MSU vice president for Auxiliary Enterprises.

The MSU administration plans to recommend to the board this winter, construction of the Grand Rapids Biomedical Research Center on a portion of this site. The remainder of the site may be divided into parcels for future development by the university and/or private developers.

The budget for this project is $3 million. Funding will be provided through the university’s general fund and tax-exempt financing with debt repayment from a variety of sources including the general fund.

Demolition is scheduled to begin in March 2015, with final completion of demolition by December 2015.

Here's to both colleges' plans for urban renewal coming true.