Marching for science in Ann Arbor 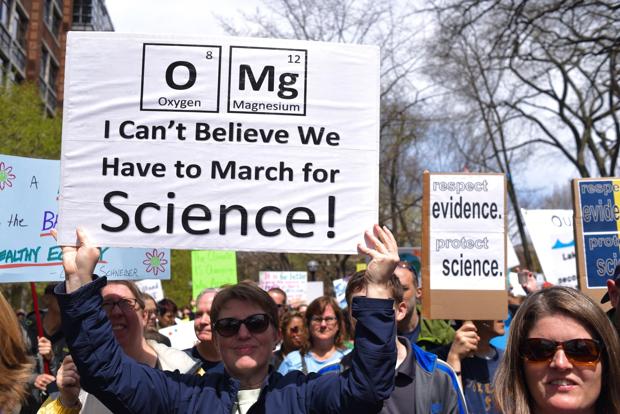 I promised four times that "'I'm planning on posting a first-hand account of tomorrow's March for Science in Ann Arbor sometime next week,' just like I did for the Women's March."  It's time to follow through.

I learned my lesson from the Women's March to arrive early so that I could get parking.  Then, I managed to get inside a structure that had one space available after dealing with traffic backups and no parking all the way from the freeway to downtown.  This time, I parked in the nearest structure to the start of the march nearly an hour early when it had 300+ spaces open and had no congestion to speak of.  I was able to get a coffee, stroll to the Diag, find a restroom, and sit on the benches around the edge of the paved area in front of the library, where about 1,000 people had already congregated.  There I sat for about fifteen minutes as more people assembled.

Unlike both the Women's March and Tax March, which began at the Federal Building and ended at the Diag for speeches, the Science March started with an hour of speeches at the Diag and then proceeded to the Federal Building.  One of those speeches was by State Representative Yousef Rabhi, who also addressed the crowd at the Tax March.  Like the Tax March, MLive recorded him speak.


State Rep. Yousef Rabhi, D-Ann Arbor, who spoke during the rally, estimated there were easily more than 10,000 people there, possibly as many as 15,000.

"I think this is about as many people as came out to the Women's March in Ann Arbor," Rabhi said, referring to the Jan. 21 march that drew more than 11,000. "This is amazing, and a beautiful day. The earth is smiling upon us."

At the time, I didn't believe him, as it didn't feel as crowded as it did during the Women's March speeches.  After looking at the video, now I do.  That was a much larger group than I thought at the time, which was halfway through the hour of people talking to the protesters.  While I don't think more people attended than the Women's March, I now think it was close.  If the Women's March had 11,000, then the March for Science in Ann Arbor had 10,000.  I guess the decision to start with the speeches first and march later paid off in terms of attendance.

Rabhi also called out all of the people protesting Line 5 under Mackinac and told them (us, as I was one of them) to hold our signs up high.  We did.  I felt both proud and useful, more so than at the Women's March.

Follow over the jump for more that happened at the Ann Arbor March for Science.

MLive quoted another speaker at the rally.


Dan Ezekiel, a recently retired Ann Arbor science teacher who serves on the Washtenaw County Parks and Recreation Commission, was one of the speakers at the rally on the Diag. He said he's concerned about the direction the country might be headed under President Donald Trump.

"I think the new administration doesn't seem to understand how integral science is to many needs in our society," he said. "They're talking about defunding basic research and medical research, environmental protection. Those are very scary trends and we need to make sure to emphasize how vital science is to our wellbeing as people and as a country."


Rackham student Chiamaka Ukachukwu spoke to the crowd about her experience in the her lab studying biofilm formation in e. Coli and why she was marching for science. She emphasised the importance of working together and increasing strength through numbers and participation. She then read a spoken-word poem to the crowd referring to the need for inclusivity and equality, particularly of minority groups, within the scientific community.

“I look like a scientist because I am one,” Ukachukwu read.

She referenced Henrietta Lacks, a Black woman who died of cervical cancer in 1951, but whose cells — extracted from her body without her consent — have been used to make critical advances in cancer research. She also referenced Katherine Johnson, a Black female physicist who is recognized for her vital contributions to NASA space missions.

LSA senior Yiran Emily Liu, a researcher at Michigan Medicine's Comprehensive Cancer Center, discussed some of the injustices that science has enabled and also stressed the significant social responsibility that scientists have.

“I saw this (march) as a tremendous opportunity to not only defend science as an institution on authority but also to present some of the challenges and dark history,” Liu said in an interview after her speech.

Liu also commented on student involvement and said she hopes the students that were present at the march take the opportunity to interact and talk about science.

“I think that this is a great opportunity for University students to see the vast range of people that are showing up that are scientists or science supporters who might not necessarily be in academia or go to the University,” Liu said.  “I think something that could be improved about science is its accessibility and interaction with the entire community and I think this event is a perfect example of that.”

[Scott] Barolo was the last speaker. He emphasized the importance of learning and encouraging one another in scientific fields.

“We’re marching today for a lot of different reasons,” he said. “To me this march is for us — scientists and friends and allies of science. Let’s remember to take care of each other. Let’s remember our duty as public servants to teach and our duty to listen and learn from others. Let’s remember our humility in the face of our own ignorance. Lets remember that science is and should be for everyone, and let’s challenge each other to do better.”

I couldn't agree more with these statements.

After the speeches ended, the assembled multitude marched to the Federal Building.  MLive recorded that, too, in Thousands march through Ann Arbor during March for Science.

I mentioned that Ann Arbor's march had creative and correctly spelled signs in abundance.  This video shows some of them.  50 signs spotted at the Ann Arbor March for Science and Ann Arbor community flocks to the Diag for local March for Science have even more, one of which I used to illustrate this entry.  I hope my readers appreciate them as much as I did.  I also hope that the marches around the world and especially here in the United States weren't just fun, but also have the intended effects of maintaining and increasing support for science.
Posted by Pinku-Sensei at 7:32 AM