Tax marches across the country and in Michigan 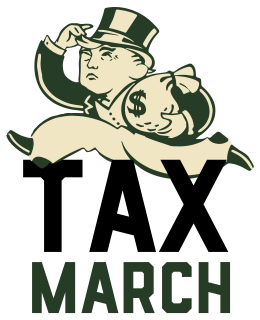 While Tax Day is actually tomorrow, April 15th is still traditionally considered the deadline to file federal income taxes.  Since it also fell on a Saturday and the U.S. has a President who refuses to release his tax returns, it was also the perfect opportunity for Americans to march in favor of his doing so.  CBC's The National reports Thousands of protesters call on Trump to release taxes showing several of these demonstrations.

Demonstrators held 'tax marches' in cities across the country Saturday, calling for U.S. president to release the last 10 years of his tax returns.

I love the Trump chicken, which first appeared in Happy Year of the Fire Rooster!  It's the perfect symbol for him on this issue.

The National didn't mention it, but there were protests in Michigan, too.  The Detroit News listed marches in Ann Arbor, Detroit, Farmington, Hamtramck, Grand Rapids, Pentwater and Marquette.  The largest was in Ann Arbor, which had nearly 1,000 more attendees than Detroit.  Follow over the jump for videos from MLive covering the protest.

When I wrote that Ann Arbor had nearly 1,000 more protesters than Detroit, I meant it literally.  The Detroit News reported 400 participants.  MLive's headline for its video reads More than 1,300 protesters join in Tax March in Ann Arbor.

Like the Ann Arbor Women's March, the march ended at the Diag on the University of Michigan campus, where speakers addressed the crowd.  The first was Robert Joseph speaks at Tax March rally in Ann Arbor.

Joseph is founder and chairman of Progressives at the University of Michigan.

MLive recorded three of the politicians who spoke to the crowd.  The first is Ann Arbor School Board member Susan Baskett, who I've known since our sons were in Cub Scouts together 25 years ago.


It's good to see her in the news.  I just wish that MLive had posted all of her speech.

Next is State Representative Yousef Rabhi, who is a friend of mine on Facebook.


That was an inspiring speech, right up there with Donna Lasinski, who spoke at the Women's March.  Speaking of politicians at the Women's March, the headliner then was Debbie Dingell.  She repeated that role last Saturday, when she spoke to the Ann Arbor Tax March crowd.

The U.S. congresswoman from Michigan called on President Donald Trump to publicly release his tax returns.

Looks and sounds like she did just as good a job Saturday as she did at the Women's March.

The protest appeared to be a lot of fun.  I'm sorry I missed it.  I won't miss the March for Science on Earth Day.  I'll report back to my readers how that went.  Stay tuned.
Posted by Pinku-Sensei at 9:19 AM