The solutions devised here will be exported, including the bad ones

Remember what I wrote about the importance of Detroit for the rest of North America?

Whatever Detroit devises as the solutions for North America's problems will be exported to the rest of the continent.

This includes the bad ideas--and does Michigan (not Detroit, but Detroit Public Schools have been where the idea has undergone proof of concept) ever have a bad idea for you. Take it away, Rachel.


The bill has been approved and has already been applied. From WOOD-TV 8's YouTube channel:


A state-appointed emergency financial manager has suspended the decision-making powers of cash-strapped Benton Harbor officials in a move that's likely the first of its kind under a new state law.

If you want more details, check out the Michigan Messenger post.

The Emergency Financial Manager of the city of Benton Harbor has issued an order stripping all city boards and commissions of all their authority to take any action.

The order, signed Thursday, limits the actions available to such bodies to calling a meeting to order, approving the minutes of meetings and adjourning a meeting. The bodies are prohibited under the act from taking any other action without the express authority of the Emergency Financial Manager, Joseph Harris.

Benton Harbor isn't the only municipality or district affected. The Michigan Messenger has more.

In Flint, which received state approval for an $8 million emergency bond needed to make payroll this month and is seen as a likely target for state intervention, the firefighters union has reportedly issued a list of new concessions including increased health insurance payments and giving up holiday pay and night-shift premiums.

Just the threat of a Emergency Financial Manager being appointed for Flint is enough to get municipal unions to make concessions. Imagine what effect actually having one would have. Actually, you don't.

In Pontiac, which along with Benton Harbor, Ecorse and the Detroit Public School system already has an emergency financial manager in place, local police voted to dissolve their union last week.

Who needs to tear up union contracts when unions will decertify themselves?

Just the same, at least one union isn't rolling over in the face of the threat.

The state teachers union, the Michigan Education Association, whose members now face possible cuts because of the new law, has asked its local units to vote by April 15 on whether the union should “initiate crisis activities up to and including job action.”

“The legislation being considered on a daily basis at the Capitol (emergency managers, step freezes, mandatory privatization, mandatory health insurance payments, budget cuts, etc.) are outright attacks on our students, our members, our communities and our future. And we must take action accordingly.”

Salters said that a vote for more intense union action would demonstrate that MEA is not willing to stand silent while Michigan’s public schools and middle class are under attack.

I have a copy of that letter in the room with me. I found it both heartening and astonishing--heartening that my union is standing up for itself, astonishing because public teacher strikes are illegal in Michigan. Looks like the next school year will be an interesting one.

As for the idea being exported, there are reports that it's already happening.

A well known political player in Wisconsin, Ed Garvey, is reporting that Scott Walker is now preparing his next assault on the democratic political process in the State of Wisconsin.

Following the lead of Michigan GOP Governor Rick Snyder, Walker is said to be preparing a plan that would allow him to force local governments to submit to a financial stress test with an eye towards permitting the governor to take over municipalities that fail to meet with Walker’s approval.

According to the reports, should a locality’s financial position come up short, the Walker legislation would empower the governor to insert a financial manager of his choosing into local government with the ability to cancel union contracts, push aside duly elected local government officials and school board members and take control of Wisconsin cities and towns whenever he sees fit to do so.

Such a law would additionally give Walker unchallenged power to end municipal services of which he disapproves, including safety net assistance to those in need.

The post on Forbes continues with a statement that "the plan is being written by the legal offices of Foley & Lardner, the largest law firm in the state, and is scheduled to be introduced to the legislature in May of this year." Keep that information in mind, as it allows plausible deniability.

For what it's worth, Walker's office is denying this report.

Appearing on Wisconsin radio station WTMJ today, Governor Walker has denied the truth of this story.

No truth to it whatsoever. Absolutely a bogus story.
Absolutely false. The interesting part is that it’s false in both contexts. One: There’s nobody on my staff, nobody in my administration, I’m certainly not working anything remotely close to that.

Remember what I pointed out that allows "plausible deniablity?" The report is that a law office is drawing up the plan, not anyone in the Governor's office. Walker's denial doesn't address that point.

Secondly, it begins with the fact that he said the next Democratic assault. I’d like to know what the first one was.

First, it's not a "Democratic assault," it's an assault on the democratic political process. The way he phrased it makes it look like the Democratic Party is doing something. Second, I can't believe he said "I’d like to know what the first one was." Hey, Walker, the bill to restrict collective bargaining was the first one!

It's time to imbibe heavily. I have just the drink for it. 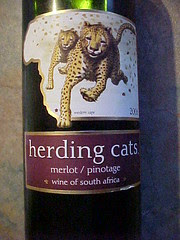 Cheers!
Posted by Pinku-Sensei at 3:33 AM