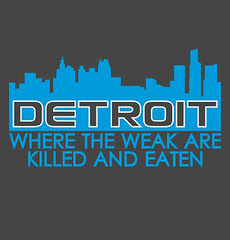 Key questions in the data include:

• Will Detroit’s population slip below 800,000 residents for the first time in 100 years?
• Which local communities managed to buck the trend and grow?
• How has the diversity of the suburbs and the city changed?
• What percentage of Michigan houses are still occupied?

They just got their answer.

Census figures were released to the Free Press by a government source who asked not be identified because the data has not been released publicly. The figures also show Wayne County’s population stands at 1,820,584. Oakland County stands at 1,202,362 and Macomb stands at 840,978.

This is a breaking story. I'll have an update overnight tonight when the official figures come in.

On another note, greetings to all of you coming here from Clusterfuck Nation! I had no idea so many of you would drop on by from a single link in his comments. You managed to overwhelm all of my friends from Livejournal.  I know I promised all of you a review of Kunstler's site in my comments, but today isn't the day for that review. It's not that I don't have a lot to say about him; I do, but I can always repackage my opinions on a slow news day.  Today is not a slow news day.
Posted by Pinku-Sensei at 12:48 PM