Not a Fan: Driving

As I wrote a week ago on Crazy Eddie's Motie News:


I'm all in favor of living closer together. I've had enough of car-culture suburban life and more than my fill of living out in the country. I'm also in favor of making cities more energy and resource efficient. I've already seen the light of how urban living can be a good thing, so I am one of those people who already lives close to a downtown and walks to the store. Six years ago, I drove 48,000 miles a year. Now I drive less than 10,000. I'm much happier driving much less.

This morning, which was technically yesterday, Yuki the Kia* passed another milestone, when her odometer flashed 209,000 miles, which means it's time for another driving update to see if I'm doing my part in driving less.

The last time I posted a mileage check was 1000 miles and three months and 10 days ago on March 10, 2011. At that time, it took me 3.25 months to drive 1000 miles, which mean I drove an average of 308 miles/month during that time. This time, it took me 3.33 months to drive that same distance, which means I drove exactly 300 miles a month. I'm still doing my part to keep the number of miles driven by Americans down, as shown on the following graph from Calculated Risk, which came out yesterday. Perfect timing! 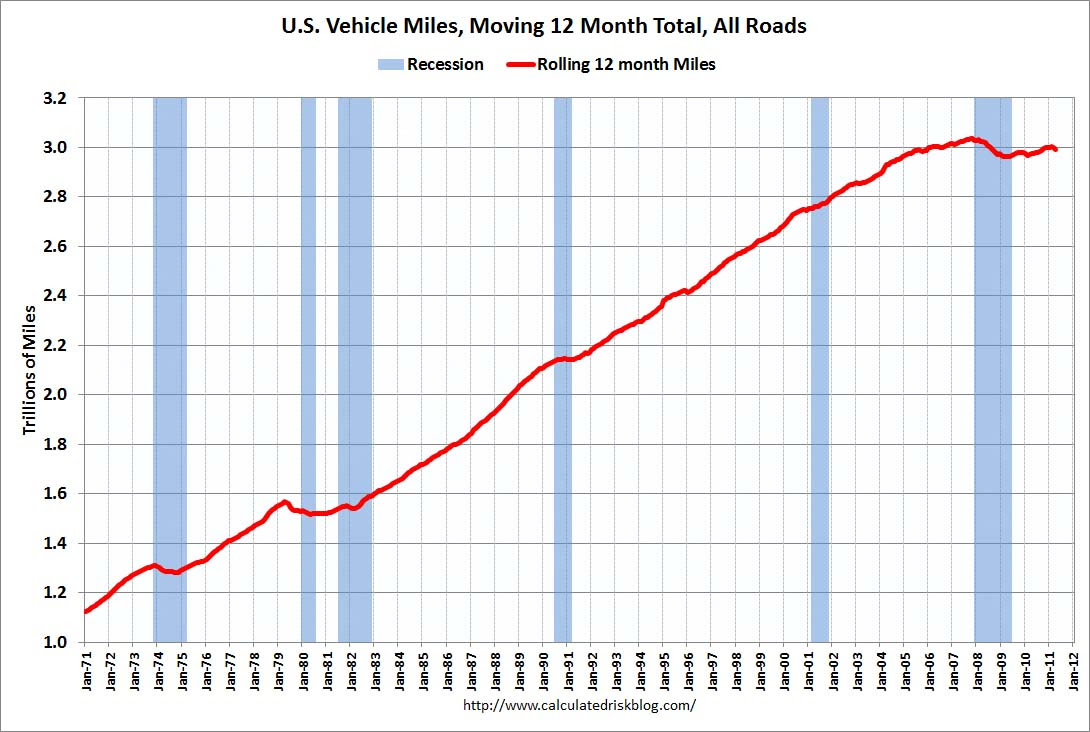 So, what made me drive 8 miles less a month, even though I had nearly three weeks of not driving to work during late December and early January? Probably good weather. I've been walking to Friday meetings at the nearest worksite, which is a mile and a half away, as well as walking to the grocery store, which is half that distance. Since I there are three to four more months of good weather left, and only one meeting remaining this academic year that I'll have to make a special drive for, with none until mid September, I might just decrease my miles driven even more. After that I expect my miles driven to increase slightly again and remain elevated until next spring. Then I plan on buying a bike. I haven't had one of those since I got divorced in 1999 and moved out of Ann Arbor. I'm looking forward to having one.

*I still have to explain the geeky pun in her name. I'll save that for another fan post.

Above crossposted to Dreamwidth and LiveJournal.
Posted by Pinku-Sensei at 12:43 AM