In James Howard Kunstler swims against the stream on gender role equality, too, I mentioned another blogger in passing.


By the way, was one of the people who objected to your protrayal of women your neighbor up on the hill, Elaine Meinel Supkis?* I know she thinks you got it wrong about dogs in the "World Made by Hand" and I agree with her.
...
* Elaine Meinel Supkis blogs on Culture of Life News. I reviewed her old blog on my LiveJournal. She is another great example of a blogger swimming against the tide who deserves her own post, and I'll have to review her new blog later this month. Yes, my plate continues to fill up.

I may as well repost that brief review.


I present to you Elaine Meinel Supkis, the weirdest financial blogger I've read who still makes any sense.

Yeah, she wears a tinfoil beanie, but in my years of following weirdos online, I've learned how to spot the ones who actually know what they're talking about and should be taken seriously. She's one of them.

One of her most endearing traits is that she uses anime characters to make her points, something that goes over most of her readers' heads, but not mine. Here she is using Risky and Safety.

Killing Corrections Can Be Fatal To Economies

Here she is using Fullmetal Alchemist.

Terrorist Threats to Goldman Sachs And Financial Threats From Within
THE END OF TIME...

And here she is using Gankutsuou: The Count of Monte Cristo.

FWIW, she's probably the person holding up the "Fail" sign in this photo. 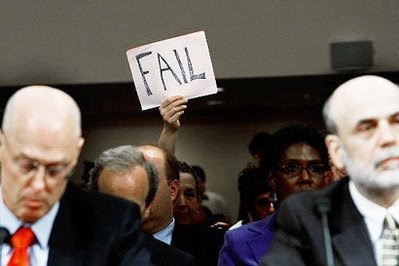 As you can see, she manages to be simultaneously amusing and terrifying while she informs her readers. What a great find!

It turned out that she wasn't the one holding up that sign, but one of the Ron Paul followers sitting near her. Darn.

However, she did draw her own Risky and Safety for that first post I linked to. Yes, a 50-something woman was drawing anime fan art to make a political and economic point. Here's the image. 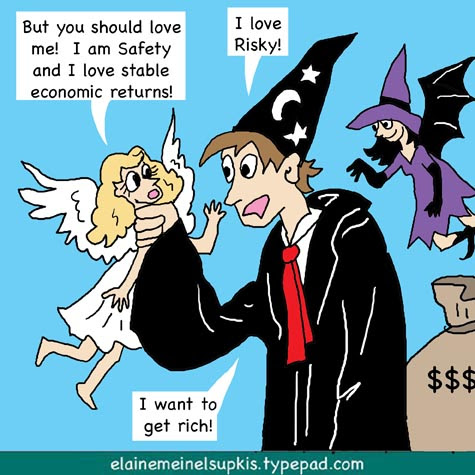 And here's the actual Risky and Safety from the anime for comparison.  Oddly enough, it's from a poster my youngest daughter and I used to possess. She got close enough so that anime fans like me could recognize the source material, yet be using her own character designs. I thought that was really cute. I still do, and I'll have to see if she continues to draw fan art and posts it at her new site.

The Livejournal entry I posted above wasn't the only time I mentioned Elaine outside of her blog. I did so in this Usenet post. The heart of that post came from the comments to the post I cited as an example of her using Gankutsuou. I mentioned to her that she should also watch Fullmetal Alchemist, as the show was "very much about what happens when people raid the Cave of Wealth and Death." I found her response both illuminating and revealing.


Full Metal Achemist starts out as a 'child's story' and ends up being this terrifying and amazing tale about time travel and the Cave of Wealth and Death, Naziism, hyper-scientist exploitation of natural forces and magic.

It is one of the most comprehensive reviews of modern magic. Far, far, far more potent and powerful than the stupid Harry Potter series.

And the anime ends literally with Eric seeking out the real-life fathers of the GERMAN rocket program with the hint that Eric will return to his alternate universe via the US space program after meeting my dad in Germany in April, 1945!!!!!

I nearly fainted at that part since the story was aimed at the idea, Eric would find someone who could time travel in the Outer Darkness....and so on. HAHAHA. He had to do this at China Lake and it involved nuclear bombs outside of Las Vegas......my childhood....

Actually, I am not invisible in Japan.

My reponse was incredulous.

These two are your parents?

It turns out they were.  Truth is stranger than fiction, as reality has no editors.

As for her telling Kunstler that he was wrong about dogs in his post-peak-oil future, she did so in her review of "A World Made by Hand." It's a long post, and she has even more to say about dogs on both her old site and her new one, so look for my commentary on those posts later.
Posted by Pinku-Sensei at 12:33 AM