This past week was the busiest so far at Crazy Eddie's Motie News, whether one measured it in terms of posts (14), page views (1577), or comments (13). This topped last week, where the comparable stats were eleven posts, 832 page views, and only five comments, itself a very good week. For comparison, this blog averaged 560 views/week during all of May and June, 486 views/week for April, May, and June, its first three full months, and 488 views/week the week before last. As I mentioned in Boosting the signal about Oak Park's "War on Veggies", I thank the readers of Oak Park Hates Veggies for making this possible, with 369 referrals last month, at least 216 of which came last week alone. This puts Julie Bass's blog in third place as the source of views for this blog throughout its history so far, behind only Kunstler's blog, where I have been promoting my blog every week since my first post here, and Google, which just happens to own Blogspot. Again, thank you, and keep reading! 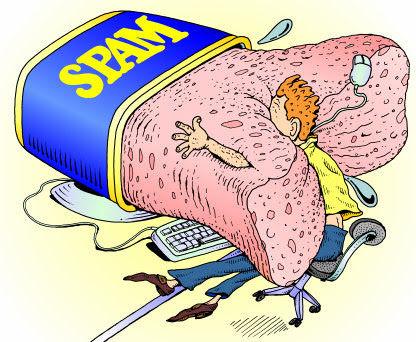 This past week also saw another milestone--my first spam comments. I know a blog hasn't arrived until it gets enough traffic to make it a worthwhile target for spammers.That's the good news. The bad news is that I should be careful what I wish for.


Honestly, I'd like more comments. I could even deal with a couple of trolls, as I'm not above trolling my own comments sections.

Trolls I don't mind, as I can hold my own against them. Spammers are another matter. From July 13th:


This blog achieved a milestone today. It received its first spam comment. However, it's not such a milestone that it was worth saving. The spam was canned.


This blog has arrived. I've gone from no spam comments to not one, but two spam comments in one week. I have advice for you. If you want to promote your blog or a relevant news story, fine. If you want to advertise for a commercial enterprise not germane to the topic of this blog (and education isn't really it), your comment will be hidden. Bye!

I don't make any money off this blog, so no one else gets to, either!

Enough of my swimming against the stream of spam--on to the week's posts in review.


Most of the past week's posts described bloggers swimming against the stream as part of this month's NaBloPoMo theme of Swim. Even last week's roundup was a Swim post, just like this week's is, even if I didn't include the badge today.

It wouldn't be a full week on Crazy Eddie's Motie News this month without a post about Kuntstler and his blog and last week was no exception, as I documented my trolling a notorious racist commenter on Clusterfuck Nation in
Impaling Vlad, or With friends like this, Kunstler hardly needs enemies. I'm sure I'll tangle with him more in the future, unless one or both of us gets banned from the blog first. I have at least three more posts about Kunstler planned for later this month, at least one of which will be this week, all of which portray how other bloggers see him. Two of them will feature commentaries by Elaine Meinel Supkis and the third will be from Nebris, both fascinating bloggers in their own right. I also plan on boosting Nebris' take on James Michael Greer the Archdruid later this month.

I got around to commenting on Paul Krugman in this blog in Paul Krugman swims against the Chicago School. I'm a big fan of his, so expect me to write more about him in the future.

It wouldn't be a week on Crazy Eddie's Motie News without sustainability linkspams, something I started the first week of this blog and last week ended up with four of them. I only planned on posting two of them, Sustainability news from Michigan's research universities for the week ending July 9, 2011 and Sustainability news from midwestern research universities for the week ending July 9, 2011, with no part three, but reality intervened. First, I started what I hope to be a new series with Silly Sustainability Saturday: Carmageddon, Tea Partiers against manatees, and Butterbeer. I already have a follow-up to the bike-plane race during Carmageddon yesterday. Spoiler--the bikes won! Then, I continued my series on the U.S.-China relationship with Focus on China in this week's CoDominion post. I expect to blog more about The CoDominion, as I already have two more articles to include in the next installment.

Finally, I had two brief miscellaneous posts, Portland is watching "The End of Suburbia" and Happy Bastille Day! As I've written before, I can't be all doom all the time!

As for last week's back catalog champion, it's Oak Park Woman plants vegetable garden; city objects, which has been the most popular post three weeks in a row. It is currently the second most read entry in the history of this blog, with 584 page views, only 55 behind the long-time leader, The New York Times reports on Troy's problems. That reminds me; it's time to examine local libraries again.

That's it for last week. I already have enough material for three complete linkspams, so watch for those later this week beginning with part one, sustainability news from Michigan's research universities, later tonight. I also have notes for at least four more Swim entries, not counting any new developments in Oak Park's war on Julie Bass's plants and animals. As I've written many times before:


I don't have to worry about finding something to write about the rest of the month. Blogging about sustainability in metro Detroit means never running out of material.