Yet another week of sustainablity news worth laughing at.

Nation's Climatologists Exhibiting Strange Behavior (Season 1: Ep 5 on IFC)
For some reason, climatologists have been running around in an agitated state, waving their little arms and squawking about "global warming."

It was only a matter of time until The Onion showed up in this series.

Do you remember Tea Party Patriots vs. manatees from the first Silly Sustainability Saturday? The Tea Party Patriots, tinfoil-lined tricorn hats and all, managed to get their local U.S. Representative to listen to them.


Florida Tea Party members believe that federal efforts to protect manatees from extinction are part of a United Nations conspiracy to place manatee over man. Freshman Rep. Rich Nugent (R-FL) is now standing up for the Tea Partiers against the feared manatee overlords, offering an amendment to the FY 2012 Interior and Environment appropriations bill (HR 2584) that would block the creation of a manatee refuge in Citrus County:

When I read "Nugent" in relation to an anti-wildlife political decision, I did a double-take. Michigan has its own Nugent who "is also noted for his conservative political views and his ardent defense of hunting and gun ownership rights."

Nugent, R-Brooksville, filed an amendment to the Department of the Interior’s appropriations that says “none of the funds” from the department’s budget may be used to implement the proposed manatee refuge rule.

Nugent said Wednesday the amendment is aimed at giving local residents and officials more time to meet with federal officials before the rule takes place.
...
“What I’m hearing is people want to be heard on it,” he said. “The federal government seems to work that way: We’ll let you have input after we design the rule. In the sense of fairness, I don’t see that as the way to do it. You have the discussions, and then make a decision.”

I'm glad he listens to his constituents, even ones as silly as the ones claiming that the manatee refuge is an expression of U.N. Programme 21. However, he doesn't have that same regard for the U.S. Fish and Wildlife Service.


He said he did not consult with federal wildlife officials before offering the no-funding amendment, other than to tell them it was coming.

“They didn’t talk to me and ask me about it,” Nugent said, referring to the manatee rule. “They wouldn’t even tell me about it until after it dropped.”

That's not all for the silly anti-sustainability amendments proposed for the Interior Department appropriations. The Democrats on the national resources committee have an entire list.

Folks, you can't make this stuff up.

Tea Party Patriots vs. Manatees was not the only rerun this week. At least one of the boobs from last week's Silly Sustainability Saturday: Boobs and Haboobs returned and he was joined by new boobs.


Think Progress captured this image from Fox News showing that they were spreading Limbaugh's conspiracy theory.


Here's the data (from NOAA) on the number of U.S. records broken or tied in the month of July so far:


Reality has a well-known liberal bias.

This week in silly sustainability wouldn't be complete without including my friend Nonnie's visual commentary on James Inholfe mocking Al Gore. 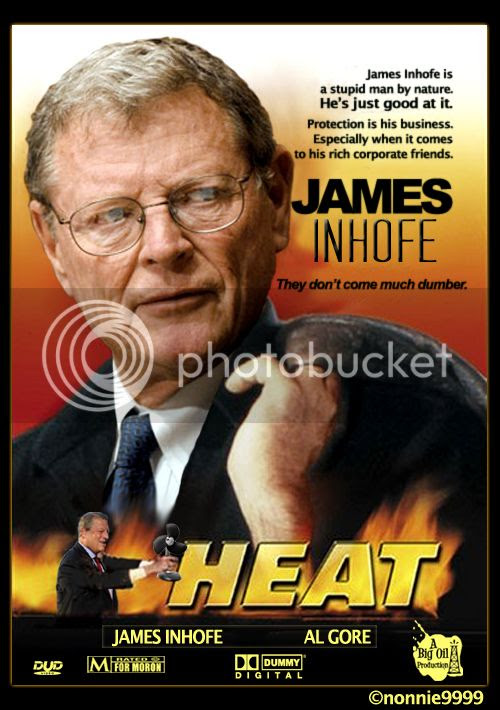 Finally, the poem I promised you. From The Bard of Murdock about Oak Park's own Julie Bass.


Your honor, may it please the court,
I’ve just received a new report
Detailing crimes of Julie Bass,
The woman who despises grass.

I’m sure your honor was informed
About the way Ms. Bass transformed
Her yard into a veggie bed,
Without the city’s go ahead.

But now, your honor, we’ve found more
Examples of her civil war
Against the city and its code;
And this time it’s the mother lode!

We’ve noticed that Ms. Bass surrounds
Herself with two unlicensed hounds,
Which she allows to freely roam
Both in her yard and in her home.

Our public safety is at stake!
If we allow Ms. Bass to break
The law without a consequence,
Anarchy will, no doubt, commence.

And having left unturned no stone
We think your honor should make known
That since the charges count as three,
Her crimes must now be called a spree.

With ‘three strikes’ laws still on the books
To deal with anarchists and crooks
Like Julie Bass, the outlaw wife,
We seek a prison term of life.

And when she’s safely locked in jail
For living well beyond the pale,
We’ll then resume our normal lives
As Oak Park men with Stepford wives.

For more of Bard of Murdock's fine work regarding July Bass, I refer you to The Oak Park Outlaw.

That's it for this week on Crazy Eddie's Motie News!
Posted by Pinku-Sensei at 8:08 PM