Cyclists, subway rider, and rollerblader all beat jet during Carmageddon

Remember me popping popcorn on Saturday?


It's not all bad news for the planet. As USA Today also reported, a bicycle club decided to challenge Jet Blue to a race.

Slate reported that the race went even better for the planet than I expected.

It was a bad day for intra-metropolitan area commercial aviation. Jet Blue flight No. 405—the flight that was supposed to help Angelenos beat the chaos resulting from the closure of the 405 freeway—was bested not only by the @wolfpackhustle A team (elite cyclists who had pledged to follow traffic rules), but by @garyridesbikes, a late entrant promising to take only public transit and walk, and, if Twitter is to be believed, a Rollerblader, @jennix, who supposedly came in third. The gripping tale of the race to the Long Beach lighthouse is there for all to see on Twitter at #flightvsbikes.

According to Twitter-based calculations by @bcgp, the unofficial finish times were:

Lost cabdriver? A late Tweet by the Jet Blue flyers, @ohaijoe and @ezrahorne, elaborated: "Our cabdriver didn't know what a lighthouse was, and was too blind to see the map on my phone."

A more competent cabbie might have let the plane passenger beat the rollerblader, but wouldn't have made any difference against the cyclists, who got the attention in the story I quoted, or the subway rider, who didn't rate a mention in either the USA Today article I quoted or the previous article on Slate about the race. To be fair, the story described the transit rider as a late entrant, but even so, it's a great coup for public mass transit, as Slate pointed out.


But the race today wasn't only about the cyclists. Gary Kavanaugh, who had reacted enthusiastically to my initial daydreaming about a "Tour de Carmageddon," was the day's dark horse, revealing the secret efficacy—and perhaps, for some remote Twitter spectators, the existence—of Los Angeles' oft-derided subway system.

I can take a little pride in this accomplishment from a great distance. My last job in southern California was as an inspector for paleontological and archeological resources in the first leg of the subway, a provision of the federal money used for the subject. I went down in all of the station exacavations between Union Station and MacArthur Park for two years ending in August 1989. Consequently, when anyone mentions L.A.'s subway, I can say that I helped build it.

Slate had one more thing to say about the subway.


(When I thought of a cyclist racing a jet, I admittedly wasn't even aware one could take mass transit between BUR and LGB).

Strictly speaking, one can't. Look at the map below and you'll see that, while there are stops near LAX and in Long Beach, there is no stop in Burbank. On the other hand, there is a stop in North Hollywood, which ended up being critical to the transit rider's second place finish. 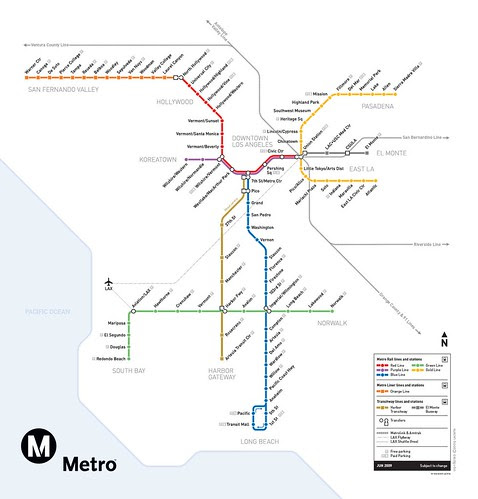 Note where the earlier article on Slate described the starting point of the race.


Cyclists will depart from a residence near the intersection of Cahuenga and Chandler Blvd. in North Hollywood at 10:55 AM PT (Saturday, July 16) Flight Departs 12:20pm and we're basing the cyclists' departure time on the airline's recommended passenger arrival time of 1.50 hours before departure.

I looked up the distance on Google Maps from the starting point to the North Hollywood station and it's just under a mile, easy walking distance. What about the finish line?

Google Maps shows that's only half a mile from the Long Beach Transit Mall, even easier walking distance. Anyone who knew the transit system would take one look at the start and finish of this route and realize what a sucker's bet this would be. Everyone else would be surprised by their impressive finish, but they certainly wouldn't be!

The flip side of all the above would be that a slightly different route would not have favored public transportation, but I'm not going to look that gift horse in the mouth any more. Besides, I'm planning on using this for a lecture on how to make cities more sustainable, the powerpoint for which already has the map above.

As for the upshot of air vs. rail, Slate pointed out the obvious to people who study the issue.


And just as "carmageddon" itself revealed the perceived monocultural dependence on automobility in Los Angeles—an entire city rendered immobile by a freeway closure!—Jet Blue's brilliant stunt revealed the glaring inefficiencies of shorter-distance air travel, one already being revealed in places like Spain, where the Madrid-to-Barcelona air routes have been gutted by the success of the country's high-speed rail.

I didn't think I find a connection between Carmageddon and Tea Partiers against manatees, but I did. Barry Commoner was right; everything is connected to everything else!

As for Carmageddon itself, it was a bust.

Daniel Faigin, who blogs on LiveJournal as cahwyguy, pointed out in advance that he didn't think it would be as bad as advertised.


Daniel Faigin, a computer security specialist and amateur historian of California freeways, says that's what happened in 1984, when drivers avoided the West Side when it hosted the Summer Olympics. "It's going to be bad, but it's not going to be as bad as they say it's going to be," Faigin says.

Sure enough, he was right.


What if you scheduled the end of the world, but nobody came? You would be in Los Angeles this weekend.

Seriously, for the past three months newspapers and politicians have been warning us about "carmageddon": the gridlock that would kill the city when I-405 with its 500,000 cars/day is closed down for 53 hours. They've been predicting backups to San Diego. It has made the news in Canada and Taiwan. Airlines have offered flights from Burbank to Long Beach.

Well, we're quite a few hours into the closure, and guess what. No real abnormal traffic so far.

Worse yet, it ended early.


A key Los Angeles freeway closed for construction work reopened some 18 hours ahead of schedule on Sunday, bringing an early end to a much-hyped "Carmageddon" traffic crisis that never materialized, officials said.

Daniel Faigin thinks this might actually be a bad result.


But you know what I'm worried about?

Yup. They are going to do this all again next year. If the traffic doesn't materialize this year, it's going to be really bad next year, because no one will believe the predictions.

Well, that's next year. In the meantime, I'll take the lead of Slate.


I'll leave the last word to the victors, the @wolfpackhustle, whose cryptic, communiqué-style email told me: "The ride was beautiful and scenic, our race inspired people to rollerskate, to take trains, to walk to the finish. Meanwhile our politicians and police cowered and bit their nails, telling people to stay home and avoid this sunny California weekend."

Here's to the cyclists, subway rider, rollerblader, and blogger Daniel Faigin, all of whom succeeded in swimming against the stream this past weekend.
Posted by Pinku-Sensei at 1:27 AM