I had the following idea last Saturday.


I've collected a handful of really goofy stories with sustainability and food angles this week that deserve their own post instead of being buried in part three of a sustainability news linkspam, so I'm introducing what might become a regular feature here. Besides, I like the alliteration of the title.

After a week of generally downbeat sustainability stories with few upbeat ones, I decided to keep this going. We all could use a laugh, especially at the expense of the enemies of sustainability.

For starters, here's a humorous take on a pair of climate change denying governors, Rick Perry of Texas and Mary Fallin of Oklahoma praying for rain, courtesy of Nonnie 9999 at Hysterical Raisins. 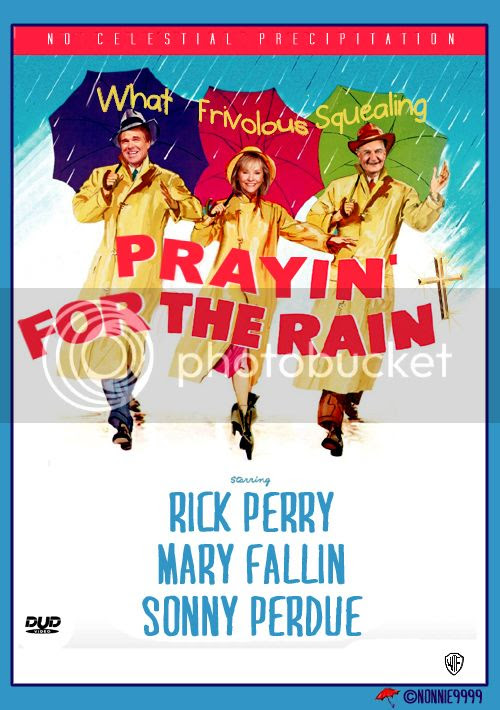 To the tune of Who’ll Stop the Rain, written by John Fogerty, as performed by Creedence Clearwater Revival:


A natural disaster, drives a lot of folks insane,
They drop to their knees faster, yeah, that old trick again,
The rainman down in Georgia, ex-Governor Perdue,
In aught 7, he looked to heaven, not one drop of dew.

Down in Oklahoma, the land is mighty dry,
You don’t need a diploma, to try and figure why,
It hasn’t rained in ages, at least last time I checked,
So Mary’s sayin’, please start prayin’, let’s genuflect.

Meanwhile, down in Texas, the drought is everywhere,
So the governor is prayin’, (when not grooming his hair,)
It’s a good thing Little Ricky, has a hotline to the Lord,
Don’t knuckle under, pray for thunder, rain’s our reward.

G-d may be telling Rick Perry to run for president but He is not setting him straight on climate change.

Speaking of G-d, here is the latest from someone who doesn't claim that G-d speaks to him, but does advertises himself as having "talent on loan from G-d," courtesy of Think Progress.


Limbaugh: The Killer 116° Heat Index Is ‘Manufactured By The Government’

They’re playing games with us on this heat wave, again. Even Drudge. Drudge getting sucked in here. Going to be 116 in Washington. No, it’s not. It’s gonna be like 100, maybe 99. A heat index, manufactured by the government to tell you what it feels like when you add the humidity in there.

“We have this every year,” Rush claimed, after arguing that former vice president Al Gore could cancel the heat wave by scheduling a “global warming conference.”

I'll tell Rush the same thing I told Edna Mattos; loosen up the Reynolds Wrap, it's on too tight.

A troll in the comments section to the Think Progress article accidentally told the truth when he wrote, "It's not the heat, it's the stupidity." He thought he was describing the environmentalists, but instead he described Rush. Projection, anyone?


Heat wave? What heat wave? That's just the government TELLING you it's hot outside, for its own nefarious reasons.

You know the (evocative but false) parable about the frog and the boiling water? Rush is the frog standing in the pan, slowly dissolving into soup, wearing a lumberjack hat and yelling "BOY IT SURE IS COLD IN HERE."

Leave it to a professional to really do a number on Rush.

Now to someone who has been portraying himself to climate change deniers and others as something he really isn't. From The Guardian.


The House of Lords has taken the unprecedented step of publishing a "cease and desist" letter on its website demanding that Lord Christopher Monckton, a prominent climate sceptic and the UK Independence party's head of research, should stop claiming to be a member of the upper house.

The move follows a testy interview given by Monckton to an Australian radio station earlier this month in which he repeated his long-stated belief that he is a member of the House of Lords. When asked by ABC Sydney's Adam Spencer if he was a member, he said: "Yes, but without the right to sit or vote … [The Lords] have not yet repealed by act of parliament the letters patent creating the peerage and until they do I am a member of the house, as my passport records. It says I am the Right Honourable Viscount Monckton of Brenchley. So get used to it."

The letter, sent by David Beamish, clerk of the parliaments, to Monckton last Friday and now published on the Lords' website, states: "You are not and have never been a member of the House of Lords. Your assertion that you are a member, but without the right to sit or vote, is a contradiction in terms. No one denies that you are, by virtue of your letters patent, a peer. That is an entirely separate issue to membership of the House. This is borne out by the recent judgement in Baron Mereworth v Ministry of Justice (Crown Office)."


Monckton is currently on a lecture tour of Australia discussing climate change. The tour has been dogged by venue cancellations after he referred to the Australian government's former climate advisor Prof Ross Garnaut as a fascist during a recent lecture in Los Angeles. Footage of the lecture also showed Monckton displaying a swastika next to one of Garnaut's quotes. Monckton later apologised for "having made the point I was trying to make in such a catastrophically stupid and offensive way".

On the other hand, I wonder if he's ever heard of "Young Frankenstein." 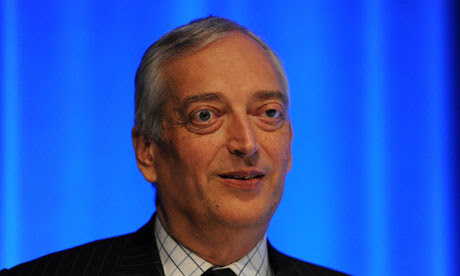 Finally, I never thought I'd see Islamophobia bleed into climate change denial, even though a lot of the same people suffer from both, but this week proved me wrong. From Think Progress.

The dictionary defines a “haboob” as a thick dust storm that blows in deserts. Arizonans, however, define a “haboob” as a jihadist harbringer of Muslim infiltration. Hearing local weathermen call Arizona’s recent massive dust storms by a term they’ve used “for decades,” one Arizona resident said, “I am insulted that local TV news crews are now calling this kind of storm a haboob. [...] How do they think our soldiers feel coming back to Arizona and hearing some Middle Eastern term.” If this is suddenly the guiding principle on acceptable vocabulary, Arizonans should eye words like algebra, pajamas, khaki, coffee, giraffe, lemon, orange, mattress, zero, and alcohol with suspicion.

Boobs and haboobs, indeed. As someone who lives in the part of the U.S. with the highest concentration of Arab-Americans, I have a long rant about how silly this all is. I'll save that for later. Instead, I'll show you all what a haboob looks like.

Towering over skyscrapers, a 50-mile wide wall of dust sweeps over Phoenix,
Arizona at speeds of 70mph.

And that's it for this week on Crazy Eddie's Motie News.
Posted by Pinku-Sensei at 6:27 PM