Three days ago, I observed and predicted:


I still haven't put another 1000 miles on my car since my last update. That was in September. Look for the next one within a week.

Right now, Yuki the Kia* has 210,999 miles on her odometer, so she'll log 211,000 miles within minutes of my pulling her out of the driveway tomorrow (today when you read this post). Since I know exactly what's going to happen, I may as well go ahead and write the post about it.

My previous update was on September 27, 2011. That was 129 days ago. 1000/129=7.75 miles/day. Expressed as miles/month using 30.5 days/month, it's 236.4 miles/month. That's ridiculously low, and not an average I expect to get again until I start cycling to work two days a week during the summer. What contributed to it were two events I knew about in September, but forgot to account for when I wrote the previous post, along with something that came as an unpleasant surprise.

The known events were my trips to Mexico and New Jersey. I didn't drive at all during the trip to Mexico, not even to the airport (I was lucky enough to get a ride). I did drive some in New Jersey, but that was in my wife's car, which I don't monitor for mileage the way I do my own.

The unexpected event was my shifter cable sticking, which put my car out of commission for a week and a half. I also drove my wife's car then. I made up for one of those missing weeks by driving into work the week before classes started, which I normally wouldn't have done, but I'm still down three weeks of no driving when I'd normally only be down one.

All the same, I'm still doing my part to reduce the number of miles driven by Americans, as shown by the following graph from Calculated Risk. 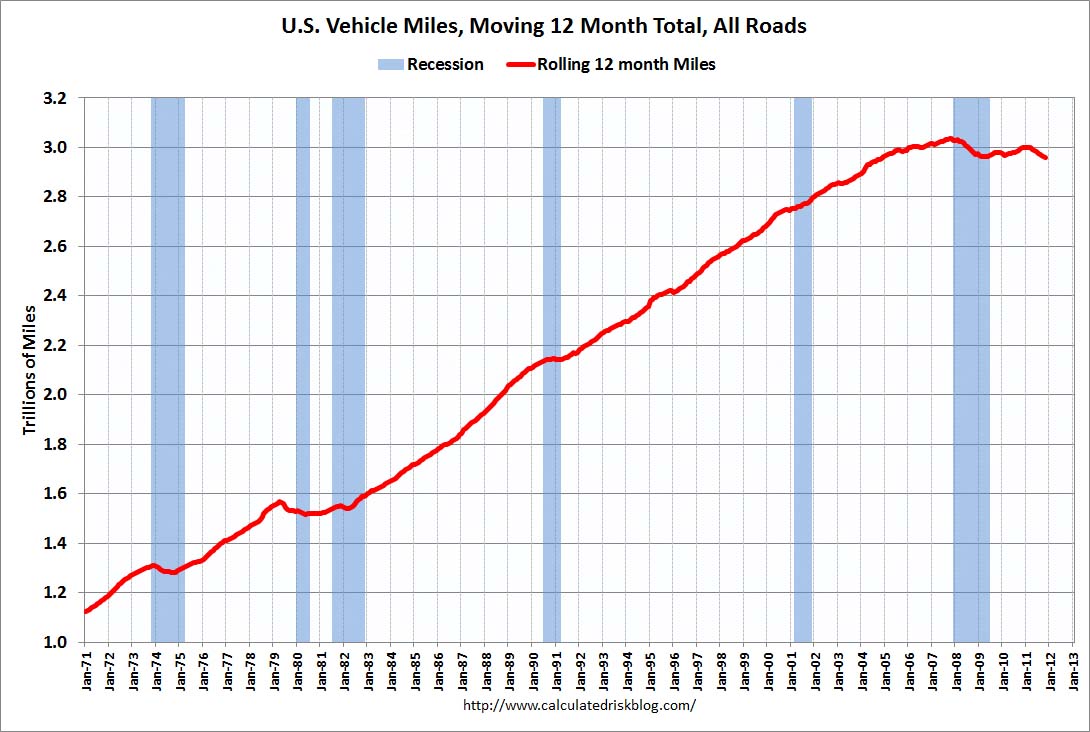 Folks, that's four years of driving less than the previous peak in December 2007. That's a record, one that will continue to be extended for at least a year. Peak Driving, anyone?

*I still have to explain that name. Some other time.
Posted by Pinku-Sensei at 12:01 AM