This has been a very busy week here in Michigan, and especially in Metro Detroit. In addition to the recall of Troy Mayor Janice Daniels, the agreement to build a new Detroit-Windsor bridge, and rising local gas prices, all of which I've blogged about, the following sustainability-related stories all made the news this week:


The big story this week from Michigan, the one that sucked all the oxygen out of the room as it went viral on social media and the national and international press, was the silencing of State Representatives Lisa Brown and Barb Byrum in the Michigan State House, ostensibly for saying "vagina" and "vasectomy" respectively. Join me over the jump for a sampling of the reaction so far, along with an overview of what was being debated when the incident happened.

In the spirit of a picture being worth 1000 words, here is a graphic describing the bills being debated when Brown and Byrum said "vagina" and "vasectomy."

These bills were passed, which means that if the State Senate passes them and Governor Snyder signs them into law, Michigan will have the most restrictive laws on abortion in the country. Of course, Planned Parenthood of Michigan and most of the Democratic members of the state legislature objected vehemently. That's where the story really begins, as the Detroit Free Press reports in With video: Two female Michigan lawmakers silenced after vagina, abortion comments. Here's the video, so you can see for yourself.


As you can see, Barb Byrum was trying to get recognized to speak on behalf of her own amendment. She never got a chance to do so and her amendment was never allowed to come to a roll-call vote. I'd be as frustrated as Representative Byrum if that happened to me, especially if there had been a year-long pattern of such behavior. At least Representative Brown got a chance to speak.

Susan J. Demas of M-Live managed to scoop the Free Press on this story, pointing out its electoral significance in Michigan GOP tries to lose the suburbs with abortion bills.


The Republican Party poobahs in the land of soccer moms and Chevy Suburbans decided, for some reason, that having an all-white guy slate for county offices, from county executive (L. Brooks Patterson) to county clerk (Bill Bullard), was a grand idea.

And now House Republicans, desperate to satiate the ever-hungry Right to Life machine -- which burps out litmus tests like clockwork around endorsement time -- could finish the job.

The goal, as always, is to win their August GOP primaries by proving just how right-wing and right-to-life they are. But general election voters in November -- especially in Oakland County, which is decided by female independents -- don't share those priorities.

Not only could these draconian laws and the brouhaha over Brown and Byrum's words hurt the GOP, they could benefit Lisa Brown directly, as she is running for Oakland County Clerk. A wave of motivated voters could sweep her into office in November.

The Lansing State Journal gave Barb Byrum her moment in the spotlight with Byrum: 'vasectomy' comment led to ban from Michigan House floor. The GOP leaderships denied that it was the "vasectomy" remark that caused her censure.


But a spokesman for House Speaker Jase Bolger, R-Marshall, said it wasn’t that simple.

Byrum was “gaveled down,” according to Bolger spokesman Ari Adler, “for marching through the chamber and shouting like a small child throwing a temper tantrum.”

"A temper tantrum"--I don't know if that's any better.

Of course, the state's progressive blogs have been over this controversy like white on rice, beginning with Michigan Liberal, where Eric B. posted Teh Demas on the GOP's war on women and updated it to include the suspensions of Brown and Byrum. Blogging for Michigan followed suit with Democratic women banned from speaking on the House floor as did Eclectablog in http://eclectablog.com/2012/06/michigan-house-republicans-are-afraid-of-vaginas-and-vasectomies-whats-next-elbows.html. The story started to go national with As Punishment For Opposing Anti-Abortion Bill, Male Michigan House Leader Bans Two Female Reps From Speaking in Think Progress and Brainwrap's diary of the ever changing subject line on Daily Kos. That's when it caught fire.

The next day, I saw all the following images all over my Facebook feed. 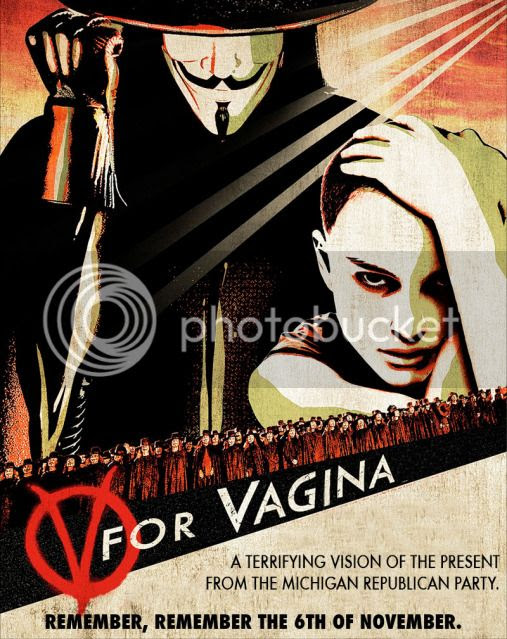 Thanks to Brainwrap on Daily Kos. 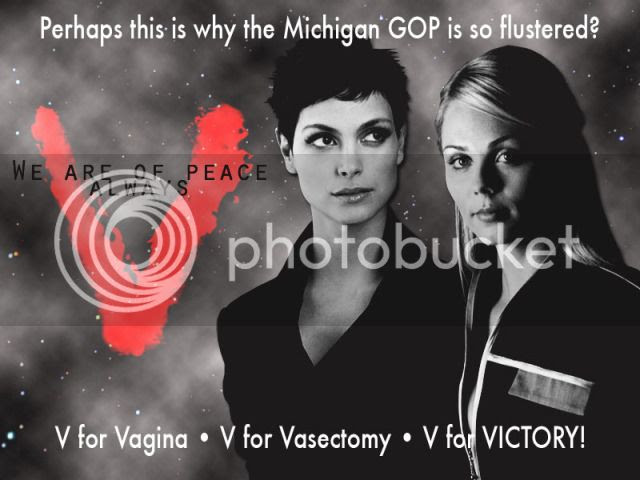 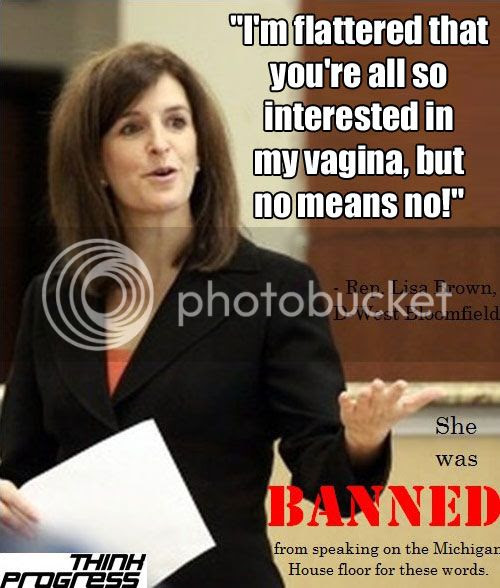 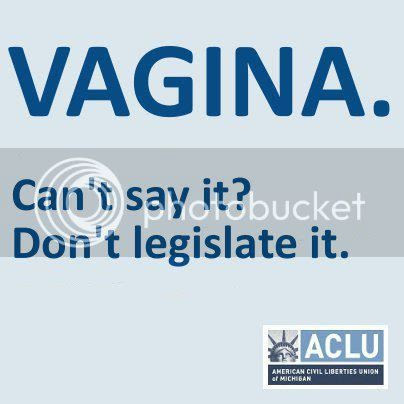 That was just Facebook. What about the mainstream media outlets the covered the story?

NPR: Michigan State Rep Barred From Speaking After 'Vagina' Comments
The Detroit News: Lawmaker barred from speaking after 'vagina' comment
The Nation: Vagina, Vagina, Vagina
Think Progress: Michigan GOP Spokesman: Female Reps Threw ‘Temper Tantrums’ Over Abortion Bill
And then there were all the Detroit Free Press articles I linked to in the introduction. However, I have to link and quote one more, the opinion piece by Rochelle Riley, who called the action an attack on women and democracy.


But here's what really happened in the Michigan Legislature this week: Democracy was shut down. And women's voices were silenced. If our state's other legislators, our voters and our patriots allow it, then we deserve what we get.

This is America. You can't tell women they can't speak because you don't like what they say.
...
Brown and Byrum were doing their jobs. Jim Stamas was killing democracy.

Progress Michigan was just as blunt: Speak Only If You Agree With The Boys. Remember what I wrote two months ago? Michigan is now Ignoreland.

If the idea was to silence Lisa Brown inside the State House chamber, the action had the exact opposite effect outside the State Capitol, as outlet after outlet wanted to her her story.

The Detroit News, no liberal rag, gave her an opportunity to give her perspective in Rep. Lisa Brown: Silenced on the House floor for using correct body terms. The Guardian allowed her to tell her story from the other side of the Atlantic in My vagina monologue: what Michigan GOP lawmakers didn't want to know, where she wrote, "If Michigan Republicans think they have the right to control women's bodies and reproductive rights, they can hear me out." And, of course, she got on TV. Here she is on WXYZ in State Rep. Lisa Brown speaks with 7 Action News.


For a summary and partial transcript of the video, surf over to State Rep. Brown tells 7 Action News "vagina" remark was not meant to shock on WXYZ's website.

Brown also starred in a segment on the Rachel Maddow Show.

Visit msnbc.com for breaking news, world news, and news about the economy

Can you say backfire?

Speaking of backfiring, this entire incident has inspired people to investigate all the prior examples of sexism by Republicans in the Michigan Legislature, beginning with Electablog noting The GOPocrisy of Michigan Republicans – calling women c–ts and whores is okay, mentioning vaginas gets them censured. That got the attention of Jeff Wattrick over at Wonkette.


Members of the Michigan legislature are expected to behave in a manner that is becoming, not only of the dignity and responsibility of their high office, but of the people they represent.

That’s why the Honorable Frank Foster, member of the Michigan House of Representatives, did the only gentlemanly thing possible when Michigan Nurses Association staffer Julia Smith-Heck wouldn’t stop mowing her lawn while Foster was a guest in Smith-Heck’s neighborhood last month: he called her a cunt. As a matter of fact, Foster shouted “you’re a cunt” from across the street.

The fun and games aren't over yet. On Monday, there will be a performance of "Vagina Monologues" on the State Capitol steps starring nine female Michigan legislators. Never will the expression "political theater" be meant so literally. Crossposted to Michigan Liberal.
Posted by Pinku-Sensei at 7:21 PM