I'm posting the space and astronomy news early this week, as there is a lot of it and at least one story, the Chinese space mission, is updating rapidly and constantly. So, without any further ado, here are the stories from last night's Overnight News Digest: Science Saturday (Turing at 100 edition) on Daily Kos, along with additional material and updates.

Science at NASA on YouTube: ScienceCasts: Voyager 1 at the Final Frontier

At the edge of the solar system, Voyager 1 is reporting a sharp increase in cosmic rays that could herald the spacecraft's long-awaited entry into interstellar space.

This video has subtitles, but there is a complete transcript at Kowch737's copy. Also, the Denver Science Examiner has an article and slideshow up.


Humanity is about to send its first ambassador beyond the solar system.

No, it’s not a person and, no, there are no planned appointments with any alien representatives. Instead, after more than 30 years of flight, two machines are about to enter interstellar space.

Launched in 1977, Voyager 1 has reached a region of space where the intensity of sub-atomic particles that are electrically charged has significantly increased. Scientists believe this indicates the probe is about to pass through the heliosphere.

DarkSyde on Daily Kos has more on this story, along with other space and science news, in This week in science: Hello from the planet earth.

The rest of this week's busy space and astronomy news, including This Week @NASA, the upcoming Mars landing, the latest on the Chinese orbital mission, and video of the landing of the X-37B, over the jump.


NASA Television on YouTube: ISS Day on the Hill on This Week @NASA

There is more on NEEMO after the section on Mars.

NASA Television on YouTube: Challenges of Getting to Mars: Curiosity's Seven Minutes of Terror

Team members share the challenges of Curiosity's final minutes to landing on the surface of Mars.

Space.com via LiveScience: Parts of Mars Interior as Wet as Earth's
June 22, 2012


The interior of Mars holds vast reservoirs of water, with some spots apparently as wet as Earth's innards, scientists say.

The finding upends previous studies, which had estimated that the Red Planet's internal water stores were scanty at best — something of a surprise, given that liquid water apparently flowed on the Martian surface long ago.

"It’s been puzzling why previous estimates for the planet’s interior have been so dry," co-author Erik Hauri, of the Carnegie Institution of Washington, said in a statement. "This new research makes sense and suggests that volcanoes may have been the primary vehicle for getting water to the surface."

Every red dot on the globe is a single crater larger than 1 km in diameter. This work comes from a published paper by Robbins and Hynek in the Journal of Geophysical Research that came out in 2012. (There is no audio to the video.)


It’s no secret that Mars is a beaten and battered planet -- astronomers have been peering for centuries at the violent impact craters created by cosmic buckshot pounding its surface over billions of years. But just how beat up is it?

Really beat up, according to a University of Colorado Boulder research team that recently finished counting, outlining and cataloging a staggering 635,000 impact craters on Mars that are roughly a kilometer or more in diameter.

As the largest single database ever compiled of impacts on a planet or moon in our solar system, the new information will be of help in dating the ages of particular regions of Mars, said CU-Boulder postdoctoral researcher Stuart Robbins, who led the effort. The new crater atlas also should help researchers better understand the history of water volcanism on Mars through time, as well as the planet’s potential for past habitability by primitive life, he said.

Getting to Know Your Solar System (16): Asteroids (Vol. 2)
by Troubadour

Now, here is the "more on NEEMO" I promised.


Mars scientist Steve Squyres is again learning to walk in space by diving into the sea as a NASA aquanaut.

Squyres, Goldwin Smith Professor of Astronomy and lead scientist for the NASA Rover mission to Mars, is one of four NASA scientists making up the crew of the 16th NASA Extreme Environment Mission Operations (aptly shortened NEEMO), a two-week undersea training mission located in the Florida Keys National Marine Sanctuary in Key Largo.

Starting June 11, NEEMO aquanauts will spend close to two weeks living at the Aquarius Undersea Laboratory Base, at a depth of 63 feet, with the goal of testing techniques and protocols for human exploration of near-Earth asteroids.

Space.com via LiveScience reported the end of this mission in 'Aquanauts' Complete Mock Asteroid Mission on Ocean Floor.

Asteroid 2012 LZ1 sailed within 3.3 million miles (5.3 million kilometers) of Earth at its closest approach on June 14. Since that distance is roughly 14 times the distance between Earth and the moon, the oblong-shaped asteroid 2012 LZ1 never posed a threat of colliding with our planet.

But the flyby did allow astronomers to train the planetary radar system at the Arecibo Observatory, a huge radio telescope in Puerto Rico, on asteroid 2012 LZ1 and find that its size was seriously underestimated.

Moving in from near-Earth asteroids comes the latest news about water ice on the Moon.

Jun 22, 2012; 5:00 AM ET NASA's Lunar Reconnaissance Orbiter has returned data suggesting there is ice in the Moon's craters.

The Chinese have been busy in space this past week.  ITN (UK) on YouTube reports.

Astronauts on board China's Tiangong-1 space-lab have begun up to 20 days of experiments. Report by Sam Datta-Paulin.

ITN has another update in Tiangong-1 and Shenzhou-9 complete difficult manual docking.

China has made history by manually docking a spacecraft in orbit, joining the US and Russia in accomplishing the feat. Report by Sam Datta-Paulin.

The US military's secret X-37B 'mini shuttle' lands in California after 15 months in orbit. Report by Sam Datta-Paulin.

The next item gives me hope, as it describes training the next generation of people who will keep us in space.


Utah State University engineering students have done it again, capturing first-place honors for the fourth time in five years. Not a bad record, especially considering that the highly competitive competition is hosted by NASA.

On April 22 USU’s Chimaera Rocket Team bested more than 500 students, representing 41 colleges and universities in 28 states, when the team launched its rocket and payload at Bragg Farms in Toney, Ala. This year’s victory marks the fourth first place entry by USU in the previous five years. The USU-built rocket was also recognized by the NASA peer review panel as the best overall vehicle design, an award given to the most creative, innovative and safety-conscious rocket design.

Now, an item that is about life in the U.S., but which wouldn't be possible without space technology, including GPS and satellite imaging.


Just as the GoPro camera and YouTube have enabled us regular viewers to see things from a perspective we've never seen before, aerial photography, satellite imagery, number-crunching computers and GPS trackers can help us understand data flows too complicated to easily imagine.

The fantastic PBS miniseries America Revealed, which "explores the hidden patterns and rhythms that make America work," makes stunning use of data-viz techniques to stimulate the eye-candy part of your brain while teaching you something.

Here is the video clip that accompanies this article, showing the infrastructure necessary to make our industrial food systme possible.

AMERICA REVEALED takes viewers on a journey high above the American landscape to reveal the country as never seen before. Join host Yul Kwon (Winner of "Survivor: Cook Islands") to learn how this machine feeds nearly 300 million Americans every day. Discover engineering marvels created by putting nature to work, and consider the toll our insatiable appetites take on our health and environment. Embark with Kwon on a trip that begins with a pizza delivery route in New York City, then goes across the country to California's Central Valley, where nearly 50 percent of America's fruits, nuts and vegetables are grown, and into the heartland for an aerial look at our farmlands. Meet the men and women who keep us fed - everyone from industrial to urban farmers, crop-dusting pilots to long-distance bee truckers, modern-day cowboys to the pizza deliveryman.

Finally, an astronomical event that is celebrated as a holiday. 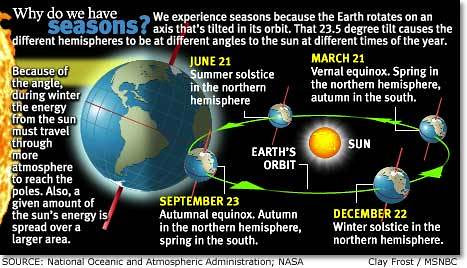 
Welcome, summer! The season officially begins Wednesday, the longest day of the year in the Northern Hemisphere.

The summer solstice of 2012 will occur at 7:09 p.m. EDT, the instant when the sun climbs to its farthest point north of the equator. For those in the Southern Hemisphere, this solstice is the astronomical marker for the beginning of winter.

Though the actual length of the 24-hour day doesn't change, daylight will last a fraction of a second longer on June 20 than on June 19 or 21. From here on out, the days will get just a bit shorter each day until the winter solstice in December.

For how Detroit celebrated the solstice, see Happy Solstice from Detroit!
Posted by Pinku-Sensei at 5:37 PM