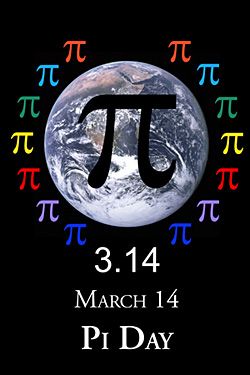 
Today, 4,000 years after people first discovered how useful pi could be, we are about to celebrate International Pi Day. The first time a day was dedicated to pi was on March 14, 1989 at the Exploratorium, a museum of science, art and human perception in San Francisco. The idea was the brainchild of Larry Shaw, a physicist at the center...

Since then, this museum and many others, as well as universities, schools and individuals have celebrated Pi Day by performing pi-related activities; some serious and some less so, such as creating pi puns; baking, throwing and eating pies; and singing pi songs. You can check out this year's bash at the Exploratorium here.

At first, Pi Day was a gimmick and a good joke, but now it is a big deal. Many North American and UK schools use it to spark interest in maths and science projects (for example, learning how the Greeks or Arabs did arithmetic; studying famous scientists like Gauss, Newton or Archimedes who worked on pi; or perhaps calculating the volumes of real pies before eating them).

Don't expect a lot of serious posts for the next week. Tomorrow is the Ides of March. Two days after that is St. Patrick's Day. Finally, a week from today is this blog's first birthday. Party time!
Posted by Pinku-Sensei at 10:07 AM