I know I promised a retrospective post yesterday. Don't worry, I'm working on it and will post it tonight or tomorrow.

I've decided to make this a multi-part post spread over the rest of the month. Today's installment features an overview of the statistics and the first part of a series reflecting upon the most popular posts from the past twelve months.

During the first year of the blog, March 21, 2011 through March 20, 2012, I made 483 posts, readers posted 204 comments, and the blog received 47,808 page views. That means I averaged 40.25 posts per month. Considering that I was starting to complain of burnout by the end of last May and decided not to use Crazy Eddie's Motie News as my official blog for NaBloPoMo during June, I'm pleasantly surprised that I managed to have that much consistency and endurance in my blogging. Here's to keeping that up this coming year.

The readers also did their part, helping the blog average 3984 page views per month and 99 views per post. I'm pleased with those stats as a baseline to build on for the coming year, especially since the blog has had more than 4,000 page views per month for seven months running, including the current one that has another week to go. About the only averages I find disappointing were those involving comments, with 0.42 comments per post, 17 comments per month, and 0.0043 comments per page view. However, it's not surprising. As I've mentioned before, if I want comments, I'll cross-post my entries to LiveJournal, JournalFen, or Daily Kos. Blogspot is great for readership, but it really doesn't have the sense of community the other blogging platforms have.

In first place, with 615 page views and 4 comments is The New York Times reports on Troy's problems from May 20, 2011. It figures with all the posting I've done about the city of Troy, Michigan, that one of them would be the top post. However, I don't consider this to be my best post about the subject (either Troy Mayor Janice Daniels shows how to be vulnerable to a scandal or "Save the Library, save Troy" would be), just the best marketed and promoted. Here's what I wrote over at Kunstler's blog.


I'm surprised you didn't write about The Rapture as a non-event the news media would rather report on than our real problems. I did, as I thought a blog about the collapse of civilization would be remiss if it didn't have something to say about the supposed beginning of the end of the world. I guess you didn't agree. However, we might agree on the following:


No supernatural causes will be needed to bring about the collapse of civilization; the interaction of human behavior with limited resources can do that all by themselves. That end will be completely natural, not supernatural.

As for managing contraction, the New York Times reported on the Detroit suburb of Troy facing that issue. I blogged about it on Crazy Eddie's Motie News, where I have a link to the original article. It's a sign that contraction is hitting even the most well-off areas.

That comment was just about as long as the post itself. Speaking of which, this entry was the most successful of several where promising Kunstler's readers a link to an article in the New York Times got their attention--567 pages views worth, the most of any single referring page. There are at three others on this list.

I'll continue with the second most popular of the top twelve posts tomorrow. Until then, I'll leave you with my two favorite images of signs in Troy. The first is from the library millage election, and counts as a cruel but effective political practical joke. The second proves that I can fail the Butt-Head half of the Beavis and Butt-Head test. What makes it even worse is that is the exit sign for the Hooters in Troy. Think about it. 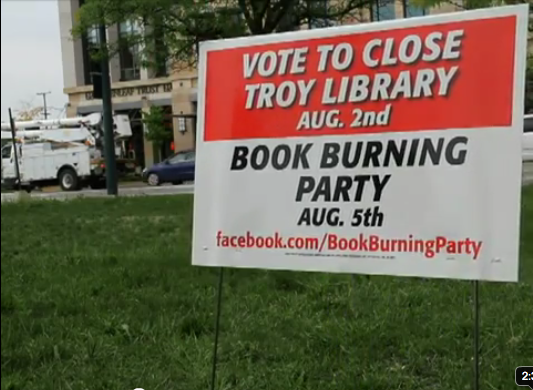