Auto sales up and that's no April Fools

Unlike last year, when I posted April 1st and it's business as usual as a sardonic April Fools joke about the economy,* this year brings good news from the perspectives of both business as usual perspective and transitioning to more sustainable future, and it involves cars. Yes, really. I'll let Mary Conway of WXYZ have the honor of going first.**


That's right, rising gas prices are actually helping auto sales. Being prepared for a price rise this time, unlike being caught flat-footed like they were in 2008, has served the auto manufacturers in good stead. Brad Plumer has the story in How Detroit saved itself over at the Washington Post.

By introducing new lineups of small and mid-size cars and by cutting costs since teetering on the brink of collapse three years ago, GM, Ford and Chrysler are slowly reclaiming market share from once-unsinkable foreign competitors such as Toyota.

In March, both Ford and Chrysler posted their best sales months in about four years. Chrysler, which filed for bankruptcy in April 2009, has recorded 24 straight months of year-over-year sales gains. GM has seen bumps for every model in its Chevrolet lineup — even the electric Volt, with sales doubling in March.

“The economic recovery and a deep bench of fuel-efficient cars and crossovers have been driving our sales for more than a year, but the combined impact has never been stronger than it was in March,” Don Johnson, vice president of GM’s U.S. sales operations, said in a statement. “Since the last time fuel prices spiked, both the economy and GM’s product portfolio are undeniably stronger.”

I'm especially glad to read that sales of the Volt increased, especially after surviving both safety concerns and political attacks. That I'm a Volt booster should come as no surprise to anyone who reads this blog.

Both Plumer and Conway spun the news very positively by focusing on the year-over-year numbers, but what about the month-over-month figures? Calculated Risk has those.

This was below the consensus forecast of 14.7 million SAAR.
...
Even though this was below expectations, growth in auto sales will make another strong positive contribution to GDP in Q1 2012.

Below expectations and lower than last month, but Bill McBride still thinks it's good news. Do the graphs support his view? Let's see. 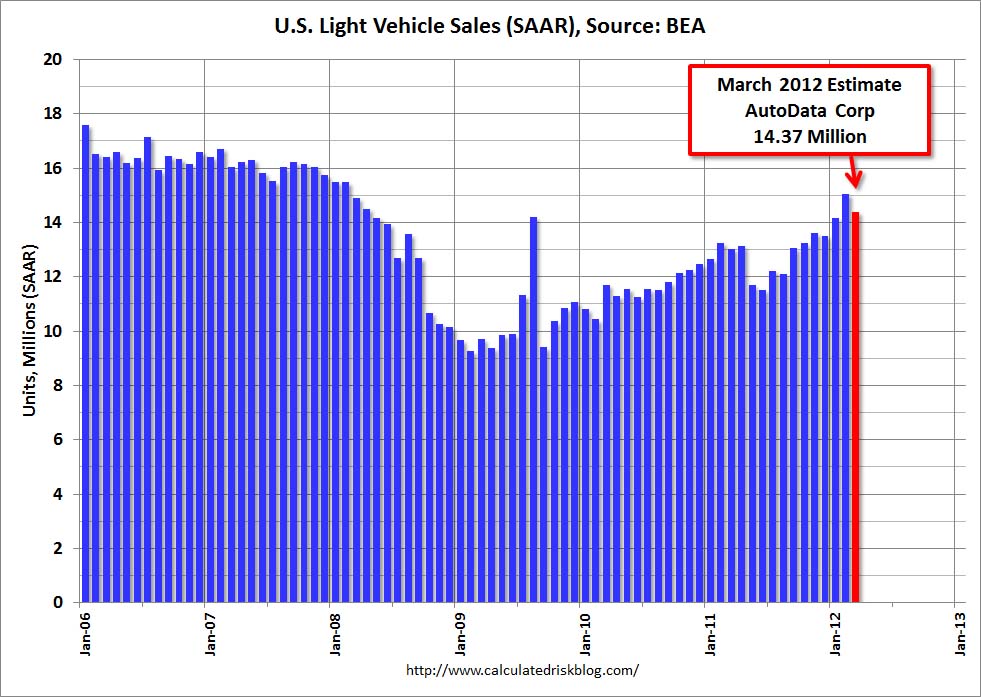 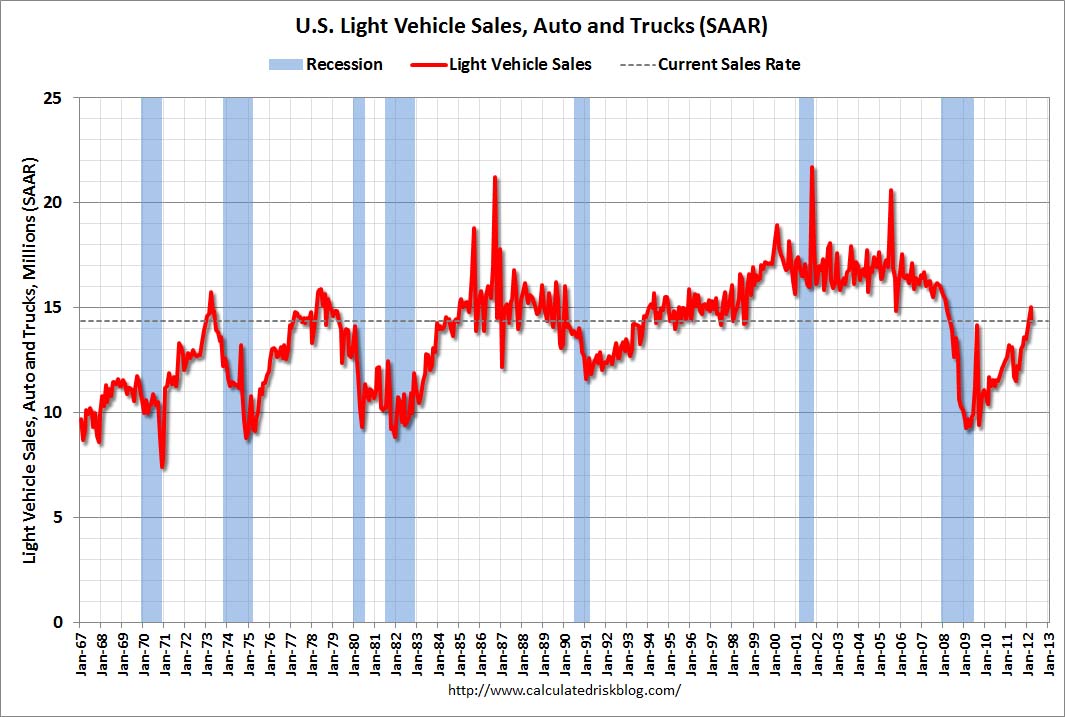 And now the song lyrics for tonight--"Let the Good Times Roll" by The Cars!

*I was right to be skeptical. As the first chart from Calculated Risk shows, car sales fell below April levels for six consecutive months, causing the Michigan unemployment rate to increase during the same time. Nationally, conditions also worstened or stagnated for those same two quarters, as the graphs over at Bonddad's blog show. I'm more optimistic this year.

**This is the most enthusiastic I've seen Mary Conway since Dream Cruise, when I made the following observation.


I've been watching Mary Conway on WXYZ for 22 years, ever since I moved here from Los Angeles. I have to say that this is the happiest and most sincerely enthusiastic I've ever seen her in all this time. It looks like she's having the time of her life covering this year's Woodward Dream Cruise.

I'm looking forward to seeing if she can keep this up all week.

She did. I must say the woman loves cars.
Posted by Pinku-Sensei at 12:50 AM