With this post, I'm going to start picking up the pace of this retrospective by reviewing at least two posts at a time. I'll be combining posts based on their commonalities, not by their page view ranks, so expect the second (and third, should I get that ambitious) post described to be "out of order." This week, I'm commenting on two posts that had immediate success on their own merits; neither marketing nor patience were required. I just happened to be lucky enough to blog about the right subject at the right time, so people found them on their own.

The first of the two was 2011 set rainfall records in Detroit, Michigan, and Ohio, I posted on December 31, 2011. This post succeeded all on its own with no help from me, ending the first full year fourth place with 363 page views and no comments.* This was the most successful of my entries about climate and weather. I began composing this entry more than a week in advance, collection links and excerpts along the way. When the story finally reached its anticipated climax (record precipitation in Detroit), I added the finishing touches to it and then set it to autopost at 8:01 AM on New Years Eve. By the time I got up around noon, it had already earned more than 50 page views before I posted its link to Google Plus, Facebook, and Twitter, without which most of my posts earn at best a handful of pageviews. Instead, Google searches for record rainfall in Detroit had driven traffic to it. Looks like I managed to hit a hot topic that people really wanted to read.

In a follow-up, I noted that it wasn't just Michigan and Ohio that had the record precipitation for the year. Localities in a swath from Arkansas to Vermont and Massachusetts set precipitation records. Nearly all of those weather stations were in areas hit by either Hurricane Irene or Tropical Storm Lee, and some were hit by both. Here's the map from that post. Green circles show the precipitation records.

The second post that succeed spectacularly because of people searching for its topic was The Wolf Moon, the first full moon of 2012, is tonight. Posted on January 8, 2012, it's the only one of the top ten from this calendar year. It was the most popular of my posts about space, science, and holidays. Like 2011 set rainfall records in Detroit, Michigan, and Ohio, it earned its 251 page views and eighth place ranking** because of people searching for a timely event, in this case the first full moon of the year. I did promote it through the usual means, but it also had more than 50 page views before I could mention it on Kunstler's blog the next day.

Here's to hoping that I write more entries that are as successful on their own as these two.

While there are more songs about rain and full moons than I could possibly count, let alone embed, there is one that I find particularly fitting for this entry. First, it's called "First Full Moon." Second, it's by Sufjan Stevens, a Detroiter who recorded the album Greetings from Michigan, the Great Lake State. Here's the cover. 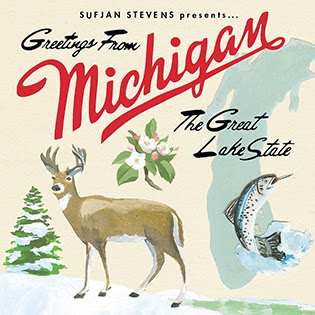 How could I possibly resist? Take it away, Mr. Stevens!

*During the past three weeks, the rank of this post has dropped from fourth to sixth as the next two posts I'll examine have risen past it. Google may have helped the post off to a fast start, but it hasn't given it endurance.

**This post has kept pace since March 21st, as it has been getting more page views (260 at last count) with every full moon of the year, remaining in eighth place.
Posted by Pinku-Sensei at 12:01 AM