Paraskevidekatriaphobia--that's one of terms for an irrational fear of Friday the 13th, the other one being friggatriskaidekaphobia.* I don't suffer from it, but I literally woke up on the wrong side of the bed today** and am in a generally crabby mood, so I'll indulge in examining this superstition, something I haven't done before on this blog, even though there have been two previous Friday the 13ths since I started blogging here.

First, this is the second Friday the 13th of the year, and it won't be the last, as MLive points out.

Today's Friday the 13th, and this year is especially freaky because of quirks in the calendar

The last time that chain of events happened was 28 years ago in 1984.

I have a macro for that.

Furthermore, three Friday the 13ths in a year is the maximum possible. Combine that stat with this being the year of the Mayan Apocalypse, and it's the perfect recipe for superstition.

So, what happened on this blog on the two previous Friday the 13ths, as well as why I called today "Apophis Day?" Click on "Read more" to find out.

The first one was last May. In it, I mentioned in passing that Blogspot had been down that day and erased all record of the the page views for the prior day's post. I don't recall a failure of Blogspot that big before or since. The second one was, as I noted above, this past January, when I posted twice. Neither of them recounts events indicating bad luck for me or the blog. However, both could be considered bad luck for Mitt Romney. The first showed how the comeback of the auto industry in general and the Big Three auto companies in particular has been viewed as such a success that politicians were flocking to the North American International Auto Show. How is that bad luck for Mitt Romney? I'll let the UAW by way of Think Progress answer that one.


The second post was the first of several that examined the fallout from When Mitt Romney Came to Town. Finding out that Bain Capital was behind the demise of KB Toys actually made me angry at Romney. That ad helped Gingrich win the South Carolina Republican Primary and temporarily derailed his position as the "Inevitable Candidate." It also highlighted how Romney's strength could be converted into a weakness. I'm sure the Obama campaign will be grateful for that meme come this fall.

As for what the future holds, I don't know what will happen or I'll post on Friday, July 13th, but I'm sure it will be bad luck for somebody. Who knows, I might unrecommend a blog. I already have a candidate in mind. However, there is an event in the more distant future that fits one of the themes of this blog, disasters with a science fiction flavor, perfectly--the first of two close approaches of the asteroid Apophis, which is predicted to happen on Friday, April 13, 2029. The second pass of the asteroid will also happen on April 13th of 2036. So, today's date, April 13th, will be day of the year when both approaches of Apophis happen. I christen it Apophis Day!

On that cheery thought, I wish you all both a lucky Friday the 13th and a Happy Apophis Day! 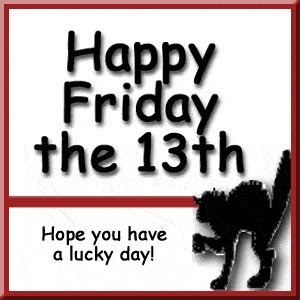 Today's song is "Take Me Away" (lyrics here) from the remake of the movie "Freaky Friday." Take it away Lindsay Lohan and Pink Slip!

*I chose paraskevidekatriaphobia over friggatriskaidekaphobia because the former is composed entirely of Greek roots, while the latter has both Norse and Greek components. That's the result of my background as a systematist (a biologist who specializes in the classification and relationships of organisms) shining through. Older ideas of properly constructed scientific nomenclature preferred having names be either all Latin (or Latinized) or Greek (or Hellenized) over being mixed. However, I know I'm on the less popular side of the argument as the term I prefer has 74,000 Google search results while the other has 92,000. I suppose it's because friggatriskaidekaphobia sounds closer to Friday the 13th to Anglophones than the term I prefer. Besides, being of mixed Latin and Greek parentage didn't stop meritocracy from being accepted.

**I awoke to an excruciating cramp in my calf and couldn't get out of bed fast to stand up and make it go away because I was sleeping against the wall. That was literally the wrong side of the bed for that condition.
Posted by Pinku-Sensei at 2:54 PM