How to convert Farmville players into real farmers, maybe

Over on my LiveJournal blog, I have a tag that I use as a catch phrase, "While the world burns, Farmville thrives." I've been wondering when I'd find a story to blog about here on Crazy Eddie's Motie News where I could use that tag. I finally found it, courtesy of one of my Twitter followers, @WhereMyHoseAt. 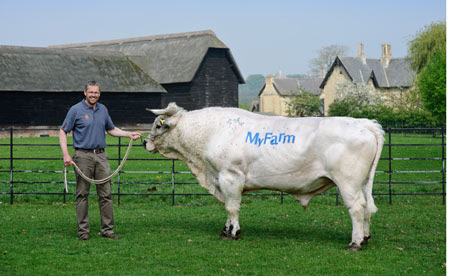 
You've played Farmville on Facebook. Now you can play farming for real.

The UK's National Trust (a charity established to preserve and protect ancient buildings and countryside landscapes) has set up My Farm, a people-powered online farming project.

What the National Trust is doing is crowd-sourcing farming and turning that project into an educational game. As for how that will work out, I'll just say that the video game experts are skeptical. From the story in The Guardian that Time picked up on.


But Nicholas Lovell, a games consultant and founder of the Gamesbrief blog, is yet to be convinced: "There is something in the idea that people like to grow, nurture and beautify things. But Farmville's success is down to the craftsmanship of hooking into basic human psychology: the need to finish things we've started, to return gifts when we're given them and many, many more.

"A Farmville for which people had to pay £30 to access would have flopped miserably. By charging for access, the National Trust is taking the success of Farmville as being about farming, when I think it was about bringing accessible, cost-effective, well-designed gaming to a new audience."

This project is also a charity fundraiser.


Arthur Potts Dawson, co-founder of the mutual business, the People's Supermarket which now has 1500 members, said: "MyFarm is brave, even mad, but the People's Supermarket was considered mad when we started. Both help prevent you blindly walking around a supermarket not knowing where your food comes from." The online farmers will need to pay a one-off £30 fee to join, which also allows them to visit the farm in person. Reynolds defended the fee. "We are a charity and there is a big upfront cost we need to cover. It feels like a reasonable cost. If we get many more [than 10,000] we could reduce the fee in the future conceivably."

In addition to getting access to the real life farm should they ever choose to visit, the virtual farmers will get a vote in how the farm is run. That should be interesting to follow.
As for how what appeal this might have to Farmville players, Time has an answer.


But if you feel you've got as much fun as you can from Farmville, perhaps this is the logical next step. Either that, or buy your own actual farm. This option is somewhat cheaper.

Maybe this will work. In the meantime, while the world burns, Farmville thrives.
Posted by Pinku-Sensei at 11:11 PM