In Pepper spray as a vegetable product: fat-free or fact-free?, I quoted David Frum in New York Magazine. Not only was he quoted by Paul Krugman at the New York Times, but also by Karoli at Crooks and Liars. Here's the quote again.


Extremism and conflict make for bad politics but great TV. Over the past two decades, conservatism has evolved from a political philosophy into a market segment. An industry has grown up to serve that segment—and its stars have become the true thought leaders of the conservative world. The business model of the conservative media is built on two elements: provoking the audience into a fever of indignation (to keep them watching) and fomenting mistrust of all other information sources (so that they never change the channel). As a commercial proposition, this model has worked brilliantly in the Obama era. As journalism, not so much. As a tool of political mobilization, it backfires, by inciting followers to the point at which they force leaders into confrontations where everybody loses, like the summertime showdown over the debt ceiling.

But the thought leaders on talk radio and Fox do more than shape opinion. Backed by their own wing of the book-publishing industry and supported by think tanks that increasingly function as public-relations agencies, conservatives have built a whole alternative knowledge system, with its own facts, its own history, its own laws of economics. Outside this alternative reality, the United States is a country dominated by a strong Christian religiosity. Within it, Christians are a persecuted minority. Outside the system, President Obama—whatever his policy ­errors—is a figure of imposing intellect and dignity. Within the system, he’s a pitiful nothing, unable to speak without a teleprompter, an affirmative-action ­phony doomed to inevitable defeat. Outside the system, social scientists worry that the U.S. is hardening into one of the most rigid class societies in the Western world, in which the children of the poor have less chance of escape than in France, Germany, or even England. Inside the system, the U.S. remains (to borrow the words of Senator Marco Rubio) “the only place in the world where it doesn’t matter who your parents were or where you came from.”

We used to say “You’re entitled to your own opinion, but not to your own facts.” Now we are all entitled to our own facts, and conservative media use this right to immerse their audience in a total environment of pseudo-facts and pretend information.

Right after I posted the above, I read Fox News Viewers Know Less Than People Who Don't Watch Any News: Study in the Huffington Post. I'd quote it, but both HuffPo and a commenter on Karoli's article linked to the original study, which is a press release and therefore can be quoted at much more length. Here are the highlights of "Some News Leaves People Knowing Less" from Farleigh-Dickinson University in New Jersey.


According to the latest results from Fairleigh Dickinson University’s PublicMind Poll, some news sources make us less likely to know what’s going on in the world. In the most recent study, the poll asked New Jerseyans about current events at home and abroad, and from what sources – if any – they get their information. The conclusion: Sunday morning news shows do the most to help people learn about current events, while some outlets, especially Fox News, lead people to be even less informed than those who say they don’t watch any news at all.
...
But the real finding is that the results depend on what media sources people turn to for their news. For example, people who watch Fox News, the most popular of the 24-hour cable news networks, are 18-points less likely to know that Egyptians overthrew their government than those who watch no news at all (after controlling for other news sources, partisanship, education and other demographic factors). Fox News watchers are also 6-points less likely to know that Syrians have not yet overthrown their government than those who watch no news.

"Because of the controls for partisanship, we know these results are not just driven by Republicans or other groups being more likely to watch Fox News," said Dan Cassino, a professor of political science at Fairleigh Dickinson and an analyst for the PublicMind Poll. "Rather, the results show us that there is something about watching Fox News that leads people to do worse on these questions than those who don’t watch any news at all."

That's bad, but it gets worse. Fox News can't even inform people about news that they should be good at.


Only 55% of New Jerseyans are able to name correctly either Mitt Romney or Herman Cain as the Republican candidates most recently leading in the polls, with 37 % saying that Romney is ahead, and 18% saying that Cain is. Watching Fox News didn't help or hurt respondents on this question. MSNBC, however, helped: Watching MSNBC was associated with a 10-point increase in identifying Romney as the leader, and a 5-point drop in the likelihood of identifying Cain compared to those who got no exposure to news at all.

"Given the amount of time and effort the media spent covering these candidates, the fact that only about half of the public can name one of the front-runners is embarrassing," said Cassino. "The fact that Fox News, the preferred media outlet for many of the candidates, doesn't do better in informing viewers is very surprising." 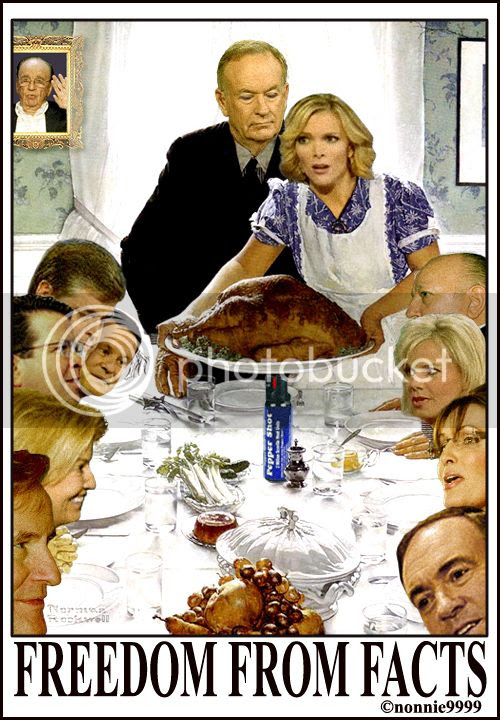 Original at Hysterical Raisins.
Posted by Pinku-Sensei at 1:07 PM