In honor of Black Friday, I am reposting my favorite article I wrote as Detroit Science News Examiner from 2009 in its entirety.  It is just as timely today as it was when I first posted it on Christmas Eve two years ago.  In addition to being my favorite from that year, this article was the first one of mine to be ranked as the most popular on the Detroit Edition of Examiner.com, something I was so proud of that I took a screenshot of it. 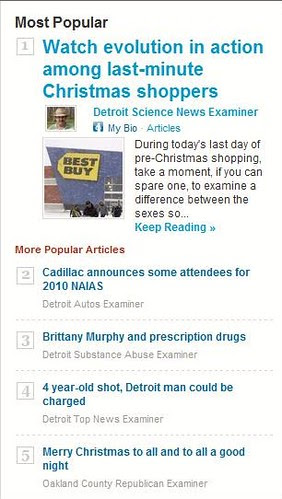 And now, the article.

During today's last day of pre-Christmas shopping, take a moment, if you can spare one, to examine a difference between the sexes so stereotypical that it has become a cliche--the contrasting ways that women and men shop. Women usually go shopping in groups, bring their children along, and browse through store after store, taking their time comparing the items on sale. Men, who also according to the stereotype probably will compose the majority of the eleventh-hour shoppers frantically dashing around you, treat shopping like a search-and-destroy mission; they'll home in on the target (or Target, if that's where they're shopping), quickly make the purchase, and get out, crossing it off the gift list on their way to their next destination.

University of Michigan evolutionary psychologist Daniel Kruger has an explanation for this disparity. In "Evolved foraging psychology underlies sex differences in shopping experiences and behaviors" (PDF), a paper he co-wrote with recent University of Michigan gradate and research assistant Dreyson Byker, which is scheduled to be published in the December issue of the Journal of Social, Evolutionary, & Cultural Psychology, Kruger suggests the differences are the result of hundreds of millenia of humans being hunter-gatherers, when women generally gathered plants and fungi while men generally hunted game.

A mere few thousand years of being settled farmers, let alone less than two hundred years of being consumers in an industrialized society, have not changed how humans forage for the things they need. Instead, people have adapted and extended long-standing behaviors and tendencies for novel situations, such as shopping malls and big box stores. As quoted in a press release from the University of Michigan, Kruger said, "We have evidence that the kind of skills, abilities and behaviors that are important for hunting and gathering in current foraging societies emerge predictably in our modern consumer environment."

Kruger was inspired to perform this research while on a winter holiday trip with friends in Europe. After spending some time exploring sleepy little villages in the Czech Republic, the vacationers reached the tourist mecca of Prague. The women in the party promptly wanted to go shopping, which the men found baffling. They wanted to see the major cultural landmarks of the city instead. As reported in a story on ABC's website, the party settled the conflict by splitting up; the women went shopping while the men went sight-seeing, although the men didn't have much choice.

"We thought, 'Why do you want to go shopping? You can go shopping anywhere. There's a thousand years of culture here,'" he said. "They were adamant. They put their foots down. They took the credit cards and left," Kruger said to Discovery News.

According to both ABC and Discovery News, when the women returned from their shopping trip, they couldn't wait to show off the results of their expedition. "When they came back with all the purchases, it was almost like a conquest, an expedition. They wanted to show us all the wonderful things they had found," Kruger said to ABC.

At that moment, Kruger realized he was on to something important about sex differences in behavior and decided to find out what it was. He hypothesized that the women engaged in a modern version of gathering, while the men had gone hunting. That hypothesis explained a great deal to him, even before he collected data. While the women's insistence on going shopping immediately upon entering Prague stumped him and the other men in his vacationing group at the time, "[It was] not so unreasonable if you're thinking about a gathering strategy," Kruger said in the University of Michigan press release. "Anytime you come into a new area you want to scope out the landscape and find out where the food patches are."

They found out that gathering was traditionally performed mostly by women, who gathered on a daily basis and returned to the same locations over and over again looking for the ripest, highest quality fruits and vegetables. The gatherers gained from spending a lot of time browsing and returning, as they would be able to harvest food when it ripened on another trip. Since "Gathering is much more conducive to socialization than is stalking game," and "Keeping quiet is much less important when stalking vegetables," as the Kruger and Byker wrote in the paper, socialization was important as part of gathering. The researchers also determined that child care was relatively easy during gathering, especially when contrasted to hunting.

On the other hand, hunting was traditionally performed by men, who hunted over large distances and might not return to the same location for weeks at a time. It didn't pay the men to be choosey; just kill the biggest available animal and bring it directly home. The prey might run away if one dithered before the kill or spoil if one delayed afterwards. While socialization might be an important part of the hunt after the kill, during stalking, one had to remain silent. A noise might scare the prey away. As for child care, that was out of the question. Even women who hunted in traditional societies didn't bring their children with them.

Kruger and Byker further tested the hypothesis by surveying 467 students at two major midwestern universities about seven categories of behavior--long-distance navigation using compass directions, short-distance navigation using landmarks, gathering skills and behaviors, hunting skills and behaviors, shopping as recreation, shopping as socialization, and new areas as shopping opportunities. The different navigation strategies had been long known among evolutionary psychologists as being associated either with men (using compass directions) or women (landmarks) and hypothesized as resulting from hunting by men and gathering by women.

What the two researchers found supported Kruger's hypothesis. Women used more navigation by landmarks and gathering skills and behaviors during shopping than men, while men used more navigation by compass directions and hunting skills and behaviors than women, although women turned out to be quite competent at using compass directions; they just didn't prefer them as much as men. As the researchers wrote in their paper, "there is evidence that women's role as gatherers continues to exist even though the environment and objects being gathered have changed with respect to the ancestral environment," while "even though the prey is now an expensive home theater system, men are still applying the skills that were developed to obtain meat in a hunter-gatherer environment." Furthermore, according to the study, "most shopping activities have a greater similarity to women's traditional activities of foraging and gathering than to men's traditional activity of gathering...shopping has significantly more in common with gathering than it does with hunting."

So, those of you rushing around doing last-minute Christmas shopping, take a look around, and realize that, according to Kruger and Byker, most of the women around you are looking for the ripest, highest quality and best value items, while the men are there to make the kill and get out.
Posted by Pinku-Sensei at 11:16 AM