Ayn Rand on love and sex

There is one part of Atlas Chugged I find worth revisiting.


15.Rand's descriptions of love making are truly screwed up; vicious acts of near-sadism. Reardon essentially masturbates using Dagny's body as a tissue and she likes it. Even when Dagny experiences the perfect physical bliss of sex with John Galt (and yes, that's in there too), it's pretty creepy.

Every time you throw up a little during a sex scene, drink. Or at least rinse your mouth out.

TV Tropes has noticed this. Under Author Appeal, there is this little gem.


Ayn Rand had a thing for The Red Sonja and "bodice-ripper" style ravishment sex, which her sex scenes usually involved. The rather violent sex scenes she wrote (especially the rather infamous Howard Roark/Dominique Francon sex scene in The Fountainhead) can plausibly be read as Rape Is Love, although this is debated by many (including anarchist-feminist Wendy McElroy).


Ayn Rand is well known for this trope, as it falls in line with her personal fetishes. Rand liked strong, take-charge men and bodice-ripping, ravishment-type sex. Her works are sometimes accused of containing Rape Is Love, though it is a debatable matter.


There's more under Rape Is Love, but in the spirit of a picture being worth 1000 words, I'll post the following instead. 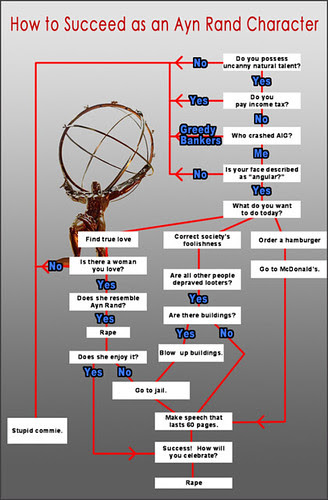