This is why yesterday was Buy Nothing Day for me

My Facebook status yesterday was "As far as I'm concerned, today is Buy Nothing Day." It was the most popular status update I can ever remember posting, with 21 likes and three additional people commenting. Based on how American shoppers behaved, I'm glad I didn't venture off my property to buy anything yesterday!

Black Friday sales turned into a shopping frenzy in the US. 20 people were left injured after a woman sprayed pepper spray in a bid to get a bargain. Report by Melanie Hill.

ITN wasn't the only British news source that reported yesterday's appalling behavior. BBC chimed in with US Black Friday marred by shootings, pepper-sprayings, which is currently the most popular news item of the week for North America on the site. In addition to the incidents described in the ITN video above, BBC listed the following.
PolitcusUSA weighed in on the Black Friday mayhem with two articles: Not Even Pepper Spray Can Stop The Walking Dead Of Wal-Mart Black Friday and Wal-Mart Black Friday Shoppers Prove Themselves More Dangerous Than OWS. In the latter piece, Sarah Jones connects the dots between yesterday's violence and police mistreatment of Occupy Movement protesters.


Obviously, there’s a difference between police using pepper spray against dangerous elements in a crowd and a citizen using it to gain the upper hand at a Black Friday Sale, but just where do they think she got the idea?

Just like the constant drum beat for “second amendment remedies” by conservatives in the press leaks into the subconscious of the unstable, so too do the constant stories of police using pepper spray on citizens leak into the national consciousness.

And let’s not forget that too many times, police have used pepper spray on Occupy protesters who were not dangerous, were sitting still, were already kettled, and/or were not escalating violence.

Customers using pepper spray on other customers, robberies, and shootings are not things that have been seen at Occupy Wall Street protests. Republicans told us that it was patriotic to shop after 9/11, and these same people have demonized OWS, but what we have seen is that the corporate giants like Walmart and the shoppers who get whipped into a frenzy by their charms are more dangerous than Occupy Wall Street.
...
Thanks, Occupy Police. You just ratcheted up the level of general insanity another notch.

Speaking of the juxtaposition of the Occupy Movement and Black Friday, what did they do yesterday? Huffington Post has the story.

It's an Associated Press story, which means I don't quote it on general principles, but it does describe how the Occupiers in San Francisco and Sacramento told shoppers to not shop yesterday, especially at the large corporate-owned chain store, but instead shop at the locally owned stores today (Saturday).*


More Occupy activism can be expected on the day following Thanksgiving. The Detroit chapter of Occupy the Hood, a wing of the Occupy Movement focused on people of color, is calling for a boycott on Black Friday, the biggest retal sales day of the year that traditionally launches the Christmas shopping season.

"Black Friday is one of the busiest, biggest days for corporations," said Ife Johari Uhuru, a founder of Occupy the Hood who lives in Detroit.

Occupy the Hood's request to refrain from shopping joins a long tradition of post-Thanksgiving activism. Adbusters, the magazine that originally called for the Occupy Wall Street protests, has been organizing Black Friday boycotts and pranks for 20 years. They are celebrating this year's anniversary of the effort, which they call "Buy Nothing Day," with a new campaign called "Occupy Christmas."
...
Occupy Detroit also plans to support the Black Friday boycott.

"We are coordinating with Occupy the Hood. We will be working together to carry out [actions on Friday]," Teed said. "We want a lot of people at multiple shopping venues to hear our message."

Teed echoed Uhuru's focus on education, saying that Occupiers hope to contrast predicted sales figures with statistics about Detroit's debt and wages of Walmart executives with those of employees.

She hopes the call to boycott will inspire people to stay at home, or to spend their money with local businesses.

"Hopefully with more energy and involvement around Occupy, we can build that into a bigger thing next year," Teed said.

I did something in solidarity with Occupy Detroit, and I didn't even have to leave the house!

As for what else I think of Black Friday, may a picture truly be worth 1000 words. 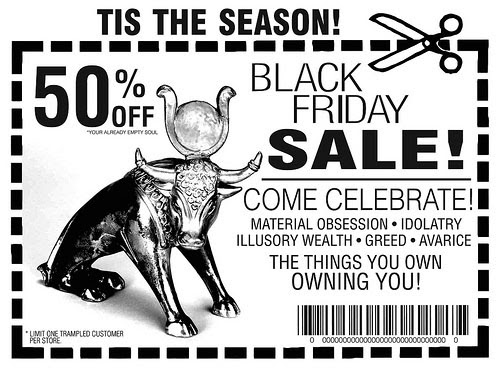 *Small Business Saturday should be the subject of the next post.
Posted by Pinku-Sensei at 6:53 PM