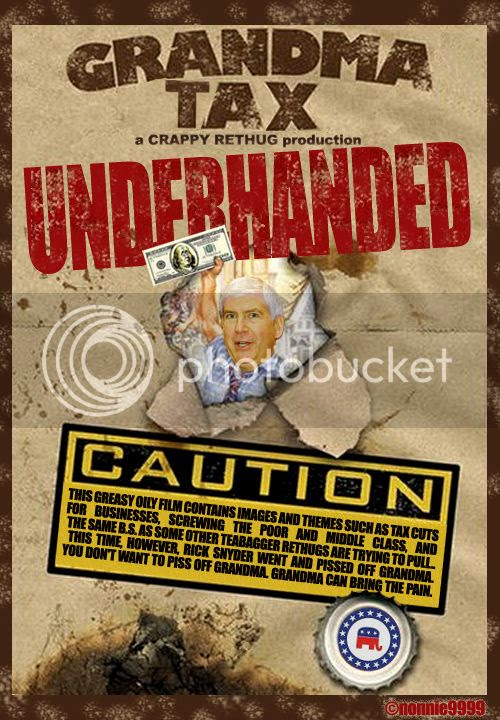 That's right, Michigan Governor Rick Snyder got sued twice this week and the suits were filed on successive days, Wednesday and Thursday. Both suits allege that legislation Snyder signed violated the constitutions of both Michigan and the United States.

The Oakland Press has the report on the suit filed Wednesday.

Democrat follows through on lawsuit against new county commission law


A lawsuit was filed Wednesday against Gov. Rick Snyder for signing a controversial redistricting bill into law during the holidays that affects only Oakland County.
...
The legislation Snyder signed reduces the number of county commissioners from 25 to 21 in Oakland County, the only county that has more than 21, and allows the county commission to draw new district boundaries in advance of this year's election in November.

At issue is Article IV, Section 29 of the Michigan Constitution.

None of the actions in the bolded section occurred. If nothing else, this act has not be placed before the voters of Oakland County.

The suit not only alleges that the law violates the state constitution, it also violates state law and the U.S. Constitution, as it fails to:

Also, it's not like there isn't a perfectly good redistricting plan around. A panel consisting of three county elected officials and the heads of the county's Democratic and Republican parties devised one that survived a court challenge by the local Republican Party. This plan is an attempt to prevent its implementation and preserve the power of the local Republican Party on the County Commission. As Oakland County Democratic Party Chair Frank Houston said.


“Gov. Snyder knew that the Oakland County power grab legislation he signed into law was unconstitutional, in conflict with several other state laws and nothing more than a political favor for Brooks Patterson and Oakland County Republicans. This is why redistricting laws and court decisions shouldn't be changed through back room conversations by Republican Party leaders without public input or review.”

For Thursday's suit, I'll let the Detroit Free Press have its turn.


The ACLU of Michigan sued the state and Gov. Rick Snyder in federal court today to try to overturn a state law that prohibits certain public employers from providing health insurance and other benefits to same-sex domestic partners.

“This law was designed with one purpose in mind and that was to strip away health insurance coverage from same-sex couples,” ACLU Legal Director Michael Steinberg said at a news conference in Detroit after the suit was filed.

He called the law “cruel and shameful” and said Snyder signed it Dec. 22 despite his stated goals of attracting the best and brightest workers to Michigan.

There was no immediate comment from the governor’s office.

The law will strip away domestic partner benefits from all local government and school district employees, whether they are in same-sex or opposite-sex unions. The same-sex couples at least have the option of getting married to preserve their benefits. The same-sex couples don't. Proponents of the law have made clear that it is targeted against same-sex couples because it "is consistent with a 2004 constitutional amendment voters approved defining marriage as a union between a man and a woman."

The impact of the law could be even greater than described above, as the American Family Association of Michigan also thinks it should apply to state civil servants and to state university employees and wants the Attorney General to make a ruling about its scope. If it does, there will be even more trouble. The state universities have their own governing boards and thus have autonomy to set their own benefits. The same is true for state employees, who are governed by the Civil Service Commission. The universities, at least, are protected by the state constitution, but as we saw with the first suit, that didn't impede the Republicans in the state legislature one bit.

While Snyder didn't write these laws, he could have saved himself the suits by vetoing the bills and sending them back to the legislature. Instead, he signed both of them. Now he has the beginnings of not one, but two, big legal fights on his hands that will cost the state more money than the measures would save. Good going, Nerd.
Posted by Pinku-Sensei at 3:48 AM