Detroit, Michigan, and the auto industry in the State of the Union


[C]an we think of a recent example in the United States where helping to preserve an industrial cluster was an important policy consideration? Indeed we can: the auto bailout. A key argument for the bailout was that if the major US firms were allowed to go bankrupt, a whole industrial ecology would be lost with them. And the auto bailout has been a huge success, not least because it did preserve that ecology.

Aren’t you glad that Obama didn’t listen to the other party on this issue?

Right on cue, immediately after President Obama listed his administration's foreign policy achievements, he pointed out the success of the auto company bailout in his State of the Union speech.


On the day I took office, our auto industry was on the verge of collapse. Some even said we should let it die. With a million jobs at stake, I refused to let that happen. In exchange for help, we demanded responsibility. We got workers and automakers to settle their differences. We got the industry to retool and restructure. Today, General Motors is back on top as the world's number one automaker. Chrysler has grown faster in the U.S. than any major car company. Ford is investing billions in U.S. plants and factories. And together, the entire industry added nearly 160,000 jobs.

What's happening in Detroit can happen in other industries.

In the same post in which Krugman praised Obama for bailing out the auto companies in the name of preserving the industrial ecology supporting auto manufacturing in the U.S., he posted this graph of the Michigan's unemployment rate.

That's quite a recovery, although it was interrupted by the short-lived slump that accompanied the rise in oil prices during the first half of the year. In fact, the following graph from Calculated Risk displaying the unemployment rates of all 50 states plus the District of Columbia shows that it was the best recovery of all 51 reporting. 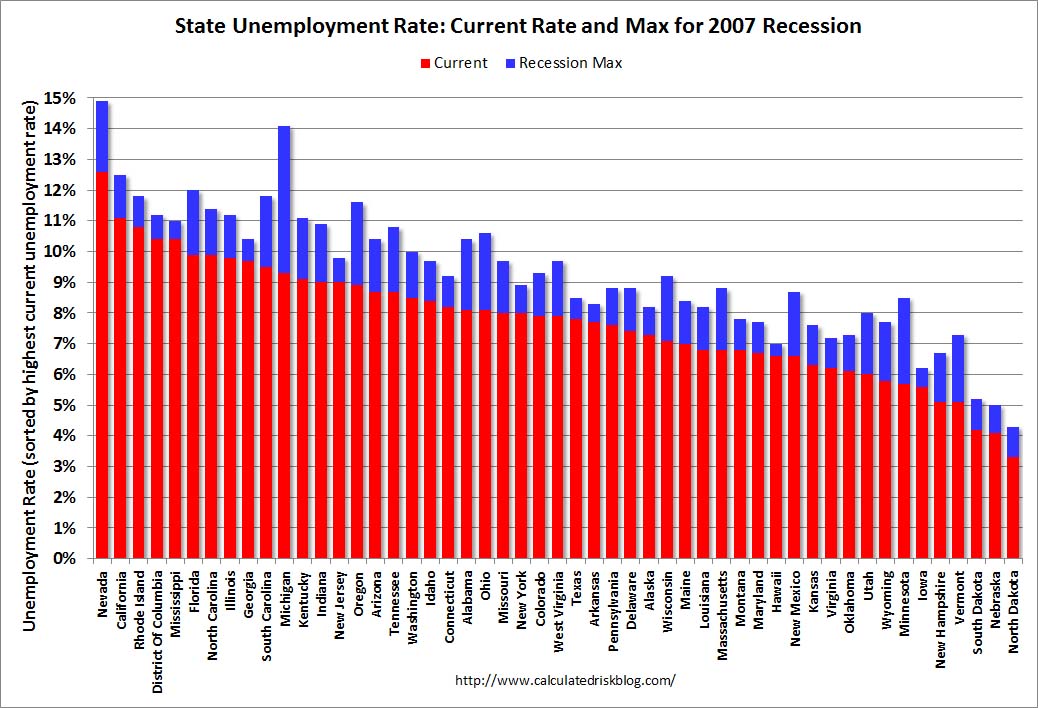 Unemployment has fallen nearly 5% since Fall 2009, when Michigan had the highest unemployment rate in the Union. Now, Michigan is below 10% after three years of double-digit unemployment and is out of the ten worst states at 11th. Both Krugman and Bill McBride of Calculated Risk are showing that what happened in Detroit (actually all of Michigan) is indeed worth emulating. Isn't that a pleasant surprise?
Posted by Pinku-Sensei at 7:23 AM