The local news about cars will be dominated for the next two weeks by the North American International Auto Show, which begins today with the Press Preview, but other things worth paying attention to happened this past week. To view and hear them before they get buried in all the auto show coverage, click "Read more."

This was at the consensus forecast of 13.6 million SAAR.
...
The annualized sales rate was essentially unchanged from November, and the last two months were the strongest since June 2008 excluding cash-for-clunkers.
...
Growth in auto sales should make a strong positive contribution to Q4 GDP. Sales in Q3 averaged 12.45 million SAAR, and sales averaged 13.46 million SAAR in Q4, an increase of 8.1% over Q3.

In the spirit of a picture being worth 1000 words, here are the appropriate graphs from Calculated Risk. First, the monthly bar graph of sales for the past six years. 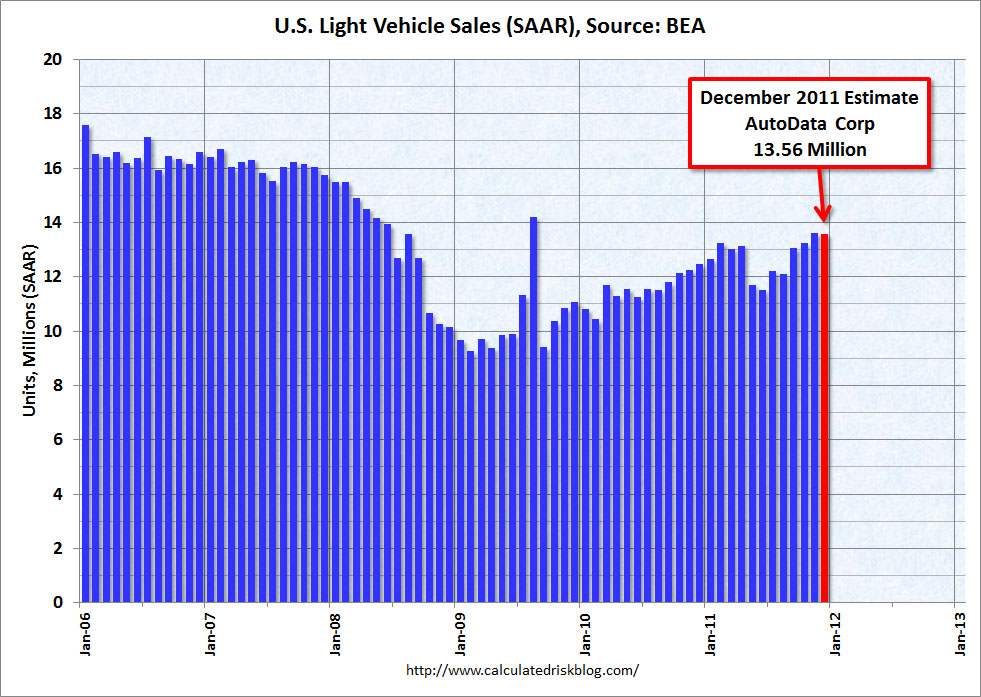 Yes, sales were flat from November to December, but they are exactly as described--the two strongest since Cash for Clunkers in 2009 and August 2008 before that. Also, the fourth quarter of 2011 was the best since the second quarter of 2008. As far as U.S. auto sales are concerned, not only has the situation recovered from the combination of the Japanese earthquake and tsunami along with the spike in oil prices resulting from the Arab Spring, but it's the best it's been since I wrote it's time to party like it's 1929 on my LiveJournal back in September 2008.

Burrowing down into the numbers shows that, while auto sales didn't improve month over month, it was overall a very good year for U.S. auto makers, as the Big Three regained the largest market share in the U.S. market. From Investors Business Daily.


The Big Three U.S. automakers bettered their share of U.S. auto sales to 49.3% in December, up more than two percentage points from a year ago and turning the tables to top Asian makers' 46.3% share, which was down from 49%. In December, Chrysler's market share rose from 19.5% of the domestic makers' sales a year ago to 23.8% as 2012 models of its flagship 300 sedan and midsize 200 proved popular. GM still leads with 40.5%, followed by Ford with 35.6%, according to WardsAuto.

There was even more good news for GM and Chrysler. For GM, it seems that issues with the Volt's battery may be resolved. Again, WXYZ-TV on YouTube reports.

That's it for now. Stay tuned for more news about the NAIAS and a digression about the importance of auto sales as part of increasing demand in an economy.
Posted by Pinku-Sensei at 8:01 AM