In my previous entry, I quoted Calculated Risk on how auto sales will have contributed to GDP when it is computed and released later this year.


Growth in auto sales should make a strong positive contribution to Q4 GDP. Sales in Q3 averaged 12.45 million SAAR, and sales averaged 13.46 million SAAR in Q4, an increase of 8.1% over Q3.

I also made the following promise.


Stay tuned for more news about the NAIAS and a digression about the importance of auto sales as part of increasing demand in an economy.

It's time to follow through by expanding on the second point by demonstrating how important consumer spending in general and auto sales in particular are to GDP, as well as make a point about how necessary demand is to keeping the economy as it is currently structured afloat.

Here is Calculated Risk's latest line graph of U.S. auto sales showing their relationship to recessions for the past 45 years. Note that auto sales declined both before and during each recession, although some of the declines during recessions have been more marked than others, as some of the milder recessions, along with those that began with already depressed sales display more stagnation than decline. Also note that auto sales rose coming out of every recession, sometimes even during its late phases. 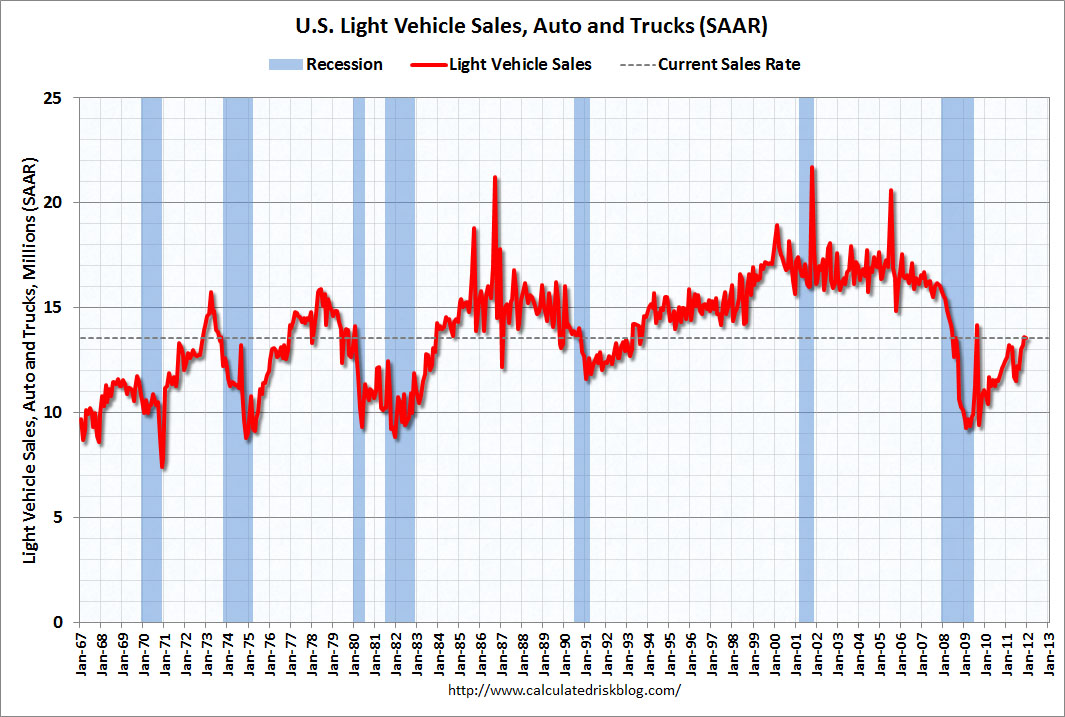 Did you see the two sharp spikes at the ends of the past two recessions? Those are the results of government intervention to stimulate the economy, although of very different sorts, both consistent with the philosophies of the parties in power at the time. The first one occurred when George W. Bush told everyone, in so many words, to keep shopping.


Now, the American people have got to go about their business. We cannot let the terrorists achieve the objective of frightening our nation to the point where we don't -- where we don't conduct business, where people don't shop.

By memetic mutation, this became "go shopping or the terrorists win." Even if Bush didn't say exactly those words, people responded. Just look at the graph of real retail sales below. 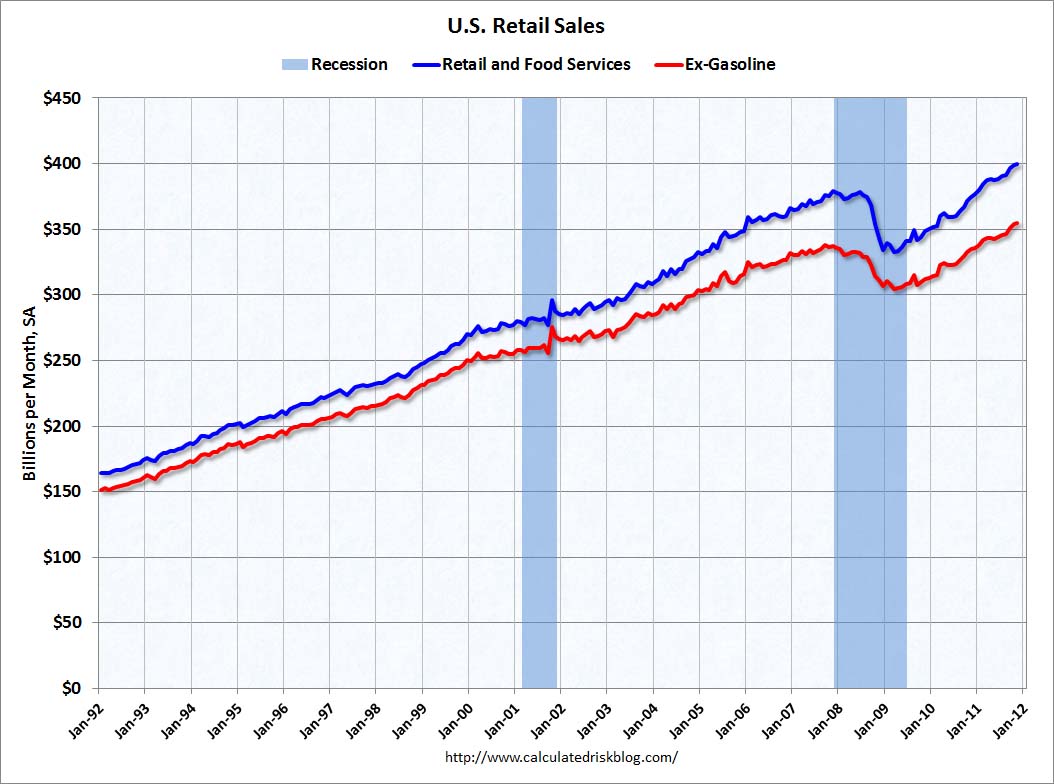 Look at the big spike right at the end of the 2001 recession. People responded to their president's suggestion by whipping out their credit cards and spending. Within a month or two, the recession was over. Honestly, it was exactly what a party with a free enterprise philosophy should advocate, and it worked.  It also showed that Bush was far more afraid of a recession deepening than he was letting on at the time.

By 2009, just about everyone's credit card was tapped out, so that strategy wouldn't work. However, the government sill had credit and other incentives available, and the party in power believed in goverment intervention. So instead of just urging people to spend, it instituted Cash for Clunkers. That worked, not only in stimulating car sales, but increasing real retail sales as a whole. That it also removed a bunch of gas guzzlers from the roads was a bonus. Both instances show that increasing demand works. Keynes was right. So, no, Ron Paul, we're not all Austrians now.
Posted by Pinku-Sensei at 12:01 AM