I didn't know Canute was the King of North Carolina 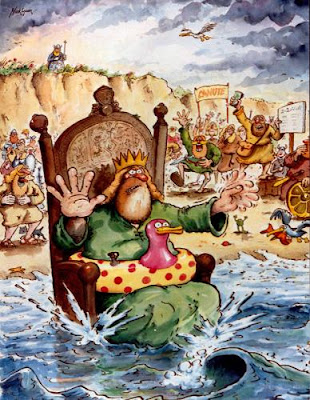 
These are hard days, people are crazyish, and you just have to soldier on, right? But then it turns out that North Carolina legislators are now tossing around bills that not only protect themselves from concepts that make them uncomfortable, they’re DETERMINING HOW WE MEASURE REALITY.

In a story first discussed by the NC Coastal Federation and given more play May 29 by the News & Observer of Raleigh and its sister paper the Charlotte Observer, a group of legislators from 20 coastal NC counties whose economies will be most affected by rising seas have legislated the words “Nuh-unh!” into the NC Constitution.

Okay, cheap shot alert. Actually all they did was say science is crazy. There is virtually universal agreement among scientists that the sea will probably rise a good meter or more before the end of the century, wreaking havoc in low-lying coastal counties. So the members of the developers’ lobbying group NC-20 say the sea will rise only 8 inches, because … because … well, SHUT UP, that’s because why.

That is, the meter or so of sea level rise predicted for the NC Coastal Resources Commission by a state-appointed board of scientists is extremely inconvenient for counties along the coast. So the NC-20 types have decided that we can escape sea level rise – in North Carolina, anyhow – by making it against the law. Or making MEASURING it against the law, anyhow.


I'd be tempted to tell them the story of King Canute (Knut), who ordered the tide not to go in, but I doubt it would have the desired effect. Instead, they might take after Xerxes, who ordered the sea be given 300 lashes, fettered, and branded after a boat bridge across the Hellespont was destroyed by a storm.

The difference is that Canute knew full well that the sea wouldn't comply. I don't think these people care whether it does or not.
Posted by Pinku-Sensei at 10:55 AM