In Space and astronomy stories for the week of the annular eclipse, the story below the jump was about the scrubbed launch of SpaceX's Falcon/Dragon to the International Space Station. This week, that story gets top billing both here and in Overnight News Digest: Science Saturday (Dragon docks with ISS edition) at Daily Kos. Pride of place goes to the Los Angeles Times' article on the event.


Less than 24 hours after a historic docking, astronauts aboard the International Space Station clambered into SpaceX's unmanned Dragon spacecraft and began unloading supplies that were packed inside.

Wearing oxygen masks as a precaution, the astronauts opened the hatch, slid the door open, and took delivery of the 1,014 pounds of food, water and clothing aboard Dragon.

"Like the smell of a brand new car," said NASA astronaut Don Pettit, after going inside.

Live coverage of the hatch opening, which included some of the first video footage from inside the cone-shaped Dragon, started Saturday shortly before 3 a.m PDT on the Hawthorne company's website and NASA TV.

Enter The Dragon on This Week @NASA

The crew of the International Space Station opened the hatch of the recently berthed SpaceX Dragon capsule, the first commercial craft to fly to the ISS. Also, Venus Transit, Fallen Heroes, Carbon-Sensing Sherpa, and more.

That's not the only video I posted. Here is SpaceX Dragon COTS 3 Rendezvous Grapple Berthing Timelapse. Note: there is no sound with this video.


I wasn't the only diarist at Daily Kos to comment on the occasion yesterday. DarkSyde used the story to headline This week in science: Catch a Dragon by the tail and kindler placed it in a sustainability context by comparing and contrasting Forward vs. Backward: SpaceX vs. Heartland. That latter diary earned a distinction of getting a lot of recs and tips, but no comments. That's the equivalent of a silent standing ovation, a great sign of respect.

Click on "Read more" for the rest of the week's space and astronomy news.


First, two stories about water elsewhere in the Solar System.


The Voyager 2 spacecraft flew past Triton in 1989, sending back images of the moon's frozen surface. They revealed signs of cryovolcanism – the eruption of subsurface liquids which quickly freeze when exposed to the cold of the outer solar system. As such, Triton joins a short list of worlds in the solar system known to be geologically active.

Its surface ice is unique, too: largely composed of nitrogen, with some cantaloupe-textured terrain, and a polar cap of frozen methane.

But with a name like Triton – the messenger of the big sea in Greek mythology – this moon should really carry one more feature: is there an ocean hiding beneath its icy veneer? A new model suggests there could be. Understanding why requires a quick look at Triton's unique history.

Moving in to the center of the Solar System (and skipping Enceladus), one finds another world with water. 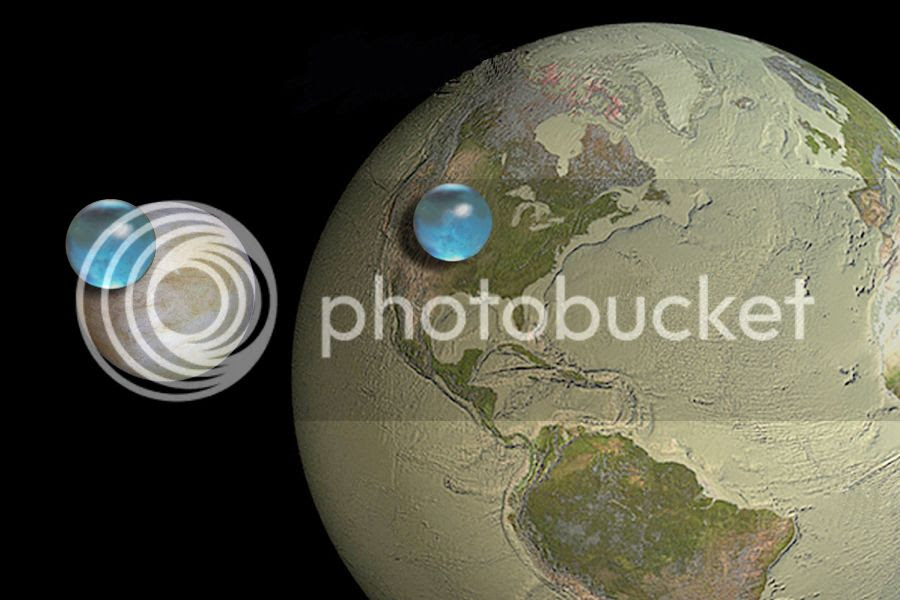 
Remember that image from a few weeks back that showed Earth with all its water gathered up in a sphere beside it? Well here's that image again, only this time, it also features Jupiter's moon Europa, along with all of its water. Notice anything interesting?

Based on data acquired by NASA's Galileo satellite, astronomers think the global oceans sloshing around beneath Europa's icy exterior are likely 2—3 times more voluminous than the oceans here on Earth. Not 2—3 times more proportionally, 2—3 times more in total volume.

Yeah. That "little" moon is packing quite the supply of H2O — and with it, scientists think, a significant chance of harboring life.

As water on other worlds wasn't enough, how about carbon?


WASHINGTON -- NASA-funded research on Mars meteorites that landed on Earth shows strong evidence that very large molecules containing carbon, which is a key ingredient for the building blocks of life, can originate on the Red Planet. These macromolecules are not of biological origin, but they are indicators that complex carbon chemistry has taken place on Mars.

Researchers from the Carnegie Institution for Science in Washington who found reduced carbon molecules now have better insight into the chemical processes taking place on Mars. Reduced carbon is carbon that is bonded to hydrogen or itself. Their findings also may assist in future quests for evidence of life on the Red Planet. The findings are published in Thursday's online edition of Science Express.

"These findings show that the storage of reduced carbon molecules on Mars occurred throughout the planet's history and might have been similar to processes that occurred on the ancient Earth," said Andrew Steele, lead author of the paper and researcher from Carnegie. "Understanding the genesis of these non-biological, carbon-containing macromolecules on Mars is crucial for developing future missions to detect evidence of life on our neighboring planet."

Pity these carbon atoms show no evidence of having been produced by living things.

As if news about Mars wasn't enough, how about its moons?

Daily Kos: Getting to Know Your Solar System (14): Phobos & Deimos
by Troubadour

Speaking of moons, here is more about the annular eclipse--as seen from the Moon.

Arizona State University: In the Shadow of the Moon


What does a solar eclipse look like from the Moon? The LROC NAC captured four images of the Earth, two on each of two successive orbits, during this solar eclipse. In these images you can see the Moon's shadow passing over the Earth over a period of about two hours.


The College of Education at Texas Tech announced a NASA astronaut has been accepted to its doctoral program in education.

Joseph Acaba launched May 14 for a four-month tour of duty aboard the Russian Soyuz TMA-04M spacecraft as part of the team for Mission 31/32 to the International Space Station. He also has been accepted to Texas Tech’s new Blended Delivery Ph.D. in Curriculum and Instruction with Specialization in Science Education for the cohort starting this fall.

University of Louisville: Portable planetarium will offer ‘out of this world’ experiences
by Cindy Hess, communications and marketing — last modified May 25, 2012 01:36 PM


A portable planetarium that can be set up in 45 minutes and accommodate 20 adults or 30 children will soon begin road shows to area schools and community events.

The University of Louisville unveiled the Owsley Brown II Portable Planetarium at a news conference May 25. When inflated, the dome is 13 feet high and has an internal screen that measures 21 feet across.

The dome has been on the “wish list” of UofL’s College of Education and Human Development for years because administrators believed it an ideal way to generate interest in math and science topics, especially for K-12 students. The portable planetarium and its programs are part of the college’s Gheens Science Hall and Rauch Planetarium.

As you can see, it's the busiest week so far for this series. I wish all of the installments were this full and this fun!
Posted by Pinku-Sensei at 7:52 PM