Some good came out of the "Inflamed Duck" session after all 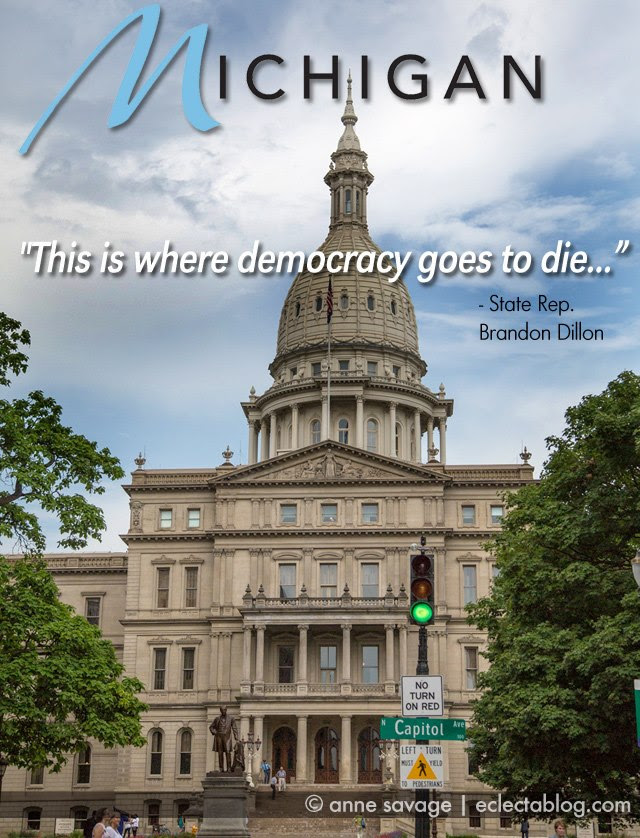 Original at Electablog, who coined the term "Inflamed Duck."

The Inflamed Duck wasn't all bad, although it came pretty close, what with Right To Work For Less, expanded concealed carry, restrictions on abortion, a new emergency manager law, repealing the business property tax without replacing it, and making recalls more difficult.  Three in particular, Right to Work For Less, restrictions on abortion, and the zombie emergency manager law, stand out as examples of how Michigan has become Ignoreland.  The protests against the first two were the largest and second largest demonstrations on the Capitol grounds in Lansing this century, if ever, and the voters rejected the previous emergency manager law at the ballot box just last month.  Welcome to life in a republic, not a democracy.

However, some good things happened, along with some bad things not happening.  Follow over the jump for the list from the Detroit Free Press.

The best thing to come out of the Inflamed Duck session, in both my opinion and the Free Press's was the creationg of a Regional Transit Authority.


Creates an authority to coordinate public transportation in southeast Michigan.

It would coordinate the city and suburban bus service provided by the Detroit Department of Transportation (DDOT) and SMART, respectively. It also would spearhead the creation of a bus rapid-transit system and ultimately light rail.

The authority would have the ability to seek millages to run public transportation, but each county would have to approve any request before it went on the ballot.

I've been waiting on this one for a very long time.  I've even been telegraphing it over at Kunstler's blog.  Two weeks ago, I suggested two topics.


As for what's coming up, how about the future of mass transit in Detroit and the unintended effects of redistricting?

That got sidelined.  I knew already that if the Republicans brought up Right To Work For Less, the Democrats would play hardball with an issue that both they and Governor Snyder wanted, but which the Republicans weren't so hot for.  That ended up happening, as the next week, as I teased Kunstler's readers again.


I'll have more sustainability news on the topics I covered already, along with how Right-To-Work (for less) is screwing up metro Detroit's plans for mass transit. Yes, really.

The Democrats, other than Lame Duck Lesia Less, who lost her primary to a more liberal Democrat, all withheld their votes, which kept half of the bills required to make the Regional Transit Authority work from passing.  Once Snyder signed RTWFL, they relented.


The remaining bills in the package passed the Legislature during the Thursday-Friday session.

This is very good news and will help make Detroit more sustainable and commuter friendly.  In particular, the lack of a Regional Transit Authority was one of the things holding up light rail.

Two other bills passed that help Detroit.  The Free Press ranked the approval of a Detroit Lighting Authority higher.


The bill would transfer power over Detroit’s troubled public-lighting department to a public authority that would have the ability to issue bonds to start paying for much-needed repairs. On any given day, more than half of the city’s 85,000 streetlights aren’t working, according to official estimates.

Also approved as part of the package was a tax component bill that would allow the city to continue its 2.4% income tax on city residents and 1.2% on nonresidents until the bonds for the lighting authority are paid back. Once those bonds are paid off, the rate would drop over two years to 2.2% on residents and 1.1% on nonresidents. That added revenue would be used for police services.

I blogged about Detroit's inablility to keep its street lights lit in Detroit's problems as tragedy and farce.  At first the legislature refused to help, but it looks like they did the right thing after all.

The other action that helped Detroit involved the city's Downtown Development Authority.


The state House passed the bill Thursday. It would allow Detroit’s Downtown Development Authority to continue to capture funds — about $12 million a year — to help pay for infrastructure needs associated with the $650-million proposed Red Wings arena and entertainment district that Mike Ilitch’s Olympia Entertainment organization hopes to build in downtown Detroit.

One last thing that passed the legislature is probably good for all of Michigan.


The Legislature passed a bill that would prohibit young drivers from talking on a cell phone while driving.

“Kelsey’s Law” would prohibit young drivers who have a graduated license from talking on a cell phone. It was named for Kelsey Raffaele, a 17-year-old from Sault Ste. Marie who was killed in a car crash on Jan. 24, 2010.

Yet another restriction on young drivers to keep them and all the rest of us safer on the roads.  Good thing I look too old to be affected.

Finally, three really bad ideas did not make it through the Inflamed Duck.


A bill that would allow providers and medical insurers to refuse service or payment based on a moral objection, religious beliefs or matter of conscience did not pass in the House in the last lame-duck session. It won’t come up again before next year.
...
A bill to expand and codify the Education Achievement Authority for poorly performing schools did not get out of the House Education Committee.

The authority, created in 2011 through an interlocal agreement, continues to exist and consists of 15 schools that were formerly part of Detroit Public Schools.
...
A bill that would allow buyers of boats and cars to pay sales tax on only the difference between their trade-in value and the purchase value did not get through the state House.

Buyers will have to continue to pay sales tax on the entire purchase value of new or used boats and cars.

The first two will come up again next year, but will have a more difficult time making it through the House, as it has a smaller Republican majority.  As for the third, that looks like it might not show up again, as it reads like a lot of people think it's a bad idea that starves the state of revenue.

Here's to neither of these bad ideas passing.  I'd hate to see them exported as solutions to the continent's problems.

Crossposted to Michigan Liberal.
Posted by Pinku-Sensei at 12:50 PM