In last month's driving update, I made the following observation and promise.

While I'm on the subject of my wife's car, it also passed a milestone this past August--83,000 miles on August 13th.   As of this afternoon, it had barely reached halfway to 84,000 miles.  I'll do my best to keep track of the miles driven on it as well from now on.

Yesterday, her car's odometer rolled over 84,000 miles.  That's 1,000 miles in 132 days, which means my wife and I my wife and I drove the car 7.58 miles/day and 231 miles/month.  I can't compare that number to the previous mileage for the car unless I dig out the sales receipt with the odometer reading and date, which I'm just not up to doing right now.  However, I can add it to the 11.5 miles/day and 350.6 miles/month I drove from August through November and again to the next mileage figure I get in February or March to get a total miles driven for the household.  That means that my wife and I drove our two cars an average of 19.1 miles/day and 581.6 miles/month since August.  I won't be able to say until April at the earliest whether this means the total miles driven by the two of us is going up or down, but at least I now have a baseline.

As for all the nation's drivers, Bill McBride at Calculated Risk just updated the total miles driven yesterday, reporting that Vehicle Miles Driven increased 0.3% in October and including the following from the Department of Transportation:

As for the long-term trend, it's still moving sideways after falling from the peak in December 2007, five years ago. 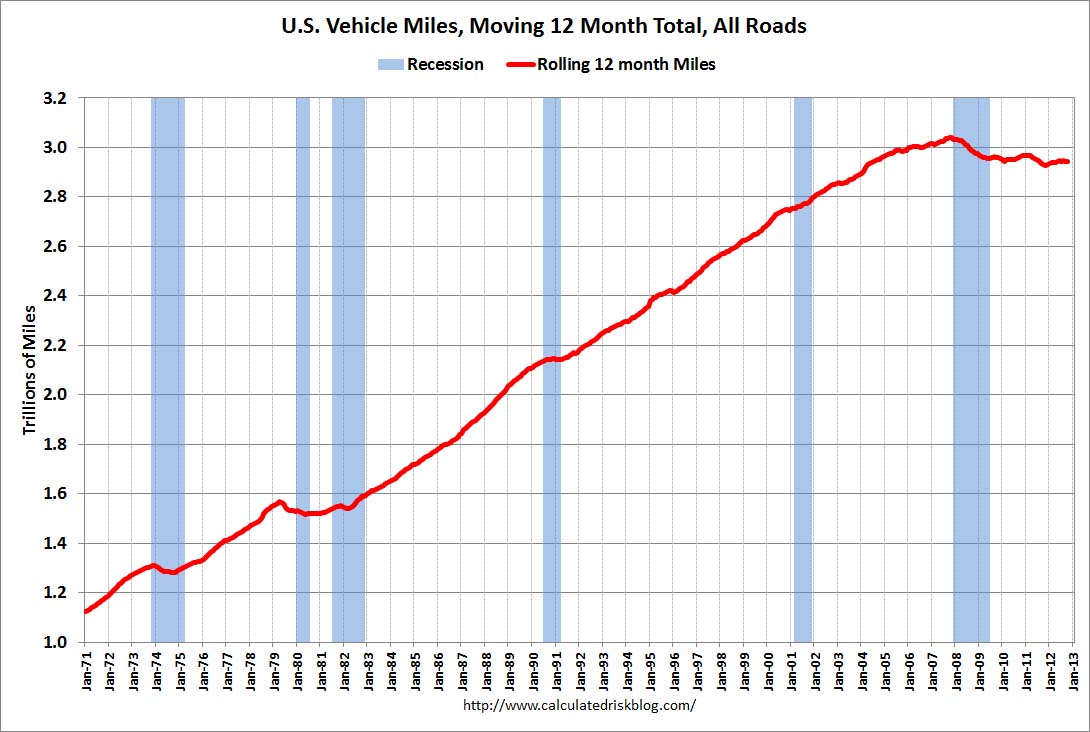 In his very next entry, McBride quoted the latest on gas prices from CNN: Gas prices slide, but the decline won't last, survey says

The average cost of a gallon of regular gasoline is $3.26, down 58 cents over the past 11 weeks, the Lundberg Survey found.

But that good news at the pump is unlikely to continue, says publisher Tribly Lundberg.

“Higher crude oil prices are translating into higher wholesale gasoline prices,” and retailers will need to pass them through, she says. Expect prices to jump 5 or 10 cents per gallon soon.

That happened here already.  The day after I posted Gas price rollercoaster drops to 2012 low--so far, the price at the corner station fell again to what is likely to be the low for the year, $3.15/gallon.  The next day, it rose to $3.25, while the three stations a few blocks away actually dropped their prices to $3.08, also their lows for the year.  That was too unstable a situation to persist, and as of three days ago, all four stations are now selling regular for $3.18.  That's still lower than my last report, even if it isn't the very lowest price of 2012.

As for that increase in price, the Gas Buddy graph at the Calculated Risk entry reflects it already.  I personally think that the current low price will hold until the new year, at which time it will start going up again.  Until then, it's time to use this taunting macro.  I may not have another chance.