Brad DeLong passed along Eric Loomis's astonishment at the high degree of racial sorting among voters in the Deep South, especially Mississippi.  I'm not going to comment on the main point, that racism is so engrained there; the commenters at both DeLong's blog and Lawyers, Guns, and Money do a much better job of it.  Besides, Detroit has enough of its own issues in that regard for me to write about.  I don't need to go far afield for examples.

Instead, I'll pass along an observation about a tangent raised by one of DeLong's commenters, Brian J that doesn't apply to Michigan, but might be endemic to the South.


I've long suspected that part of the problem is that Democrats just don't compete in some of these states. It's easy to understand why, but unless the vote is very, very inelastic, figure that merely being there asking for votes will up our percentage of the white electorate. That's not to say that it will suddenly shoot up to 50 percent or so, only that it wouldn't look as lopsided if we were there. And depending on the state, doing just a little better would make us competitive.

Commenter Nils followed up with a supporting detail.


Brian J, you've got something there. My dad had an anecdote from the 1940's in Durham North Carolina. The local GOP had to basically draw straws to 'compel' some unlucky person to run on the GOP ticket for local office, because they knew that there was NO chance of winning. The parties have reversed roles but the odds are the same. However, the GOP kept putting up candidates- and are the Dems doing that now???

That inspired me to contribute my answer, which was "no, they're not, but the Libertarians are."


I'll give you an example of a state in the South where Democrats are not competing as completely as they could--Louisiana. This year, Democrats contested only three of the state's six congressional districts, the 1st, 2nd, and 3rd. They only won the 2nd, which includes New Orleans and Baton Rouge. They could have at least run a candidate in the 5th, which includes three counties along the Mississippi River where majorities voted for Obama.

About the only good news for Democrats in all this was that Louisiana lost a seat, so two Republican incumbents ran against each other, resulting in one fewer GOP Representative in the U.S. House.

I know several people from Louisiana who would qualify as liberal, but they won't vote Democratic.  Instead, they're Libertarians.  I even told one of them to go ahead and vote for Gary Johnson, as her vote would not harm Obama and would be a valid protest against Willard the Rat.  If more people follow their lead, then Louisiana's politics will become even more interesting.  In particular, I'd like to see how the Libertarians' combination of laissez faire philosophy and general idealism will interact with the notoriously corrupt political culture of the state.  Also, I expect their ideas of social freedom might not play well with the religious culture down there.  Either way, laissez (faire) les bons temps rouler!

First, here's the map of Louisiana Congressional Districts from Ballotpedia.

Second, here's the map of the presidential vote by county in the South for 2008, which clearly shows the three counties along the Mississippi River in northeast Louisiana. 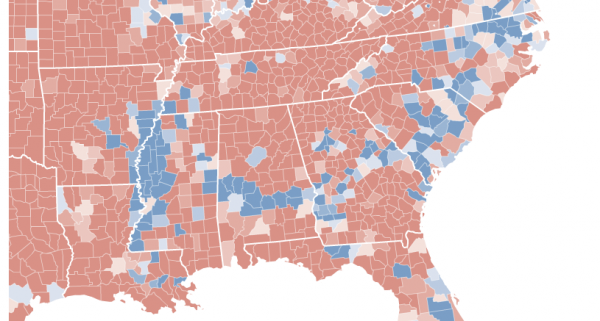 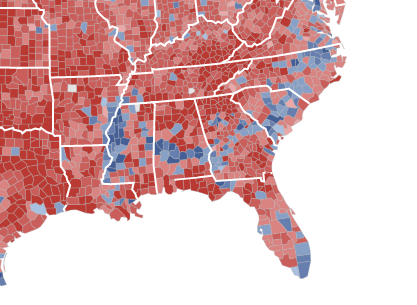 Yes, the Democrats definitely have a base of support in the Fifth District of Lousiana that they are ignoring by not running candidates there.

Finally, I took both of those maps from Deep Sea News, which connected the pattern of Democratic voters to the location of the shoreline during the Cretaceous. Faulkner had no idea how right he was when he wrote, "The past isn't dead. It isn't even past."

Hat/tip to Narb for telling me about the Deep Sea News post.
Posted by Pinku-Sensei at 12:01 AM