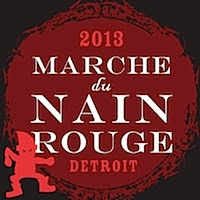 In The first year of Crazy Eddie's Motie News: Part 8 of several, I mentioned two phenomena in the same breath.


I also note that Hipsters have found Detroit an "inhabitable city." The brewers of Pabst Blue Ribbon will be thrilled to have another market. Also the Nain Rouge, Detroit's own Red Dwarf and local ill omen, has hit the big time among devotees of the paranormal. Yes, even Detroit's demons are becoming cool. Just hope you never see the Nain Rouge. He's a harbinger of disaster.

It turns out that my juxtaposing hipsters and the Nain Rouge turns out to be more than a coincidence, as one can gather from reading between the lines of the Free Press reported Sunday.


We're talking about Le Nain Rouge (The Red Dwarf), the malicious prankster who will be honored, banished or (hopefully) placated by a procession down Cass Avenue today.

How malicious? Well, Antoine de la Mothe Cadillac, the founding father of our town, credited this "small child-like creature with red or black fur" with some serious financial reversals to his bank account. The Red Dwarf was also spotted in 1763 when 58 British soldiers fell to Pontiac's warriors at the Battle of Bloody Run. The 1805 fire that gave the city its "rise from the ashes" motto? He was seen that time as well. An 1884 account indicates that the joker's appearance didn't improve much during the intervening years; a woman who claimed to have been accosted by the creature described him as "a baboon with a horned head ... brilliant restless eyes and a devilish leer on its face."

WXYZ illustrates the history of the imp and interviews someone who portrays the supernatural bogeyman in Detroit's legendary Nain Rouge talks to WXYZ's Stephen Clark.

Can all of Detroit's problems be blamed on one evil spirit? That's the idea behind the legend of the Nain Rouge. Sunday, Detroiters will parade through the streets to banish the troublesome "red dwarf" during the Marche du Nain Rouge.

7 Action News anchor Stephen Clark had the opportunity to interview the Nain Rouge for the evil spirit's first TV interview in over 300 years of haunting the city.

Note who is marching in the parade--hipsters. Also note the timing of the revival of the festival in the following passage from the Free Press article.


The Marche du Nain Rouge itself may be described as the ultimate tip of the hat. A 2010 revival of a custom that originated in Ft. Pontchartrain days, it has become an unofficial civic event where participants are encouraged to wear costumes, play instruments, sing, shout and join in banishing the Nain Rouge for at least one more year.

Organizers of the Marche du Nain Rouge talk to Tara Edwards on 7 Action News. The Sunday afternoon event takes place from 1 to 3:00 p.m.

As I wrote, hipsters are running this event. Mind you, I think this is a good thing, but realize that it sometimes takes enterprising outsiders to realize what lost traditions help define a place and should be revived.
Posted by Pinku-Sensei at 12:25 AM