S&P advances as Dow has third record in a row

In last night's installment on the rampaging bull market, I decided to shift my attention to the S&P 500.

The Dow may be well-known and flashy, but it's not the best indicator of the strength of the stock market; the S&P 500 is.
...
It looks like I've been using the wrong index to look for a top.  I should be using the S&P 500.  Time to switch my attention.

I may not have long to wait, as Reuters reports.

The Dow and the S&P 500 were both up for their fifth straight days as investors looked for opportunities to buy into the recent rally. However, caution ahead of the jobs report curbed gains and kept the S&P more than 1 percent below its record close.
...
The S&P financial index .SPSY added 0.7 percent and hit an intraday high.

That was not the entire S&P 500, just the financials.  The rest of the index is still 2 percent off its high.according to CNN.  I'll quote CNN lather.  Right now, I'll continue with Reuters.

During Thursday's session, the Dow climbed as high as 14,354.69 - its third straight intraday record high.

Now I'll quote CNN for the impetus for a third consecutive record-setting day.

The recent rally has been driven by a series of strong economic reports, particularly related to the job market and manufacturing, said Marc Chandler, strategist for Brown Brothers Harriman.

The U.S. economy has proven itself "fairly resistant to the fiscal cliff and the sequester," he said.

Ahead of Thursday's open, the Department of Labor reported that initial jobless claims fell to 340,000 last week. That was down from an upwardly revised tally of 347,000 the prior week and lower than the 350,000 forecast economists had expected.

This week's report on private-sector job growth from payroll processing firm ADP was also better than expected, raising hopes that Friday's February jobs report, due before the opening bell, would also be strong.

Economists surveyed by CNNMoney expect a gain of 170,000 jobs for the month.

Other than calling for a top, which I'll hold off on until the S&P 500 hits a new nominal high, I'll point out something else.  While the Dow is setting new nominal records, the index itself is not in new territory as far as real values go.  Barry Ritholtz has the graphic. 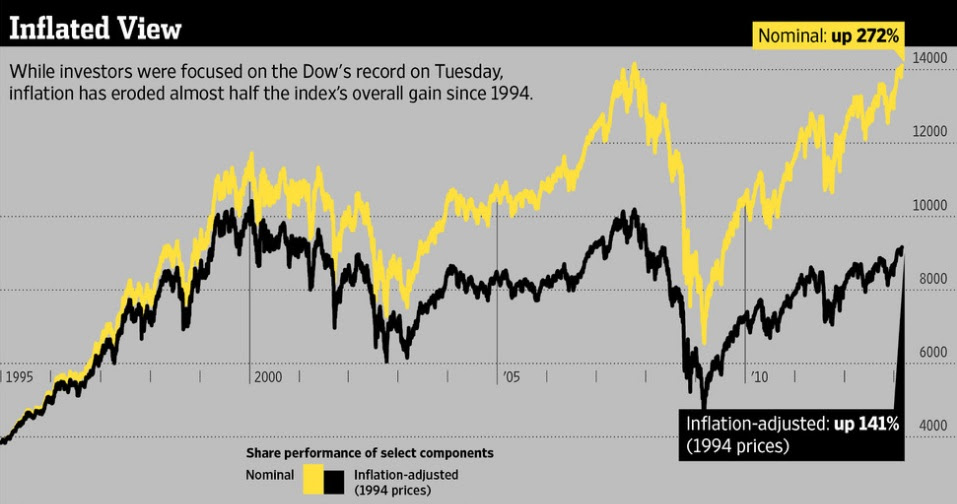 The current nominal values are nowhere near the peak real values.  That's actually a bullish sign.  The last time the real values approached the previous real-value peak, the bull market ended and the slide into the Great Recession began.

Ritholtz has one more graphic on the topic.  The current bull market in the S&P 500 is one of the top ten in terms of increased value.  Also note that the closing record is less than 24 points away.

It's hard to maintain any short-feeling of DOOM with numbers like these.  The long-term risk is still terrible, but that will be the subject of other posts.
Posted by Pinku-Sensei at 7:00 PM