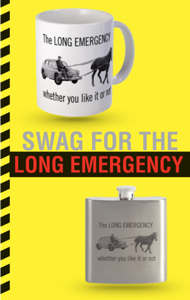 For this blog's 1000th post, I look back at the most viewed entry in the history of the blog so far according to the primary view counter, Happy 4th of July from James Howard Kunstler's Tea Party! While I posted this response to Kunstler's My Tea Party on July 4th, 2011, it was not among the top ten posts from the first year of the blog as of March 21, 2012. Follow over the jump for the story of how I came to write the entry and how it went from obscurity to the most read piece of writing here at Crazy Eddie's Motie News.

I had been thinking about converting my comments to Kunstler's My Tea Party into an entry for quite a while, but it took the July 2011 Nablopomo theme of Swim to convince me to follow through, as Kunstler is a good example of a blogger who swims against the stream on issue after issue. In Sustainability news from Michigan's research universities for the week ending July 2, 2011, I finally came out and said so.


I might also make a special post on July 4th to observe Kunstler's My Tea Party, which was posted almost exactly a year ago. He's also swimming against the flow in that one. Since I'm a member of Coffee Party USA, I really can't leave that opportunity unexploited.

I repeated my intentions over at Kunstler's blog the morning before I followed through.


I've twice before remarked about your anti-immigration stance and how it conflicts with your self-identification as a liberal, the first time a year ago in "My Tea Party," an entry of yours that I really enjoyed, and two weeks ago in "Man Down," in which I found three of your paragraphs about gender equality troubling and also conflicting with your political identification.

Over at Crazy Eddie's Motie News, I'm participating in National Blog Posting Month, in which bloggers post every day of the month on the monthly theme of "swim." One of the interpretations of that theme is "bloggers swimming against the stream," something you do regularly. I already have one commentary on "Man Down" on the site and plan another, plus one on "My Tea Party." There are some things that require more room and formatting to say than can be said in a comments section.

As you can see, Kunstler himself raised the issue at just the right time to get me to write what I had been thinking about for some time. That comment also prompted a series of responses that became the basis of another entry, Impaling Vlad, or With friends like this, Kunstler hardly needs enemies, but that's a topic for another post. Instead, I'll note that I thought that promoting the entry in advance would be enough, so I didn't even bother to promote either the 4th of July post or Impaling Vlad at Kunstler's blog the next week, instead highlighting Julie Bass's struggles with Oak Park over the vegetable garden in her front yard. Consequently, I have to rely on the summary I included in Weekly Roundup for July 3rd through 9th, 2011 to describe the entry.


Kunstler may consider himself a liberal, but he's very much the classic conservative on a range of issues. I pointed that out in Happy 4th of July from James Howard Kunstler's Tea Party!... In that post, I not only highlighted Kunstler's positions that conflict with most liberals, but also told him and his readers that the ones that don't fit right in with those of the Coffee Party.

I was even more explicit about how Kunstler's views both matched and conflicted with the Coffee Party's in the entry itself.


Here is a post from a year ago by social critic and author James Howard Kunstler in which he describes what his Tea Party would look like. Other than his stance on immigration and his unorthodox austerity agenda in his last paragraph, I suspect much of his agenda would be in alignment with ours. Maybe he'd be worth interviewing on a blog talk radio program.

Despite all this effort, the entry languished for a year with about 10 page views, although it did garner 2 comments the first day. Then, people searching for "happy 4th of july" and "4th of july" discovered it a year later, making those phrases the fourth- and sixth-most commonly used search terms in the history of the blog with 214 and 146 uses respectively. The result was a meteoritic rise from nowhere to the top of the charts that I first documented in Happy July 4th from Crazy Eddie's Motie News!


In other news, Happy 4th of July from James Howard Kunstler's Tea Party! has gone viral during the past few weeks, going from about 10 page views to more than 400, nearly 200 of them in the past day alone. It's now the fifth most read post in the history of this blog. If you haven't read it, check it out.

The entry's rise in the rankings continued throughout the week, so that by July 13th, it had claimed the number one spot, something I called the revenge of the back catalog.


Last week, the back catalog champion was Happy 4th of July from James Howard Kunstler's Tea Party!, which went from about ten page views to more than 800 in the space of a month, with 700+ of those views last week and ~500 of them on July 4th alone. This post is now the most viewed ever on the site with 888 views.

I repeated those stats in The first year of Crazy Eddie's Motie News: Part 6 of several.


So, which of my posts am I featuring today? The one that was in 10th place with 215 page views and no comments--that is, until the revenge of the back catalog hit on July 4th, propelling Happy 4th of July from James Howard Kunstler's Tea Party! from about ten page views to more than 800 in the space of a month, with 700+ of those views the week of July 4th and ~500 of them on July 4th alone, making it the most viewed ever on the site with 888 views and knocking The New York Times explains how to completely avoid the real problems of suburbia, posted on May 8, 2011, completely out of the top 10.

In this case, rankings really are a zero-sum game. Not everything can be a win-win situation, in which case for every winner, there has to be a loser.

Speaking of losing, the primary page view counter, which I've been using as the offical source of stats for this blog, has a distressing tendency to show that entries lose page views over time. As of March 21st, the top entry had 879 views, down from the 888 it showed on July 13th.  I have no idea why this happens.

On the other hand, the secondary "unofficial" counter shows that it has 1088 page views, which places it in second behind Dungeons and Dragons alignments for Game of Thrones characters according to the secondary counter, which I noted in Second Year of Crazy Eddie's Motie News: Top post of 2012 had 1338 page views--unofficially. However, I'm using the 867 page views according to the primary counter, which is the official one, so the review of Kunstler stays in first place.

One final note about this post. Unlike the most common strategy for the top posts of 2011, I didn't use a comment on a New York Times article to draw in readers from Kunstler's blog. Instead, I used my comments on a Kunstler entry to bring in readers from elsewhere. It only took a year for it to work.