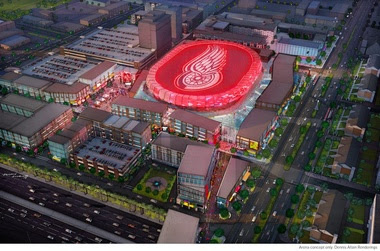 When I drove downtown for Netroots Nation and the water protests, I realized that I had never seen Detroit so full of life.*  A large part of that were the crowds of Tiger Fans crossing Woodward and streaming into Comerica Park both nights.  It looks like Red Wings fans in the winter will join Tigers fans in the spring and summer and Lions fans in the fall, turning the area into a year-round sports attraction.  WXYZ has the video report in Closer look into new sports and entertainment district plans.


A gargantuan 3-year plan: 5 new neighborhoods, a $450 million hockey arena and an accelerated timeline to complete it all

A DRAMATIC TRANSFORMATION OF THE HEART OF DETROIT will begin in September, when the Ilitch family breaks ground on the construction of a $450 million Detroit Red Wings arena concurrently with another $200 million in apartments, restaurants, office buildings, parks and shops over 45 blocks. This is the city’s entertainment district, super-sized.

Planned is a gargantuan three-year construction project to create five new neighborhoods intended to stitch together the city where it’s divided by the trench-like Fisher Freeway underneath Woodward Avenue.

The 650,000-square-foot hockey and events center and the new neighborhoods — including hundreds of apartments to be built both outside Comerica Park and the new hockey arena — are scheduled to be ready by summer 2017.

I'd noticed the large vacant expanses between Foxtown and Midtown and wondered what would become of them.  Now I know.  I'm looking forward to seeing it completed, just in time for the M1 light rail to serve it.**

*My students have noticed it, too.  For the first time, I had a class discussion about Detroit's urban issues and heard more hope and optimism than doom.  As part of that conversation, they remarked that they'd never seen so many people downtown after dark.  Here's to those trends continuing.

**I have an update on that project, too.  MLive reported last month Woodward Avenue in downtown Detroit to close as construction of M1 Rail begins.

M1 Rail representatives said in an email Friday that work on the 3.3-mile lightrail line will close Woodward from Adams to Campus Martius Park for about 120 days.

As I was driving along Woodward downtown, I noticed how narrow the street was and wondered how the light rail line would be installed while keeping the street open.  The answer is that the street will be closed.  I'm glad I've been warned.
Posted by Pinku-Sensei at 10:57 PM