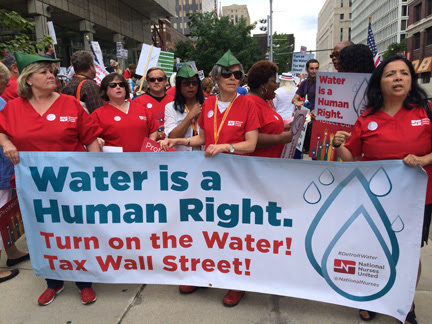 I mentioned in Detroit's bankruptcy, one year later that "Detroit's water crisis will be a topic at Netroots Nation."  It was a bigger deal than I expected, as WXYZ reports in Hundreds gather downtown to protest Detroit's water shutoffs.


I joined that peaceful demonstration as one of the many from Netroots Nation.  That went pretty smoothly, as the protesters had the cooperation of police.  Another protest elsewhere in the city against water shutoffs didn't fare as well, as WXYZ reports in Protesting water shutoffs: Demonstrators face Detroit Police.


In other news, Elizabeth Warren spoke.  That will be the topic of another update.
Posted by Pinku-Sensei at 11:55 AM